France is killing the fun

Please change the french, it’s completely boring to always play against france, civilization is too strong, it’s ruining the fun of playing

Make Spears and horsemen if he makes archers.

I prefere play against some french rush knight than full turtle china for sure .

But the civ design is quite boring indeed, mostly nothing very specific.

Build spearmen & archers to defend your base, while your economy is growing.
Keep in mind that the French player most often goes all in for push in feadul age, so unless he is successful you will get the uper hand if defended the early push.

It takes some time to get used to this tactic, but it’s not impossible.

I don’t understand why some civs have access to tier 2 knights, I know French are a cav civ but they could have implemented better horseman and then in tier 3 unique knights, like you will always see french going knight rush, every single game, where is the gameplay variation? I don’t play for quite some time but I know is the same thing for some months ago, just by looking at this forums and some YouTube videos.

I decided to just join them. I started with Abbasid main, but found French aggression to be more fun to play. I do agree that this can get stale for some people. French mirrors are always fun, because then strategies start to get a bit more interesting. Do you out-raid your opponent? Get your knight out quicker? Do you go for spears to defend and boom?

You used to be able to trade well against French knights with horsemen, but I think they changed that a few patches/updates ago.

They don’t need to do any dramatic changes to the French.

Simply just add Preferances against who you wanna match up against.

It would encourage people to try out more Civs and prevent the games becoming to monotone the way they are now, where 90% of matchup is against French/English.

I personally would love to play more against Abbasid and Dheli, but thats like once in a blue moon.

France is not OP at all:

I do not understand the constant whining about France. Their playstyle is very predictive, all you need to do to beat them is:

For me its not winning or losing, i just play for fun. And right now i’m forced to play almost always against France, it’s just not fun.
Always the same game over and over again.
It’s an easy civilization to play and is very strong, which makes many players use.
O think they should change something on the civ, or as i read on one of the comments, create a system to ban certain civs

For me its not winning or losing, i just play for fun. And right now i’m forced to play almost always against France, it’s just not fun.

create lobby and kick French out.

You do not like to play against civ, but want be forced others.
I love to play French.
10 games in ranked 9 wins. French players is predictable, and super easy to counter.
As English: fast feudal + tower on gold immediately, add pickes == GG to French player.

I mean, i want opponents to pick civs. and force them to pay French.

You do not like to play against civ, but want be forced others.
I love to play French.
10 games in ranked 9 wins. French players is predictable, and super easy to counter.
As English: fast feudal + tower on gold immediately, add pickes == GG to French player.

I mean, i want opponents to pick civs. and force them to pay French.

But setting up custom games leaves you waiting forever in qeue if you wanna matchup on similar skill level.

Another issue with custom games is that a lot of players like to cheese them by adding some lol-tuning pack last minute before starting.

While being able to create custom games is great and all.

But I’d get a much higher chanse being matched up against other Civs.

It’s just as you say, English and French are super easy to predict.

The problem is here, I want to LEARN to play the game against other civs!

I barely know how to play against Dheli, there is many things I want to try out in a serious game against various dheli players with various tactics to throw at me.

but also against abbasid.

Chinese as well as players play chinese quite differently.
Some like ZN spam, others like BBQ rush, etc.

Whenever I see a english actually going for Abbey of the Kings, I almost shed a tear of happyness and kinda just want to give the guy a Free victory to encourage them to keep going early abbey of the kings and play English differently.

I agree that France is too strong. I can counter (as HRE) the early raids, but it will still slow down my economy, and I lose resources building towers (while the French knights can’t be taken down by them due to their heavy armour). Later they can easily control the map, prevent me from picking up relics, do heavy raids that will kill many villagers etc. Of course I might just be a bad player (ranked somewhere between Gold III and Platinum I), but while I kind of equally win/lose against other nations, against France I lose 8 out of 10 games (while having to battle them all the time, because so many play them; so I should be experienced). 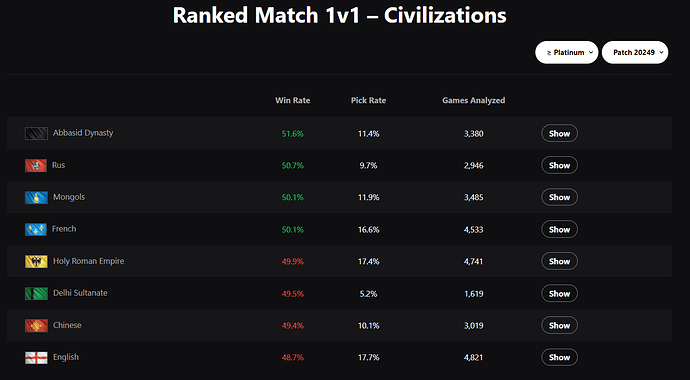 France may be easy on the macro side but it isn’t easy on the micro side. Imo it’s the only civ on AoE4 where you can really make a big difference early on with good micro control due to the power of knights combined with chivalry. It might also be the reason we see a new post about french early aggression pretty much every week. AoE4 and its playerbase seem to favour macro over micro and the French kind of break with that paradigm.

@PaloTay
According to this France has an overall win rate of 50.3 % and 49.5 % for gold tier so it certainly isn’t OP at the moment. It seems like you just haven’t figured out how to play against them yet.