The game crashes when I try to open any scenario file in the editor if that file has certain corpse objects placed somewhere on the map.

The specific corpse objects causing the problem are any that have the Trailing Unit ID #1252 according to AGE. Some examples are KONNIK_D, IVAYLO_D, Khan, Cuman Chief, and Tsar Konstantin.

I’m trying to add all of the corpse objects next to each respective unit in my map that shows all of the units & objects that are available in AoE2. This is the map I want to add them to: Modder Map - All Units and Objects in AoE2

Shoutout to @PsychoticSock1 and @duyhung2h for helping troubleshoot this problem.

Game shouldn’t crash by having corpse objects on the map.

Example of the update I’m trying to make for my Modder Map. I want to show each unit with its corresponding corpse right beneath it in organized rows. Most corpses don’t cause any problems I’m aware of, but the ones I mentioned above crash the game during the load screen when trying to open the file in the editor.

Here is a screenshot from AGE showing the list of corpse objects I’m aware of that cause the problem. 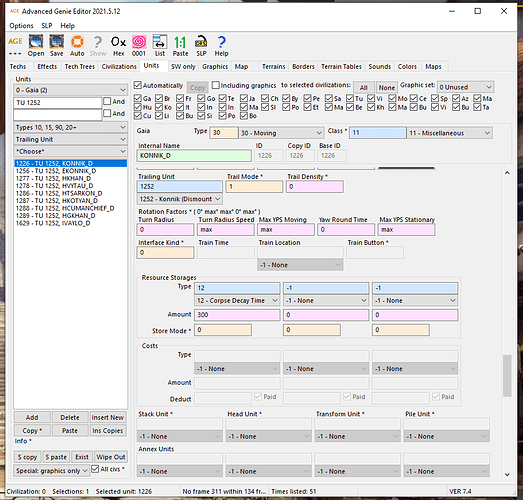 1 Like
Gaia-owned corpse objects decay instead of persisting like they used to
Bamboo and Baobab stumps (hidden objects) disappear after 3 minutes
CADiMaster March 22, 2022, 8:21pm 2

Just following up; I have several bug reports open at the moment.

Don’t think that’s the case; I unlocked them all in early February the same way and they persisted through the whole game. It seems to be an issue with the latest patch.

Thanks for this, we are now tracking this issue!