Game Crashing for All Players in Match (Very Frequently)

Hello! I would first like to say that my friends and I play lots of matches of AoE 4 multiplayer (hundreds) and unfortunately, we quite frequently experience crashes, usually where everyone in the game receives a No Result. Some times we receive a Defeat, but maybe about 50% of the time it gives us a No Result. Many times this happens in the loading screen, where one player’s loading bar will not load at all, and then we all have to Alt + F4 out of the game. Other times this will happen mid match, sometimes only a few seconds in, and sometimes after we’ve been playing for 45+ minutes. When the game crashes mid match, you will receive an error message, be able to view the Statistics screen, and then when you click Play Again it crashes your game.

This is very annoying. I, on behalf of all of the AoE 4 community, would like to politely request that these crash bugs be fixed before any balance changes are implemented. I would also like to note, that this issue is not related to my computer, as I just built a brand new PC from scratch, and as I said earlier in this post, I have many friends who also experience these crashes. Despite how much I really enjoy playing this game, it is already making me go back to playing other games. I will start taking screenshots of the crash error messages and posting them here. Anyone else who comments on this thread, I suggest you do the same. The devs need to become more aware of this issue before making any other changes to the game, in my opinion. I have attached my first screenshot of a crash error during a loading screen below. 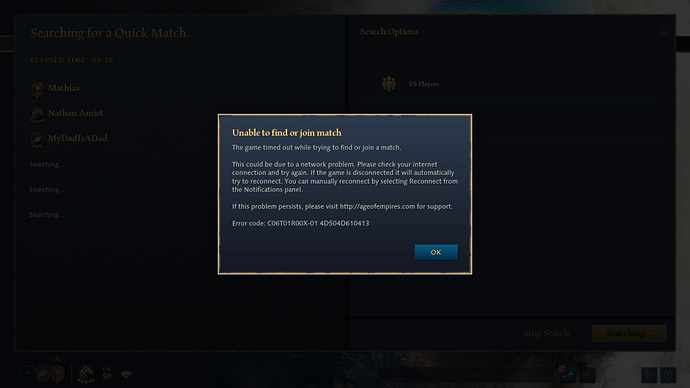 I’ve noticed that when 1 player ‘fails to load’ it’s actually that one player takes ‘a long time to load’. I used to alt-f4 when one player seems ‘stuck’ loading into a game but after realizing it’s just a slow load, I just wait. Never had anyone completely fail to load, only had some players take 3-5 mins to load. This in itself should be fixed. That’s a crazy long load time.

One issue I’ve encounted was players dropping in the first 30 seconds of a new match. I can’t say what the dropped player experiences on their side (maybe they didn’t like the civ match up or map generated and just alt-f4?). On myside I just see that X player is eliminated, which slowly leads to the rest of their team to also leaving the match forcing a requeue. If the players in the team affected don’t leave it just turns into an unbalanced match.

Hey @NathanAmiet! Sorry to hear you are experiencing this. Next time you and your friends experience a crash, please contact support here with your warnings.log file. It’ll help us get to the bottom of why you are seeing this.

Experiencing the same issue as stated above. I would say aroud 20% of the games cannot be finished because of this. Game is over for everyone, this is not a personal issue, it affects all players of the game.

Its caused by the chater aka game dropers btw.

I quit playing the game because of this. Haven’t played it since around the time of my initial post here.

You did well. Nobody from the hackers were baned yet and I meet them very frequently even among top100

Because they can only get higher and higher by doing this.

This game is clownfiesta for real.

Yesterday I met Commander Cao aka Admiral Cao (he renamed himself again) on live server.

I didnt know its him he was named Admiral Khan and I rushed wonder.

He started to bm me in the chat and then wrote in the chat … Am gonna make you cry in 3…2…1… and droped game for everybody.

So yeah … this guy is still on live server UNTOUCHED

same than xarda. Nice reaction of the reporting system.
I have the same exemple with double and triple ovoo exploit…