Game freezes with "AoE2DE.exe is not responding"

DESCRIBE THE ISSUE IN DETAIL (below). LIMIT TO ONE BUG PER THREAD.
In multiplayer, the game often freezes. I can move the cursor, and the music continues, but I cannot select anything or scroll. If I click, the screen turns white and I get a message that translates to “AoE2DE.exe is not responding”. This can happen after a few minutes, or an hour, or not at all.

I am not able to trigger it. It happens randomly after some time of multiplayer play. 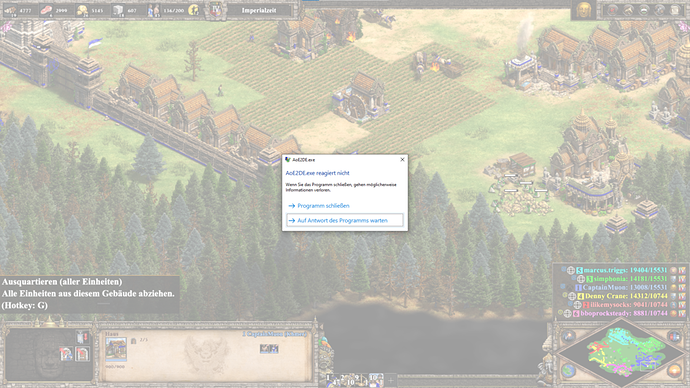 This also happened to me in a ranked game today, except I don’t get a popup saying the game is not responding, but the game just doesn’t respond to any keyboard/mouse input. Outrageous!

This never happened to me beofore, and I always use the same computer. Something’s wrong with the game. It freezes, and does not respond. I’m on a low-end, but that doesn’t change the fact that previously, the game did not freeze at all

Happened to me both in a campaign (Lords of the West), as well as in a custom match against the AI.