Game is a desaster, admit it please

The title is for real. I have been posting for 2 years the main problems we all knew we would have in the game and boom… all people who played the beta are complaining about the same problems previously mentioned with much anticipation…

Many people say devs care and read the posts on this forum, but that is not true, at least the care part, if they read they definitely don´t care, but wait don´t take it personal, I am saying this because like I said, there are dozens of posts talking about graphics, tactics, UI, proportions, etc and they did not change anything in 2 years of many posts pointing the same problems over and over.

So well, all I can say is the game is a disaster, and that makes me really sad because this could be the game changer of the RTS comeback! This had a lot of potential to become a hit and now we all know it will just be a regular game that some kids will buy to learn history with fun.

For one last time I suggest devs to please change the release date and start listening to the community and improve the game to have a success and not the failure we all know it will be. We can wait for next year, as long as you apply all our common suggestions to make the game that the community is expecting so far… That is my only suggestion.

I’m part of the community, and I think the game is great. Sure, it could use some improvements (for me, it’s mostly around missing unit selection features, and that every civ feels too similar because I’m an AoM player), but overall it’s pretty fun! Listen to that, devs!

I legit have no idea how this game is going to be received. It’s way too easy to let one’s biases seep into our eyeballs and assume many people agree with us.

That isn’t how you spell disaster btw.

Hey people dont take me bad, I really enjoyed the game. Thing is that they have not changed anything of all things that we have been pointing for the past 2 years. And they wont change them in 1 month, I am sorry but it is not going to end any good and that basically is because devs are not taking in consideration our recomendations.

Game is not disaster. Age of 2 fans dont accept devs choices and want age of 4 to be age of 2,

they changed ( only the most important stuff):
arrow sizes and somewhat flight path (they dont shoot through walls anymore
Zoom level, albeit very slightly
Graphics (of course the yupdated them from the alpha/Preview, but it was complained about and was made better, also of course not changed completely)

And I believe there was many more that was changed.

Some of these were bugs, others design decisions.

When I hear “this game is a disaster” what I think most people are really saying is “this game doesn’t meet my expectations” . That’s a valid opinion, but just because it is true for you does not make it true for every gamer.

Personally, I’m really looking forward to launch. AOE4 isn’t perfect, but it’s looking a lot better than many games are when they launch, and if they continue to work on it (as they say they will) I’m optimistic that it will improve over time - as all the other age games have. The vast majority of RTS gamers I know who tried it at least liked it, and many loved it.

The gameplay and the smoothness of its mechanics. I love the game.

Probably going to hit my favorite RTS games of all time list. It does so many things so right. And when I cant play it, I wish I could.

I wouldn’t use the word “disaster”, but rather “disappointment”, since I can totally see how it’s going to be just another decent RTS to lose most of its players in a few months and settle on 4 or 5000 concurrent players after (one of those 7/10 games), rather than an outstanding RTS to redefine the genre which is exactly how they advertise it (never going to achieve a 9 or 10/10).
But having in mind we are not talking about any RTS, but about a huge title like Age of Empires supposed to ressurect the whole genre and proove it’s still a thing and inspire other companies to invest into the genre again etc, yes I can see how you could force the word “disaster” there instead.

It hurts a lot, I know, we need to face the harsh reality now. I too have been anticipating this title for years and have been involved here for years trying to help with whatever I could to get it to that level, but it is absolutely not at that level.

The game has great potential.

Starting from Feudal Age, you’re free to choose between:

As you can see, I think most of the issues in the game can be eventually patched, such as the zooming.

As for the visual and sound effects (TC bells, color palette, etc.), this can be addressed by user mods, and even official packs by the developers.

In summary, I think the base game design has a lot of potential to shine. Most issues can be addressed with continuous support, as we have seen in Age 2

People are so interesting, they want the game to have a perfect balance, no bugs, a perfect interface and a solution to all problems already in version 1.0. The question is, why do we need patches then? Don’t you think it’s impossible to make the release version perfect? It is a matter of long-term work and constant support, you cannot immediately make the game perfect and without problems.

It would be a good argument if there were not so many bad reviews in comments everywhere and youtubers that are sharing their bad experience … basically the common issues we have been pointing out for the past years.

I understand you and your fanaticism and fanatic people that usually comment on these posts without arguments but offences or assumptions trying to defend their loved game. But nothing will change that the game is a disaster, it will not be the hit we all wanted and it’s nothing related to a game that did not meet my expectations, there are thousands of people that share the same concerns.

Unfortunately because of fanatic people like you and whoever were in the counsel, this game will miss a lot of things that whoever who worked developing video games know could be added to make it a hit and a masterpiece. Unfortunately, instead, we will have a mediocre game due to the fanaticism of others. Maybe someday you will understand this is not personal neither a fight nor a toxic comment hating the game, on the other hand, this game is very well done in terms of gameplay, matchmaking and stability, we are just calling out the mistake devs made by not listening the hundreds of fixes and adds we asked for the game to be a success. As a game developer I know what I am talking about and I pretty much know this game will be full of bad reviews, MS already noticed after the bunch of people cancelling the preorders after playing the beta…

The core actual players of the saga know what they want and can easily find this game has so many issues in pathfinding, art, UI, graphics and bad decisions that devs just made and never changed even when we already pointed out those problems so many times for about 2 years…

Exactly this! If they would release a perfect game then the game would NEVER be released because there is always something more to fix in that case which is why we have patches and expansion packs for even higher content updates etc.

I was completely blown away by this game, and it was only the beta. There’s so much to improve on, don’t get me wrong. I also had a poll on the AoE4 stress test beta that had only 15-25% of the people disliking or strongly disliking it. I have an outdated screenshot, it had 160 votes in the end: 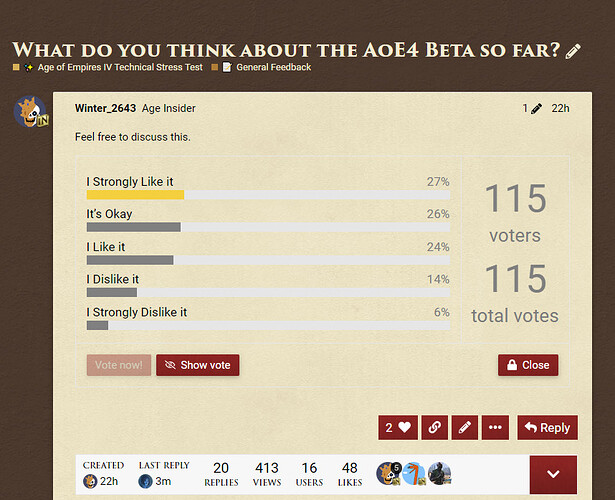 This entire topic is extremely subjective as well. It may be a disaster for your taste, but it isn’t for everyone. Instead of just saying how bad it is, say what they can improve on. As a game developer myself I am quite aware that constructive criticism is how people should go about these things. But that being said, Relic probably isn’t even reading this. Here’s to hoping.

I have to clarify this in most posts, but like I always say, I am not insulting you or saying you are wrong. You have your own opinion and it makes it just as valuable as everyone elses’.

I am not a fanatic. I played the game and I enjoyed it, despite some flaws (which I acknowledge). That’s my opinion. You don’t have to be a fanatic to enjoy something.

The fact that you believe anyone who disagrees with you is some crackpot fanatic says far more about you than it does about me.

As with all those threads here. If you don’t like it don’t buy it. Otherwise you might want to start offering valid feedback. All you did is crying a river in this post.

Another of those „I don’t like the Game“ threads…

Ain’t admiting nothing mate , game is great and fun just a few flaws but other then that the game is pretty good .

i think that you are just exagerating.

And the game is not a disaster , from what i have seen on youtube and reddit people likes the game.

and also you are just trying to reboot the boring topics that we had 4 months ago and the only “new” and real problem is the UI.

-tactics topic?? i dont know what is that.

So well, all I can say is the game is a disaster

But why do you sound like you are now an IGN game reviewer??, that is just your opinion! let the ones that likes the game enjoy the game!

For one last time I suggest devs to please change the release date and start listening to the community and improve the game to have a success and not the failure we all know it will be.

Excuse ME? failure that we all know it will be? , Hmm dont sure about it. Seeing that in twitch the day one and day 2 of the open beta aoe4 had 60k viewers says maybe to much. I dont know if this game is gonna fail. i really hope that it doesnt fails just because you say so.

Another thing, Why delay the game? That would kill all the hype generated by the open beta and players would be starting to lose interest on the game , that would be a 100% failure that now we all know that it will be.