To cut right to the point trenches! i’ve always loved the battles in AOE 3 but for some reason i just have this itch for the ability to create trences it could be used in both an attack and defensive sceanarios and would add a awhole new perspective to the game i understand this is a reach and a half but overall historically was a big thing when it came to warfare!

No given that i understand horses are a thing within this game so like an if (Big if’s) this was a thing maybe you could set a radius on how big and far apart said treneches need to be! length wise, and when cannons fire at trenches they do full/sometimes half damage

I could just imagine the stalemate battles in the middle of the map where it’s a fight to controll not only the middle but your appointments 3 trenches they made (Obviously set a limit) say to like 5 so you have to be very strategical.

I know the likely hood of this happeing currently is next to slim but lets say in the future in a new game?

(Would also like to note) Make it a function you could turn on or off! that way it doesn’t distrub people if they hate the function

Not really a WW1 game though.

Before DE I would not consider this as possible.
But as DE already added several charge abilities, maybe they will implement an “entrench” ability at some time XD.

That’s honestly what sparked my intrest! i understand on like current platforms it would of been such work, why i went on the express " in the future " if such an option was to exist i think it would bring a awhole new level of gameplay (For-granted this is just my outlook)

Don’t be pedantic, obviously they existed before but trench warfare is heavily associated with WW1.

trenches where used through most of the periode but almost exclusively in siege environment where you are trying to create pathways up to the enemy walls and protect your soldiers from defenders on the wall for as long as you can.

on actual field battles trenches where a lot rarer until late in the periode, the reasons are simply:

guns have a high reload time and short accurate range, realistically you wont get more than 2 shoots off before an enemy formation can charge you, that means that spreading your soldiers thin in a trench line will actually leave them more exposed since an enemy packed formation can easily overwhelm them with numbers even if they have a few shoots of advantage.

Couldn’t agree more that’s why i mentioned it’s used for attack and defensive sceanarios again it’s nothing special just a concept to switch up the standard battles you have on AOE! I don’t want it to be a strong!

I hands down think in AOE 3 it in particular wouldn’t work like you said “realistically you wont get more than 2 shoots off before an enemy formation can charge you” But in a game like AOE4 where the armies are stretched and smaller i think it has some real potential to just spice the game up! of course it won’t be a go to method just a fun thing to add (If that’s a fair call)

“obviously they existed before” is literally my point
I don’t care if trenches were heavily associated with WW1 they were still used centuries beforehand in warfare… with the sieging and defense of fortifications, i can’t express this enough it’s a trench not a plane or machine gun (ww1)

If you don’t like the idea i get that, but sperging out just didn’t make sense to me… For instance ( [Jonasnee8581) had a solid point to which i was able to futher explain and expand on the idea you (It isn’t ww1 << Well no ■■■■) lol…

Trenches don’t fit the game, it’s simple.
Trench warfare belongs in a game based on the world wars, it was only used prior to that for sieging and considering this games version of sieging is walk up to a stone wall and throw a torch at it I don’t see how a trench would ever fit.

True that in most cases they were dug during the investment of a fortress to protect from cannon fire. However, they were used on the battlefield in some cases. Two earlier examples of this were the Battle of the Golden Spurs and the Battle of Dara. For those examples, the trenches were used to protect from and redirect cavalry and not really in the same way as the world wars. 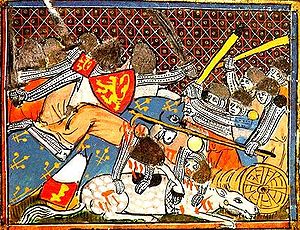 Battle of the Golden Spurs 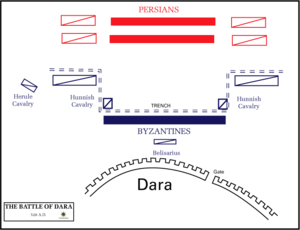 Lazic War The Battle of Dara was fought between the Byzantine (Eastern Roman) Empire and the Sasanians in 530. It was one of the battles of the Iberian War. Procopius's account of this engagement is among the most detailed descriptions of a late Roman battle. The Byzantine Empire was at war with the Sassanids from 527, supposedly because Kavadh I had tried to force the Iberians to become Zoroastrians. The Iberian king fled from Kavadh, but Kavadh tried to make peace with the Byzantines, and at...

That being said, during AoE3’s timeframe, I think redoubts were the most common battlefield construction other than in sieges. A redoubt (historically redout) is a fort or fort system usually consisting of an enclosed defensive emplacement outside a larger fort, usually relying on earthworks, although some are constructed of stone or brick. It is meant to protect soldiers outside the main defensive line and can be a permanent structure or a hastily constructed temporary fortification. The word means "a place of retreat". Redoubts were a component of the military strategies of most European empires during the The advent ...

I would welcome an earthworks style fortification. The tall stone walls were always kind of silly to me, same with the tall forts.

Of course,in fact digging trenches would wait for a future aoe 5 set in the twentieth century,considering that Relic has similar things in his CoH saga with sandbags and anti-tank mines…

Yes in fact during the period of aoe 3 there were large-scale battles (from Pavia to Waterloo and from the Thirty Years’ War to the Napoleonic Wars)…only in the mid-nineteenth century with the invention of the machine gun and large artillery cannons,the war began to change (first in regional scenarios such as the American Civil War,the war of The Triple Alliance in South America and the Franco-Prussian,Sino-Japanese and Japanese Russo-Japanese wars) to finally deploy everything all its deadly deployment in the First World War…

Of course,at least for these games let’s ignore the issue of making trenches…