Hello. I seem to have a problem in that some of my games don’t register when they are finished. For instance, about a week ago I played a ranked 1v1 and I didn’t get any elo for it despite winning. My opponent lost points, however, and it got registered on the ageofempires stat page (https://www.ageofempires.com/stats/match-details/?gameId=0d99ba39-8bf1-416f-ae51-59906dbf252b&game=age2). Note how there is only one player registered for this particular match. Game was won by opponent resigning. My game didn’t crash nor did I (afaik at least) disconnect from the servers. This have happened three times recently and I’ve never experienced it before the most recent patch. Only seems to affect the 1v1 RM ladder, not yet had any issues with DM 1v1 or RM TG.

Is this a known issue and is there anything I can do about it?

As far as we know, it is not exactly that you didn’t gained any elo, but rather that this gain will only be shown at the future, despite being there hidden on your statistic anyways.

About the official stats page: it is still in beta and have tons of innacuracies and some bugs, it is not very reliable. I think that aoe2.net is a better site to keep record of your elo and match history.

I’ve experienced some delays before, but usually it gets sorted within a few hours. The example I provided took place 6 days ago. My ELO hasn’t changed and on aoe2.net it says my last game was played 9 days ago. In reality, I’ve played two games since then.

Oh, i see now. This is rather strange, ideed. I can only suggest you getting as many detail as possible and creating a topic at #age-of-empires-ii:aoe2-de-bugs. This is very concerning if it proves to stay consistent with your profile.

Same here - i’m new to the game, so my stats are pretty clear.
i did 9 multiplayergames at all. All ranked 1vs1 as far as I know. (never joined a lobby - is it possible to play unranked by accident?^^) 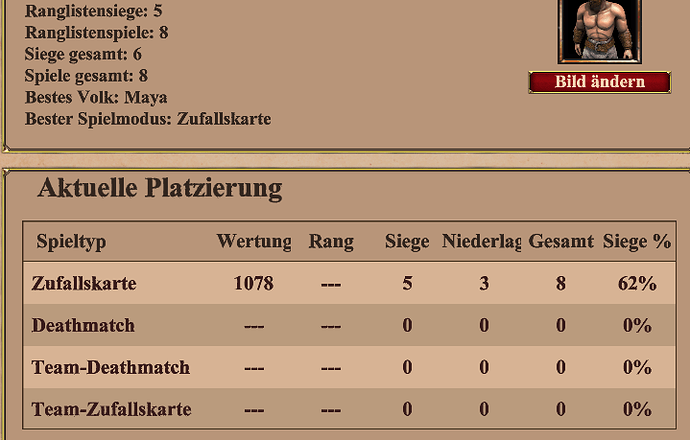 Not sure if the screenshot works, so:
My stats say:
Ranked wins: 5
Ranked games: 8
Wins at all: 6
Games at all: 8
Current Placements
Random Map: Wins 5, Loss 3
Everything else zero

It should be 6 out of 9 ranked. Even if i get something wrong: it is totally impossible to get 6 wins (at all) and 3 ranked losses out of 8 games at all.

I got replays of 9 games. The losses were caused by losing connection to multiplayer, but i fixed it with changing ethernet settings (ty for the user who posted the guide.), but the missing game was finished correctly. I dont think, that there is a connection between both issues.