Today I have the GTX 980 Ti graphics card.

Does anybody know if it would make a lot of difference to upgrade to the RTX 3060 Ti card? Has someone actually done the comparison on this exact game, AOE4 … running fullblown 4k with everything maxed out ( shading, details etc … )

Really interested to see if it would benefit me at all … the GTX 980 Ti ( 6 years old ) gets very load in certain scenarios, e.g. in 4 vs 4 battles but other than that it seems to be pretty smooth

Let me know your thoughts, specially if you’ve done the comparison your self. 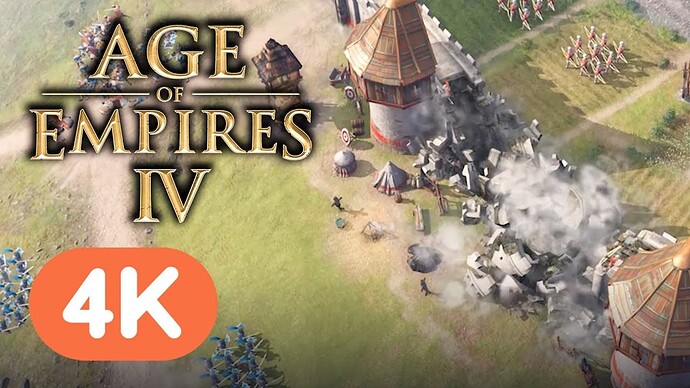 AoE4 seems pretty unoptimized and mostly cpu bound. Throwing a RTX TI at it feels like getting a gigbit line to a server with 56kb upload.

You can see my results on this thread, it works like charm running fullblown 4k, all settings maxed out

Hello, I’ll tell you a little about how the thing works about what hardware (especially GPU) you require to run this game, to begin with, do you want to run it with maximum graphics?

Because speaking of 4K with maximum graphics, a 3060 Ti will not be enough, especially because this game is pure rasterization (brute force) without the support of technologies like DLSS. While 3060 Ti is a very powerful GPU this game has a big problem of which seems to be the Engine that today is not solved. And is that the load of the GPU doubles when you drag the camera by the map or focus it on water areas, basically if to have 60 fps stable your GPU needs to be able to give in this game up to 110-120 fps in the most demanding areas such as water, In other words, for your 60 fps to be safe you need to have the 40-50% Load GPU all the time with the static camera. I have a 3070 Ti and the most demanding mission as is that of Retake Normandy or the final mission of Mongolian campaign reached 60 fps dragging the camera in the most demanding areas with a load of 90% AVG GPU, all this in 1920x1080 graphics in maximum. So imagine a 3060 Ti as it would hurt in basically a 4K resolution.

3060 Ti would be perfect for mid-high graphics at 1920x1080, and maybe if you play pure skirmishes you can play at ultra, as campaign missions are the most GPU demanding. Maybe in water maps if you have to lower a few things to medium, or maybe you can reach 60 fps with the GPU at 99%

Definitely if this game had DLSS with 3060Ti maybe if you could bring to 60 fps stable in medium-high 4K with performance quality, but the game does not have this, would have to demand more developers to put these new technologies in AoE IV, because rasterized is already a thing of the past, useless, obsolete, and most importantly inefficient.

Forgive me if I’m a little hard, but I do it thinking about you and your pocket, since surely you would be very frustrated if you see that your investment to which you had to dedicate hours of work does not work as expected.

You can read my answer in my post, it works perfectly