From the videos and screenshots I tired to make a list of generic units and what I think they might be good at.
It was confirmed in interviews that there are shared generic units between the civilisations that just have unique skins.

Either of them could potentially be a “trash” /Food/Wood) unit.
I think other Infantry like the Chinese Guandao are unique units.

I don’t know if Heavy Sword Cavalry is a generic unit or a Lacer after charge.
No camels to be seen so far. Might be unique to the middle east.

I don’t know if I missed some units that seem to be available to most or all civilisations.
I didn’t include siege weapons.

some other units I have seen

Where are the skirmishers?

Where are the skirmishers?

No Skirmishers apparently. I think that’s a good decision they are more a unit of ancient times than the Middle Ages.

I noticed in one trailer you can see the stats of an Crossbowman and it’s described as a anti armour unit.
You can also see the armour class “Light” and “Heavy” on units.

Maybe a part of the counter system is build around this armour system.
I assume that normal Archers will be good against light armour.
Elephants are surprisingly Light armour class (at last War Elephants maybe the Tower Elephants are Heavy).

I assume that Swordman and definitely Knights (Heavy Cavalry) are Heavy Armour class.
Maybe Swordman counter Archers but are countered by Crossbows.
Archers counter Crossbows though because Crossbows have Light Armour and so do Archers.

I like that they seem to try something new and don’t keep the Melee plus Piercing (Ranged in AoE3) armour system.

that would make sense… also why in screen shots we see archers and crossbowmen in the same sequence. But I hope crossbowmen are not countering Cav, as if its that simple a countering system then archers and cross bow would counter most things… we can see archers set up spikes for an anti cav defense too. Elephants say they counter everything so might make up for weaker siege units, and essentially be a melee siege unit as far as DPs vs hp is related.

Very few battles were actually won through archers. I hope they are a weak but supplemental way to fight. plate armor is pretty resilient vs them, even pretty close range.

If every unit is either Light or Heavy armour and Archers counter Light while Crossbows counter Heavy than a combination of both would counter everything.

Knights sill have the charge ability so they will likely counter any ranged unit on the open field.

we can see archers set up spikes for an anti cav defense too.

Only English Longbows can do that.

There are a lot of unknown factors.

Maybe Archers, Spearman and Spear Cavalry are the “trash” or counter units in AoE4. Maybe not.
Many questions that we can’t answer yet.

but spearmen countering ranged would be odd, since they are a 2 handed unit and swordsmen have a shield.
I have seen a 2 handed swordsman I think too. and a axeman, so counters will be interesting!

I haven’t seen a two handed swordman, but maybe I just missed it.

The icon for Swordman is a sword and an Axe so we can assume that at last one of the 4 missing civilisations will have Axes instead of Swords. My theory is that the Axe man we saw are the Rus version of the Man At Arms.

Did I write that the Spearman counters ranged units?
I just wonder if they counter or are countered by Swordman. One scene in the Gameplay trailer shows Swordman killing Spearman in the Dark Age but maybe the Villager support or the buff from the Bell are the reason they won.

oops, maybe I misread that, its really late for me.

If you look at the UI info when crossbows are selected you can see that they are designated as ‘anti-armor’ units. So presumably this is their primary difference with bowmen, and the two units will fill two distinct roles in the same army.

I made this potential counter system 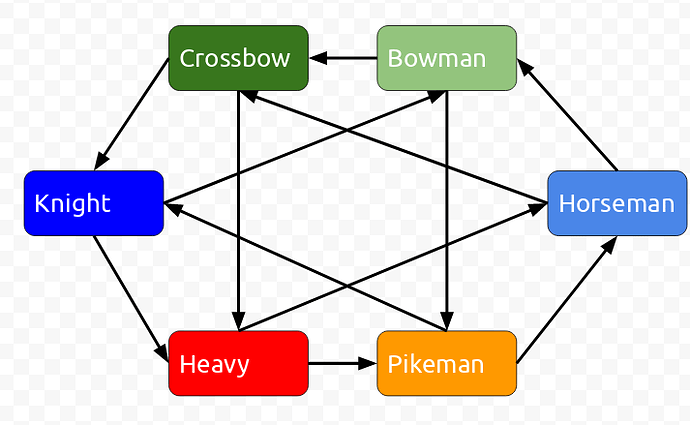 The 3 units on the Right are Feudal Age, the 3 on the left are Castle Age.
The English have early Heavy Infantry and the Mongols have early Knights.
Maybe some other civilisation like China or the French will have early Crossbows.

I hope generic units are sometimes different in name and stats like in aoe3. For example the brits have the basic musketeer like most european civs but the japanese the ashigaru musketeer which is a bit more expensive but also faster, has more hp and damage. Does anyone know if this is the case in aoe4, or they will be all the same? I would really like it if they were different sometimes.

We only know that the Longbow is a better version of the Archer.
This will likely apply to some of the other unique units too.
We also don’t know if civilisations have bonuses or unique technologies that improve generic units.

We know that the “Cannon” is a unique unit of the French that replaces the Bombard. Unlike the Bombard it doesn’t have to be packed and unpacked.
We saw the Cannon being used by the Delhi and the English in the Fan Preview so that’s something that changed in the last two months.

We saw the Tebuchet as Imperial Age unit as a Imperial Age unit for the Mongols in the Fan Preview but maybe its Castle Age for others.
Also there was some unknown Castle Age siege unit that could be a Scorpion/Ballista kinda unit.
The Nest of Bees seems to be the unique Chinese Version of this unit but we can’t now for sure.