The discription of the Card Hire French Fusiliers is not stating the shipping of extra Fusiliers.

As a little side note, i think Mercenary Army Shipments in the original game did get affected by Wallenstein Contracts (Advances Church). Now they can be shipped indefinetly but not for free (the use of Wallenstein Contracts is greatly reduced - it’s still 4000 Gold if i rember correctly)

A lot of the other Civs can get a Politican in Age 3 which allows them to hire 2 different mercs in the saloon but the Germans as once the best Merc-Civ (now decrowned by the swedes) don’t get this option.

They really messed with the Germans huh. Mercs were a foundation of that civ which made them unique. Now Swedes can train German mercs but the Germans can’t.

I hope this is fixed.

Wallenstein’s contracts are just worse than they already were.

In fact Mercenaries were the differential of this civilization and now it is not. I am disappointed with that. 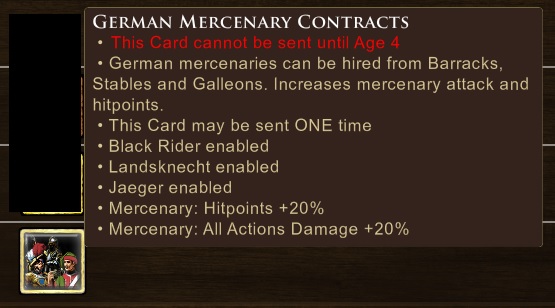 i dont know whats the difference, since we have the same Build, Platform and OS, but for me the Mercs are free after Wallenstein Contracts. But i totaly agree, that germany needs improvement concerning mercenaries