Glitching / Hacking, Yes it is a thing boys

After some testing in singleplayer i mannaged to replicate this bug, I also managed to research all ages for free.

I am stopping all online play until this is fixed!

also why has my message where i posted the replay of the game i lost beiing flagged as inappropriate by “the comunity”?

why has my message where i posted the replay of the game i lost beiing flagged as inappropriate by “the comunity”?

Just message a mod and ask them to unflag it.
Someone might have made a mistake or was trolling

also why has my message where i posted the replay of the game i lost beiing flagged as inappropriate by “the comunity”?

Probably because it is against the community rules to calling out people. I dont really care, but others probably do and thus flag your post.

I think that was the reasonable thing to do at the beginning as some players could have taken advantage of it (the devs also answered rapidly meaning they are active here) but the 2nd following answer should have been more coincise and steady. What i believe is acceptable:

edit: as I get to know it is the publisher that decides when the patch is released so devs seems to not have anything related to it.

This is what one of the original dev wrote

Being the developer — not the publisher — of AoE , we don’t have the final decision if or when a patch is to be released. As a result, all during 1999 our reputation as developers was assaulted by fans who saw us as uncaring about the problems that were driving people away from online play of our games.

I don’t know how valid it is today in the gaming industry but i think these things don’t change.

One of biggest things we often do that makes it easier for a hacker, and thus harder on us, is include Easter eggs and cheat codes in the single-player portion of our games. Considered to be practically a requirement, they expose extralegal capabilities of our game engines and make it much easier for the hackers to locate the data and code that controls that functionality.

Where did they reply? private whatsapp group?

Same situation. I just feel it is a waste of time. The only thing that can be done is playing with friends in unranked.

I just played a match with someone that was cheating. Apparently the player was able to allocate free resources, make instant buildings and upgrades. I have the replay of course, but I can not attach it here apparently. But I already reported the player. This is getting frustrating.

I just played a match with someone that was cheating. Apparently the player was able to allocate free resources, make instant buildings and upgrades. I have the replay of course, but I can not attach it here apparently. But I already reported the player. This is getting frustrating.

Report buttons are in several locations in game such in chat, the lobby browser, in-game, and the post-game. Each report includes check boxes to select the reason and an area to include any additional information. These reports are reviewed by a moderator before any action is taken.

Actions are taken based on the Microsoft, and Xbox policies. If you have any questions about what is considered acceptable (and unacceptable) behavior reference these policies.

If the report needs more information than can be provided in game, then send an email to aoesupport@microsoft.com. Please include your Xbox gamertag or Steam ID along with additional details about the issue.

Why did I get banned in game?

Bans can happen based on multiple reasons such as inappropriate content, griefing, cheating, inactivity or verbal abuse. Each report is currently being reviewed by a moderator before action is taken. Any action will be based on the Microsoft, and Xbox policies. If you have any questions about what is considered acceptable (and unacceptable) behavior reference these policies.

If an account is banned, then a countdown of the ban duration will be shown on the main menu screen. The length of ban can depend on the type of report, severity of issue and previous history of bans on the account.

Please email any questions about a ban to aoesupport@microsoft.com along with your Xbox gamertag or Steam ID.

I would say: Just send a mail again. If more players complain about this by the devs, the more prio it will get (hopefully).

Current state of MP is just bad. Current patch ruined everything. Since these hacks/glitches are more wide spread, i just stopped playing this game.

This is a joke, there are players being reported for weeks and nothing happen.

I’ve posted this in another thread but I think this one is more appropriate:

I’ve played a ranked BF 4v4 game where one of our opponents had a +4/+6 armor on his Elite Skirmishers as Saracens. Their team mates were Teutons, Lithuanians and Khmer, and none of them could provide such a team bonus.

I didn’t notice that while playing because I was fighting with my flank partner at the other side of the map (I was the green one, as shown in the screenshot below), but seeing the replay I just noticed that extra armor coming out of nowhere. Good thing we won anyways 11

See the proof below: 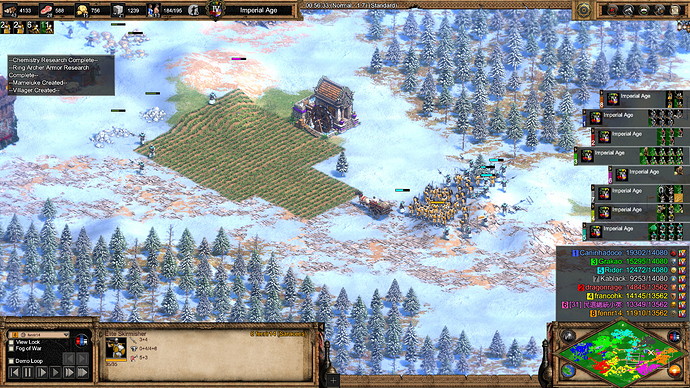 While watching the replay again to post the screenshot above, I just noticed he did research Ring Archer Armor twice (resulting in 10 pierce armor for his skirmishers), so not sure if it is just a bug or an exploit.

Again, this happened in a Ranked Match, not a random custom game with shenanigans.

This has always been possible, even during Voobly days with anti-cheat. The difference is this is a clearly implemented bug by the devs with no hotfix or even any comminucation/acknowledgement. This is a scary moment for our game- I fear MS might be looking towards AoE4 rather than finding real solutions for this game.

This is a bug, not an exploit.

But I agree that the devs should fix this asap

(not really. its probably because they dont like gameplay being shared and stuff)

Where did they respond?

Where did they reply? private whatsapp group?

Read my reply again carefully. I posted a link to reply by community manager.

GMEvangelos was speaking for the dev team in that thread, and Yorok0 just quoted him in the post you responded to:
"This is accurate. it is being tracked and has a fix in the works! Thanks to everyone reporting the issue and including information to keep us in the know! "

it has a fix in the works as the malay bug?

It is probably all related to the same issue with the introduction for some stupid cheat code.

The REASONS for appearing many Cheaters are all these MODS of Aoe 2 DE and month changes, updates.…
Some Hackers make Mods, full with bugs to be used at some Tournament with Prize money.
So the makers of the mods will have ADVANTAGE at these Tournaments…

Microsoft must STOP the month updates and allow mods only for Single player, or UNRATED games.

Do i really need to play with big trees?

Microsoft must STOP the month updates and allow mods only for Single player, or UNRATED games.

It’s only a cheat code.

Stopping the monthly updates? No, just no