EDIT: I was going to post references to various evolutions and discoveries in ergonomics of the grid system, but there is a limit of 2 links per post on new accounts, so you guys can use Google if you’re at all curious - sorry. Look up a user named WTVR for the first implementation of a grid hotkey system in WC3 and Team Liquid forum for discussions which improved the formula further.

EDIT 2: Limit of 2 links per post is actually a limit of 1 link. Ayyy…

I’ve just picked up AOE4 as my first AOE game in the franchise, and I’ve been trying to adopt the hotkey layout that I am used to from other RTS games. I’ve got something that is working alright now, but overall the experience has been pretty jank. It’s more or less impossible to set up a hotkey layout to reduce finger repetition, because the grid layout is designed to be visually clean rather than mechanically efficient.

For an example of some research into hotkey ergonomics, search for TheCore and Chameleon layouts on the Team Liquid forums.

If players must use a grid layout, can we perhaps reorder the command card buttons for each unit? This was possible in WarCraft 3 through editing text files. I’m thinking that this custom script from 2007 was the inspiration for the default hotkey layout in AOE4, but that layout doesn’t make efficient use of hotkey groups or camera hotkeys (I noticed there are none in AOE4?). Stacking abilities in a horizontal line is a convention that mostly draws from MOBA, but is considerably less efficient in RTS games as it increases the likeliness that a player must use a finger to pick a unit group or camera, then repeat that finger on a nearby key to use an ability, limiting their action speed or putting undue strain on one part of the hand when playing quickly.

Having the QWER keys open build menus is particularly egregious, as it introduces extra key repetition as the most commonly build structures are also on the QWER row. This starkly defies good ergonomic design as it elevates the importance of visual position of those structures on the command card over a natural key press, such as Build Outpost sharing the same key as Attack, since they logically both cause hurt to the enemy. Currently, houses will be the slowest structure for a speedy player to build on account of the Q repetition. It’s also unhelpful that the key to return from the build submenu is Esc which requires the player to transpose their hand to reach, unable to be rebound to something else.

A tactic used in SC2 to avoid finger repetition in build menus is to bind “Build Basic” to two keys, then “plink” or “piano” the keys in order to drop a structure quickly. For example, if Q and W are both bound to “Build Basic”, then W > Q and Q > W are quicker to execute than Q > Q or W > W for the “W” or “Q” structures respectively.

Here is my current hotkey setup, adapting my index finger to Attack and leaving room for unit groups where my hand naturally sits. Imgur: The magic of the Internet

Either way, the grid layout featured in AOE4 was developed around 2007/2008 by WarCraft 3 players looking to pool all the units’ commands to one side of the keyboard, ~2 years before StarCraft 2 was announced in October 2009 and more modern improvements to closely-positioned key binds have been employed by high-level players since then. AOE4 doesn’t currently benefit players wanting to adjust their key bind system for blended use of unit groups, abilities, etc. which is going to have a long-term impact on it’s reception as a competitive game, if trying to appeal to players from other franchises. It feels like a minimal implementation, as if to test a prototype.

As I said, there is more that could be said, but I think my post gets across the worst of it.

Thanks for reading; I’m aspiring to be a real Mongoloid in AOE4.

Replying to post an example layout from StarCraft 2 and players using it or something similar (everyone modifies keys to their liking):

Dark blue keys are globals, cyan are unit groups, red are abilities and green are cameras. 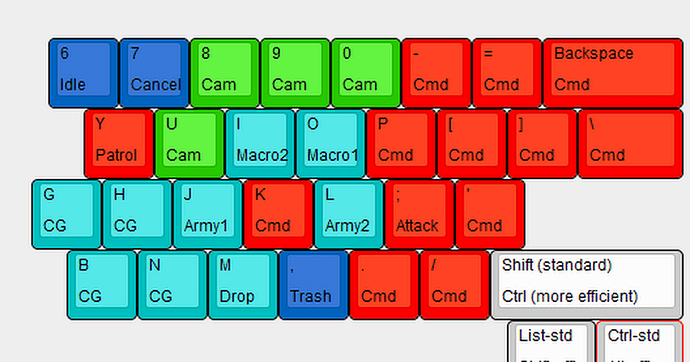 Google if you want to know more - forum has a link limit per post.