Haze/Tint applied to most maps?

It seems like there’s a haze and/or color tint applied to most maps. Is there a way to disable this?

I played a couple maps in a row that both had a semi-transparent blue haze filter applied across it. Almost felt like a light smoke covered the land. I even zoomed in just to make sure it wasn’t a haze or clouds from being zoomed out so far. 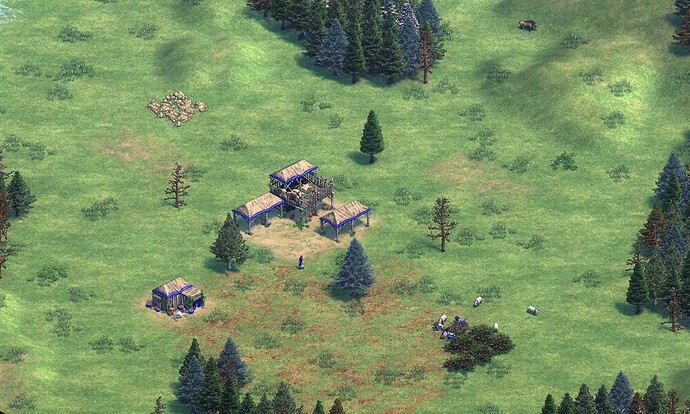 I then opened 10 other AoE2:DE maps and all or nearly all had different filters… yellowish on some, greenish on some, blueish on some, for example.

It leads to color-tinted shadows as well, which adds to the tinted vibe that I wish I could disable a lot of times.

I also wish the shadows were darker, more contrasted, and sharper like AoE2:HD. In AoE2:DE, their fuzziness and lack of contrast makes the overall game look less sharp than I feel it should.

Sometimes I just miss having the sharper look AoE2:HD had. And miss having greens that are actually green rather than greenish blue, and blue water that is just blue, etc.

EDIT: I found a map that was pretty green in DE, but, see, even the shadows have the green filter applied… so its ‘theme’ is overwhelmingly green:

I believe you can disable that in graphic options, map lighting for example.

Yes, it’s one of the six color moods that is being seen: Night, Autumn, Desert, Winter, Jungle, and None. It’s good for scenarios and I kind of like it, but I can understand why the OP might want it turned off.

Oh, very cool! Thank you. I did a quick test of that, and I think that helps! I’ll do more tests some other day

I also turned off Bloom and Fog animations, which may be beneficial in this endeavor.

I already had Sharpness cranked all the way up as high as possible, which is nice (more like AoE2:HD), and I will keep it like this.

Yes, it’s one of the six color moods that is being seen: Night, Autumn, Desert, Winter, Jungle, and None. It’s good for scenarios and I kind of like it, but I can understand why the OP might want it turned off.

When DE first came out, I did enjoy the mood lighting, but it’s just a little much now for me. Maybe the effect just over-stayed its welcome with me and it’s time to try more normal lighting for a while.

I think the shadows do become more black when you disable Map Lighting, but, of course, they’re still a little blurrier than ideal for me. Hopefully they can be more precise or sharp someday

Thanks for the info! It’s great info to know there are six color moods, I was actually curious about that

Do you have the Ultra high graphics free DLC? If you don’t and your computer can support it you could try that. I don’t have it, but it might help sharpen stuff even more for you, or improve the shadows.

No, sadly I don’t have a 4K/UHD monitor. I remember a dev stating or implying on the forum early on that if you have a 1080p monitor, you wouldn’t want to use the UHD texture pack

blue water that is just blue

You can also disable 3D water effects and beach waves in the graphics options, which will make the water look more like it did in the original game. (Although perhaps that’s not what you mean, since HD also had water reflections.)

As for the tree shadows, they were actually even sharper in the original Age of Kings…

Awesome, thanks! I think for the most part, or fully, I enjoy DE’s water better

Now that I know I can disable Map Lighting, I think I’ll probably start seeing truer blue waters but with some neat effects in it

But I’ll definitely be try disabling the 3D water on occasion, if/when I want a more simplistic water

I still think it’d be neat for AoE2:DE to have a button you could press to toggle back and forth between old school AoE2:HD graphics and new AoE2:DE. However, I bet that wouldn’t be too easy… they’d probably have to artistically recreate every new DE asset in the old HD style

As for shadows, wow, didn’t know they were even sharper in AoK! I understand DE devs’ desire for ‘soft shadows’ since it’s all the rage these days, but I think they went a little overkill. Looks like a big blur/smudge tool was applied to them all, rather than it being distance-from-object-to-ground related

Instead of the blurry ones in DE... 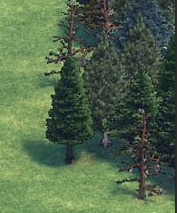 * - I’m aware the DE screenshots have Map Lighting filter enabled. If off, they’d be darker, which is good. But they would still have fuzzy/blurry edges

As for shadows, wow, didn’t know they were even sharper in AoK!
…

Here’s the same tree in the original AoK. The HD shadows are more realistic, to be honest, but I think the AoK ones fit better with the art style. I never really liked the look of HD – not totally sure why, but I think those shadows were part of it…

Wow, that’s awesome! I would love it if the options screen let us choose how sharp or soft we want our shadows. AoK on one end of spectrum, DE on other end, and various points in-between.

If shadows are soft just to cater to slower PCs, then at least give us the option. Not all PCs are slow

Wow, that’s awesome! I would love it if the options screen let us choose how sharp or soft we want our shadows. AoK on one end of spectrum, DE on other end, and various points in-between.

This would be potentially doable with a mod, if you have the time and inclination.

I’m not sure how that would look – the tree graphics are not that similar in most cases. HD reused most of the AoK graphics in some form, but pretty much everything was remade for DE.

If shadows are soft just to cater to slower PCs, then at least give us the option. Not all PCs are slow

It can’t be to do with slower PCs – a “slow” PC nowadays is way faster than even the fastest PC from 1999, and AoK didn’t require a particularly fast PC even then.

It’s not like they cannot change default settings, it would be the smallest change to greatly benefit visual clarity. They refuse and let everyone who buys the game figure out on their own how to make it look suitable for competitive play.

GFX settings like; Map lighting, bloom, vignette, depth of field, animate fog, animate fog border and readabillity panels only clutter the screen. Sharpen makes for harsh textures (roofs) so I leave it off for a more pleasant look.

Adam Isgreen asked for the accelerated drag scroll to be defaulted, perhaps in similar fashion this is some higher up who hasn’t played a competitive game in the past 20 years making these decisions. This is the most optimistic view in defense of the devs, if it’s actually just FE who decide this then what to say.

If they could re render those soft shadows it would make a nice difference.

I agree classic mode should be part of DE (definitive edition), even if this means compromising and keeping the units from DE. This is probably too much work given how badly MS underfunds this project.

This would be potentially doable with a mod, if you have the time and inclination.

I don’t really have the energy or inclination

And if they ever change trees, add trees, animate them differently, etc. Or mod may just break in a new patch. I may be on the hook to try and fix all that. No thanks!

It can’t be to do with slower PCs – a “slow” PC nowadays is way faster than even the fastest PC from 1999,

It might be, though, because DE has a lot more effects, graphical detail, and other stuff going on than yesteryear. Plus, the pop cap is no longer 200 or whatever it used to be. And last I heard DE still only uses one CPU core, sadly

Yeah, maybe when you first install/launch the game, it could also show a sample gameplay footage screen, like an initial setup screen, with the graphics sliders/toggles next to it; letting us customize or set it up however we wish from the start, showing a real-time view of our choices. If nothing else, it would make many people aware of all the visual adjustments you can do.

But then also have that visual fine-tuner accessible at any time we want thereafter. Seeing real-time feedback of your changes would save a bunch of time from having to go back and forth between the menu and the game to see what every little thing is doing, and help us hone-in on the look we want as individuals. This would also be particularly helpful for fine-tuning things like the opacity/color for terrain grid and tower range, for example.

But for two years I didn’t know I could make DE look so close to HD. A visual setup screen would’ve helped me realize this sooner. I know people who stopped playing DE because the visuals turned them off, as they preferred HD. I showed them how to make it look more like HD, and now they’re back to DE.