Also, I see that for both of them, the frame delay was only 10 before Definitve Edition. Doesn’t that make hit-and-run tactics impossible? I don’t mean shooting down villagers and escaping, I mean tearing down approaching Pikemen. With such a high delay between moving and firing, that tactic is out of the question.

it is indeed poop sir

Its something weird about the animation. They end up firing at the same speed I think

not quite but im assuming thats what they wanted.

Keep in mind that the frame delay stat is higher because in DE all unit animations have more frames compared to older versions, so the increase is a way to keep the true “Time Delay” the same. Actually, in DE the Time Delay of Cavalry Archers is lower than in other versions. This is because the frame delay stat only indicates how many frames are counted before the attack happens, but this stat alone cannot tell you how this translates into actual game time. For that, you also need to know the Graphic Time Duration (a hidden stat independent from the unit itself, but associated with a particular graphic set for an unit). If you know both values, you can know the actual Time Delay, which by all means and purposes is what actually matters in the discussion, calculated as the Graphic Time Duration divided by the Number of Frames of that graphic in a particular direction times the Frame Delay.

All of this to say that:

Hopefully this is a good explanation.

Give this man a medal.
Once again, science has come to answer our burning questions and set our minds at ease. Love it.

Wow! Thanks a lot! It’s an excellent explanation.

we’d actually need the numbers for CA and HCA from AOC to know. can someone look up the number of frames and how many seconds does the animation last. with those numbers we can tell.

in DE CA and HCA attack animation are both 1.15 I believe unless its changed.

edit: alright found the old AOC data file, it is exactly 13 frames with 10f delay, however attack animation duration is set to 1.3 seconds vs the DE 1.15 seconds.

@Tamerlane7926 is correct. the fire delay in seconds would be at ~0.88s in DE vs at exactly 1s in AOC. add on the fact that DE normal speed is 1.7x while pre DE was 1.5x I believe, makes it even shorter for DE. 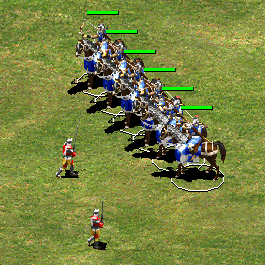 The frame delay is a hidden unit attribute in the Genie Engine games in the Age of Empires series. It determines the number of frames (which measure time) between being tasked to attack a newly selected unit before the attack is followed through. If...

Frame delay is really not a good stat for comparing. Use attack delay for more accurate info(attack delay is derived from frame delay and animation length.