Help with the Fourth Scenario of the Bari Campaign

Having completed Scenario #3 of the Bari Campaign (it was quite a breeze!), I am now stuck on the fourth scenario. This seems more difficult for me because I have so little time to prepare and I don’t know what I should do to stave off the invaders. With so many enemies nearby, I need help trying to find a way through that scenario.

Bari #4 for me was the hardest scenario of all DE

If you’re not opposed to cheesing it a little, here you can find a video that explains how to immediately get your blue ally back in line after he defects. If you do that it should be pretty easy 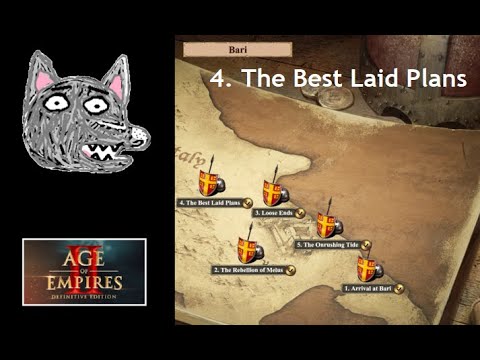 -The best way to understand this mission is as a race against time: You need to amass a blob of fully-upgraded Arbalests before you get overrun. THAT is the objective: Get Arbalests, and get them in sufficient number that the enemy’s forces cannot kill them.

-You still want to do some booming, so it’s worth dropping two extra TCs at the start. I dropped one by the starting gold and one way up north by all the huntable animals. The northern TC was overrun in my game so there might be a better place for it, but I liked having all the fast food available without needing to spend wood. I pumped villagers out from these two new TCs while going Imp with the starting TC relatively quickly (maybe after building 2-3 vils). If you’re on the ball, you want to be researching Bracer and Arbalest just as the enemy arrives to attack.

-I actually did not cheese Capua with Petards. It’s 590 food and 180 gold to build the Petards, and imo those resources are more helpful fueling your boom to Arbalest (those resources alone cover the cost of Bodkin+Bracer, more or less). Capua itself does not build a very threatening military compared to your other enemies and if you get your Arbalest deathblob going it will massacre everything they can throw at you.

-It’s 100% worth building a full wall around the castle, just to help it survive longer and protect archers underneath it. Remember, it does not have to survive to win the scenario. If you can get to an arbalest blob you’ll be able to win even if it falls (that said, I did keep it alive in my run so it’s perfectly doable). Personally, I didn’t build any other walls; instead I had all my villagers focus on the boom and getting Arbalests out.

-Besides arbalests, the only other units you may want early are a few cataphracts from the Castle, for taking down trebuchets or rams a little faster. I didn’t build a single pike and I didn’t get any non-archer upgrades. Remember: Archer blob is your victory condition.

-Once you have a good force of Arbalests surrounding the starting castle, enough to hold it long-term, you can start taking down your opponents. Once your boom is rolling, you can sell food and wood to get 1k gold and hire the Normans as a distraction. At the same time, you can send ~25 arbalests with a trebuchet or two to take down Capua’s castle and get them back on your side. Once that’s done, it should be trivially easy to have the same force move toward Orange and destroy his tower.

-Once Blue and Orange are beaten, it’s up to you. You should be strong enough to hold indefinitely, but I found it fun to just keep pushing and beat the Green and Red. FU Arbalests + Siege Rams and Trebuchets should be more than enough to take out anything they build. Just get some forward buildings up to ensure you can keep pumping out reinforcements, and you should be able to drive them out of Italy with several minutes to spare!

Forget about defending the castle, as soon as the game start train 10 petards and put the gathering point in your allied castle, so as soon as your enemy betray you, you can snipe his castle and get him on you side again.

In the meantime, Wall your base. Not much the castle (that too if you have stone and time) but your economy base in the back of the castle. Build a wall int the south (the road with your ally) and then build several layers of wall (separated one from the other to make rams less effective) in the space between the castle and your economy base.

As for the military, use the starting ones under the castle to try to snipe as many siege units as you can, but wait until you have a solid eco to train more, and use walls to delay your enemy (you can also build some layer of palisade with gaps in it to delay your enemy, so that they have either to destroy it or walk around, to fool a bit the AI).

When your eco is solid, fully upgrade and train arbalest, halberdiers, siege rams and trebs. At that point, it shouldn’t be too difficult to counter what the enemy is throwing at you, but it’ll still be a war of attrition, so be prepared for a long game, the important thing is to have a solid eco behind.

Helping your ally destroying the tower also helps securing your flank, but there is no rush there, and sometimes your ally is even capable of doing it himself. Paying the normans instead is more helpful, because it’s an enemy less to worry about, and they too help securing that flank and the tower. The trade secondary objective is the less important, complete it only when you are already pressuring your opponent with arbs+halbs.

Now, this mission was patched if I’m not mistaken, and in theory, you can defend the castle (the ornulu video is about when this was impossible) but it’s still way easier to simply ignore the castle and go for killing all enemies.

It’s easier to defeat all enemies if you’re a fast player and can do it before one hour. If not, it’s better to just defend the Castle and do the secondary objectives, because if you lose it you won’t be able to build Trebuchets or upgrade Cataphracts.

Yeah I forgot that you don’t have trebs, but siege rams are enough, and you don’t need cataprhacts (especially against teutons or italians).

I defeated under the hour if I remember correctly… or around it. Anyway, it’s far from impossible to defeat them with halbs and arbs.

Honestly I really don’t think you need the petards for knocking out Capua. If you’re Fast Imping into Arbalests those resources are better used for getting upgrades. If you lose the scenario it isn’t going to be because of the troops Capua sends at you.

Yeah but but it’s still the easiest and fastest way to remove the Capua problem.

9 Petards cost a total of 585 food and 180 gold. I think that’s a good value to avoid having another enemy (in comparison, paying the Norman Mercenaries costs 1300 gold, tribute fee included), not to mention that it takes one second to destroy the Castle.

I read this yesterday and tried and FINALLY beat Bari 4 on hard which I’ve been trying to do for over a year. I did however (1) wall of the top of the map so that all enemies would come from the southwest and (2) produce 3 trebs as soon as I hit imp, 1 for the monastery (which I used to pay the normans) and 2 for Capua (put them on neutral before they switched) and then sent them to take out the tower from the norman base.

Just like the other scenarios of the campaign, mass arbalests + halberdiers and siege will kill everything. But you have to be slightly quicker