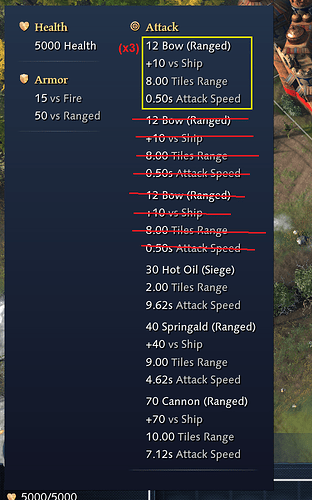 Please use a multiplier for duplicate weapons instead of listing weapon repeatedly.
i.e. The “expanded stats” as I call them that pop up when you hover the cursor over the unit’s “summary stats” is great. But it can be ridiculously long and confusing, because it lists every duplicate weapon individually.
Instead, how about a giant " (x3) " to replace the repeating arrowslits on the keep THREE times.
Maybe you have already fixed this since we know you are fixing the garrison stat issue and we would hate to see 15 repeating garrison arrow stats on castles which take up the entire screen. Just say (x15). This would apply at least to keeps, warships, springald ships, outposts, the barbican, wooden fortresses, etc…
Thanks for reading!

I get what you mean. I think the UI could generally be better in many places. But, I personally think multipliers would just make it even more confusing at a glance. So here is another suggestion;

I threw something together with the current UI style in mind, and tried to add some more flare as well as clarity. I think a “Card” system" for the emplacements would work well here, allowing you to quickly identify which emplacement you have instead of the current long list of stats.

This was made utilizing the same spacing as normal, so it isn’t longer or shorter than the current tooltip in the game. But, I think it conveys information much more effectively and neatly.

Oh I do like those gold bordered boxes. That looks much more clear.