The Rus High Trade House could really use a buff. In its current state with 250 bounty and built next to a forest it will generate about 100 gold/ minute and save you the wood cost of about 6-7 farms. Compared to other castle age landmarks this is a joke and is why abbey of the trinity is used in 90% of games even if it has no real use.

One of the reasons that it does so poorly is because the amount of its area that you can use for gold generation is extremely inefficient. With a normal forest you get less than 25% utilization of the space. 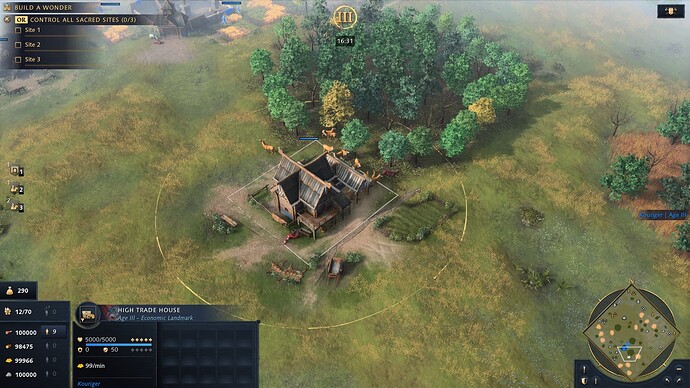 My proposal to improve this is that the gold bonus be reduced from +200% to some value between +100% and +150% but the range of the cabin be increased to cover an entire forest. Using a rough calculation I figured that the HTH in its current state and 250 bounty was generating about 8 gold per tree. Forests have roughly 64 trees in them leading to a gold/min value of 512 g/min this is obviously too high and should be reduced as you get it instantly the moment you hit castle so there is no risk involved. If its bonus is reduced to +100% however it will produce a much more modest ~350 g/min with the ability to increase to 455 with max bounty. The main benefit however would be the increased versatility of being able to place it in your base instead of in an exposed position on the map to just be a worse Regnitz cathedral.

This change would be healthy for Rus as it doesn’t make the Abbey of the Trinity obsolete, Fast castle into abbey would still have the potential for a higher overall gold generation 500 g/min and denying relics from your opponent, as well as providing cheaper warrior priests which can be used in battle.

Lastly I will say that this change would not be without flaws, on certain maps like KOTH or black forest you may be able to get an extremely good spawn to put the HTH in and make an absurd amount of gold the moment you hit castle (not so much with KOTH because you often have to put it in an exposed position). I believe this could be fixed with some kind of a cap on the HTH income as Rus already have an income cap for trees.

I agree that Rus probably needs a buff somewhere, especially after today’s PUP changes. I don’t play enough Rus to suggest one, but this High Trade House buff/change sounds good to me.