How can we make Meso-Civs balanced?

The Mongols used Korean and Chinese ships and crews. They themselves had no Naval experience.

Truth to be told I cant even imagine what would be the change in respective ages. Its not like they evolved much in games timeframe.

The counterpart of their cheap and “weak” units could be their buildings. Meso civ build amazing stuffs. In aoe 3 the gameplay with special buildings were given to Asian civ and Indians.

In AoE4, most civs will already have the Asian Wonder system from AoE3, as confirmed by the devs, so it would never be an unique American trait.

Most European sieges during the Middle Ages were not about breaking walls but rather starving the opponent out or rendering him sick via catapulting corpses of dead animals.

One common Siege technique was also to destabilize the foundations via digging a tunnel right under it.

There’s tons of ways you could implement this for Meso civs if they should be one day part of AOE4.

I would prefer no NAtive Americans. Cannot have a civ so clearly underwhelmingly technologically underdeveloped in the game. I do not want to redo AoE3 DEs fantasy world, thanks.

There are multiple possible ways how to design Native Americans.

Giving all civilisations from the old world very similar stats on generic units isn’t that realistic either. European weapons and armour were designed to counter each other and they were not designed around Chines weapons and armour and the other way round. Native Americans aren’t fundamentally different.

the same siege weapons as Eurasians

(some) foot soldiers are just a lot better at siege

they are just bad on water

Should they have any “captured” Eurasian units like captured cannons, or units that are based on weapons they bought of the Eurasians like the Haudenosaunee using guns or iron tomahawks they bought from Europeans but for the Aztecs, Inca or Maya.
This didn’t happen historically because they lost to quickly but if history just went a little different and the first war against the Aztecs was lost than they’d likely start buying European weapons.
This would of course be limited to late Imperial Age.

Just like they should be weak on water and stop the enemy before it builds navy, the same could be done for walls. Simply a super heavy focus on rushing from early on with a large horde of fast, weak units. I feel like they should have a chance mostly against an enemy force, who just started buidling their “camp”, and gathering a few soldiers. It may be a fully bad idea idk, but in my head it feels good. If they can give you some options on how you rush your opponent, it wont be more predictable than lakota in AOE3, which basically rushes you every time.

I think the other solution would be, since meso units should be very fast and numerous, that they should just run toward the walls, and climb it with ropes and ladders much quicker than an armored European unit. If they are fast enough they can start taking down the enemy before their losses are too big. Since i expect that they wont have horses, most of their units could overcome the opponents walls this way, without the need of destroying it. I think this wouldnt make walling against meso useless because they would still use some units while running close the wall and climbing it to fight the enemy, which is needed, if the meso civs army is much bigger, which should be the case.

The meso should be good at raiding, like really good, but weak against a proper army. If they have a huge swarm of weak units thats much more annoying and hard to deal with than a few strong ones, because they spread out and stop all your eco. The enemy should be able to make far less units, and advance considerably slower, than against other matchups. The meso civ should keep up with the raids even if their losses are heavy, coz they cannot let the enemy build more than a few units. If the enemy reaches castle and able to make some knights it is mostly game over. (Remember that this would take much more time for the enemy, since they have half the eco than usual.)

To sum up I think it should be balanced the way that they always kill and idle half your eco, and thats where the match is balanced. If they manage to slow you down even more they are in a winning position, if less, because they are not aggressive enough, than the European/Asian opponent is more likely to win.
(During the whole game the EU/Asian player should operate with far less units than the meso. Not like 1:2 ratio, more like 1:5 ratio. Meso units really low on stats, but high speed and maybe bonus damage against vills to raid quicker.)

If all this is dumb Im sorry its just my ideas, and it feels the closest to reality while being balanced. (Im no historian.) I will be really happy, if some of the devs ideas are close to these and the meso civs we get in the game will play somwhat like described here. Dont be afraid of totally assymetric civs.

Maybe meso civs could have a bonus damage when there are many of them. Like the hp buff of the state militia in AOE3.
50 men even with sticks and stones could trample 5-10 lightly armored opponent. Ofc with with losses, thats why not hp buff, only attack.

Guys, you do overthink it too much.
Best solution would be to simply make the historical transition from Meso-America to New Spain.

simply make the historical transition from Meso-America to New Spain.

That would not balance the first three ages though?

My idea is to make native units, techs, bonuses available to Spanish and Portuguese in some way, which would make them more unique and interesting and avoid ahistorical or unbalanced addition of full-on Native factions

New Spain should be Imperial, not Castle Age. Also, specially in the time frame of AgeIV, the Spanish Empire kept using a majority of native troops in America. So some spanish troops should be added not replacing the aztec ones (I don’t know if that’s what your image shows).

New Spain should be Imperial, not Castle Age. Also, specially in the time frame of AgeIV, the Spanish Empire kept using a majority of native troops in America. So some spanish troops should be added not replacing the aztec ones (I don’t know if that’s what your image shows).

+1
I think for example, “heavy units” by natives should cost stone instead of gold like 60 Food/25 stone, while Dismounted Spain Conquistador would cost like 60 Food/25 gold and have longer production time and be slower. 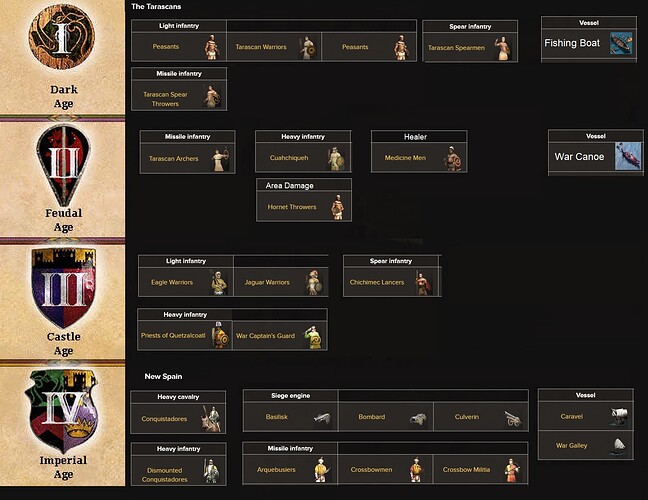 Most other civilisations have 1 Dark Age unit and than two more in Feudal Age.
The basic units seem to be 7 (if you ignore siege)