How Score works in AOE4

These are the results of my deep diving into trying to work out how the end game statistics, but particularly the score columns, work in AOE4. This took a lot of custom games being started and then waiting through the excruciatingly long defeat screen that exists even when surrender against no opponent, so I hope you find it valuable.

Before we get too deep, it’s important to note that these systems are clearly not finished so all of this is extremely subject to change. This also makes it unclear what is even intended. For example, in the clearly unfinished bucket, we have time to age 2 and 3 but not for age 4, and we have max income for food and wood but not gold or stone. In the oddities bucket, largest army is actually your largest population (and includes Mongols sheep from pastures), your starting resources aren’t included in the economy tab and deleting a unit/building counts as a kill/raze. In the definitely bugged bucket, a standard skirmish 1v1 against an AI (or solo) that is surrendered immediately says we have vill high and total population of 12/13 even though we clearly have 6 vills, a scout and a TC each.

Now let’s start at the top, your Total score is broken into 4 categories: Economy, Military, Technology and Society. Your Total score is the one displayed in custom games and the observer mode, and is exactly the sum of the 4 other scores, so I’ll move on to those instead.

The easy one is Technology score: It’s 1/5 of the resources you have invested into finished technologies and upgrades. This includes repeatable ones like weapon emplacements and defensive upgrades for outposts and keeps. Unfortunately for the “technology masters” Delhi, paying nothing for techs means they get no score for it.

The next easiest is Society: It’s 1/5 the resources of your landmarks and/or age up mechanic and your wonder if it’s alive. This starts to get tricky since it’s essentially civ specific. For Abbasids, the House of Wisdom does count, as do building it’s wings. Chinese building the second landmark to go into a dynasty does count, as does Abbasid building the non-Age-up fourth wing. For almost all civs, your starting landmark TC does count (and is worth the usual 700 resources for 140 score, apparently), but for China it doesn’t, which is probably a bug.

Lastly, let’s consider the sum of your Military and Economy scores: It’s 1/5 of the resources of your units and buildings that are currently alive and almost all landmarks. The reason we’re looking at the sum is that each item will be in either Military or Economy, but it’s quite arbitrary which one. From my testing, we have villagers, traders, fishing ships, trade ships and transports in Economy while all other units (including monks) are Military. For buildings, the production structures (barracks/range/stables/siege workshop) and all walls, gates, towers, and keeps are Military, while all other buildings(including farms, docks and town centers) are in Economy.

Landmarks will typically end up in one of these two categories too. Having tested English and Chinese, I conclude the assignment is completely arbitrary. English has White Tower and Berkshire (the “Defensive” landmarks) in Military, and all others (including the two “Military” landmarks) in Economy. Chinese has all landmarks in Economy, regardless of type.

Importantly, since landmarks are also in Society score, they are double counted, worth 2/5 of their value to your overall score rather than everything else giving 1/5. The unfortunate civ this time is Abbasids, whose house of wisdom gives 10 points in Eco, but the wings give no points in either Eco or Mil, only the standard 1/5 in Soc for aging up.

Units, buildings, and wonders you lose will be subtracted from this score, whether killed by an opponent or deleted. “Destroyed” landmarks are still in the game, only dormant, so still count to your score.

To keep playtesters on their toes, your starting sheep is worth 12 points in Economy and if you collect a second sheep at the first instant of the game, that’s another 12 points in Economy. But any further sheep you collect contribute nothing. These sheep points aren’t lost when you kill the sheep, or when you finish it’s carcass. That means the starting allotment of TC(+landmark), scout, 6 vills and 1 (or maybe 2) sheep gives most civs 364 or 376 points to start. The exceptions are Chinese whose TC doesn’t count as a landmark, and the Mongols, who don’t care for your rules.

And that’s all that matters in this game. Just make more stuff and keep it alive, with age ups worth double (usually). It’s worth noting most of the other end game stats, specifically killing units, razing buildings, collecting resources, having high collection rates, collecting relics, owning sacred sites, age up times, map explore %, survival times and idle times don’t contribute to score directly at all. So it would probably be better if those “total” columns only appeared in the overall screen rather than each stats page (or at least got renamed on the separate pages).

Now on to some errata:
Discounts interact strangely with this system. Permanent discounts like English farms and French depots at half price, and HRE’s cheaper Age 4 with Swabia do give less score than the standard counterpart. However temporary discounts like French stables near a keep do not. ie a French knight is worth 48 score whether you paid full price or not. There’s a lot of civ specific stuff here so I’m sure there’s bugs too.

This was a bit hard to test, but conversions gain you no points and lose none for your opponent, but the units dieing does lose you score, which is a bit odd.

As yet undiscussed are the Mongols. Just abandon hope all ye who enter. Their pack/unpack mechanic wreaks absolute havoc on this system. Their starting packed landmark TC is worth 0 society packed and then 80 society unpacked, even though it would presumably be worth 900 wood and therefore 180 score. Packing something again doesn’t lose you points, but unpacking gains points each time. So I stopped investigating before I lost my sanity.

Similarly, Rus’s transforming boats are insane, so I didn’t really bother apart from getting this shot of Rus with negative Mil score for losing attack ships in Mil after building them as fishing ships in Eco. 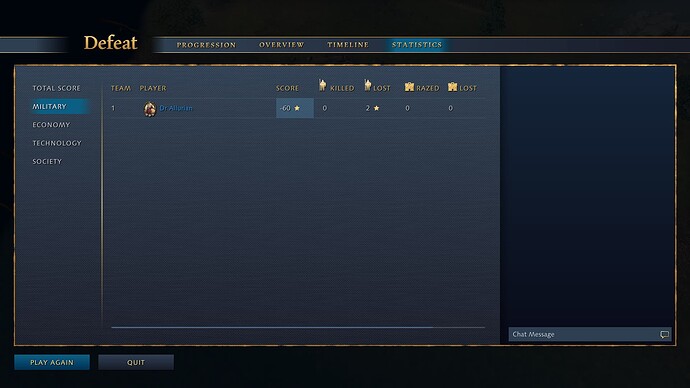 There’s still plenty of civ-specific stuff I left untested, but that’s OK because I’m being informed that this point system is actually irrelevant to the game entirely and the objective is something about landmarks, wonders and sacred sites.

Thank you for your contribution to my understanding of things that may exacerbate my confusion in this game.

I hope that these statistics will also be fixed in the future.

Thank you so very much! My family likes to play AOE, and has together since the first one. We usually play vs AI on hardest and have a good time. Our side game is to compete for high score, and have been extremely confused with score in AOE4. With this we now know we can ignore total score as a bragging rights measure as it is as of now totally broken. We will still fight over most kills, most resources, etc…

Dev’s please work on the score system. We would like to have a system that makes whatever you do meaningful to the score, I also feel that having price reduction lower the value of your tech’s is particularly insulting as it punishes you scorewise for being efficient.

Please and thank you!

wow this work is awesome! Surely many things are left to be done for devs lol. And for me, the most frustrating part of score is military. A teammate who just build an army and has launched no attack yet has a higher military score than a 100/20 KD player