[HRE] Suggestion for the devs: How to improve/change the HRE!

Yeah but you get prelates, and 2 of your 6 landmarks are religious buildings.

Don’t get me wrong, I’m not against an early monastery, but it has to have a purpose, not for just having a monastery for the sake of it.

I believe that, for example, inspired warriors as it is now it could be more meaningful in age 2, when micro is more important and easy due to the low number of units. So in that case I would be in favor of an early monastery, but of course the HRE should also get a discount on it, or the tech should be like super cheap, because even with the HRE eco, 750 resources are a lot.

This thread is only partially about the current balance issues, which could very well be fixed easily by tuning some numbers, giving some more starting res or simply changing some small things. But that’s not the core of this thread. This thread is about the HRE’s identity as a civ with mechanics that synergize and actually resemble the civ in a fitting manner, instead of this weird construct it is right now. The power of the HRE is built around landmarks. Landmakrs make the difference for this civ, because everything else is either mediocre, useless or just not in line with the actual civilization and what it has to offer.

That’s why we have the Sale of Indulgences idea here. Same goes for the Ritterbruder or the Landsknecht, who needs to be a different kind of soldier that deserves to be called mercenary and who actually should also be an age IV only unit. Castle Age is not the right age for this unit, but since the HRE lacks uniqueness especially in units, the Landsknecht is somewhat forced into the CA. And since a new special unit will not come any time soon if at all, we have to accept it and try to work with this. Hence we have the suggestion of a new tech called “Return of the Crusaders” to somewhat catch two flies at once: It’s supposed to show the elaborated plate work of the HRE, their use of powerful heavy cavalry as well as the connection to the Teutonic Order. A stronger knight line would give the HRE a much needed diversity as well as display the actual historical strengths of the civ in a comprehensible way. Same goes for the ideas with Spearmen that turn into Pikemen of Landsknecht origin starting in castle age as well as the Arquebus Landsknecht, who is more expensive and slightly stronger than the usual HC, but also replaces him.

The gameplay improvements (inspiring during batte, healing gives inspiration, the new toggle buttons etc) for monks and especially prelates are supposed to help the HRE to make actual use of prelates in battle, which is also supposed to play into the Sale of Indulgences mechanic (which simply rewards you for making use of your prelates to somewhat offset the susceptibility that comes with it). Castle Age Landmarks should thus be centered around a military heavy or a religion heavy approach, with the idea of helping both production and economy. The HRE needs more and much better reasons to actually want to take prelates into battle (the “new” Benediction effect (+1/1 armor for prelates and +5% more movement speed for them and all inf) also aims towards that goal. This all goes hand in hand with a reduction of economical dependencies on relics, which in turn should give the HRE unique boni (for example mass inspiration or something like that via wololo), but without being so enormously paramount for an advantageous economy. I’d be fine with 125% to 150% gold per relic (but only when put into a monastery or Regnitz, which would be a full on monastery landmark anyway), while towers and keeps give the normal amount. That way you want relics in your monastery, while it still makes sense to put them in key fortifications. And with a working Sale of Indulgences mechanic the HRE would be much less dependent on actually getting bonus gold from relics.

Swabia is a landmark at fault, because it makes you want to reach imp as fast as possible, because the ages before are just not as worthwihle. The HRE should be free from basing all their tactics so massively on landmarks rather than unit compositions and their possibilities in each age. That’s also why we have the suggestion of changing Swabia completely into a landmark that benefits trade, while the Elzbach becomes much more interesting as a defensive landmark (relic effect for capable buildings in the influence). And that’s also why many ideas in this thread are supposed to help the HRE to make 2 or 3 tc play more viable.

The HRE is a civ that is rather weak in general, but has some chunky landmarks that give huge boosts (Regnitz, Burgrave, Swabia) to make up for all their shortcomings. And I think that this is nothing but an awful civ design.

The early monastery idea is also a result of the lacking civ identity. But we would still need to find a good reason for that. DoctBaghi is right when he says that simply putting the monastery into age II is not enough to actually make it worthwhile to build one. One idea could be to have the age II monastery be called a chapel that turns into a monastery with the age up. The chapel is rather cheap in wood costs and can only produce prelates plus maybe another tech. Maybe even inspired warriors. 15% more dmg is not that much for age II units, but 1/1 armor would help a lot. That’s just one idea, though. Inspired warriors needs a lot of help, but for age II it’d be quite good in its current state. It just needs to be better for CA and imp.

Ps.: I really like the mortar idea for a unique HRE artillery unit. The Pumhart von Steyr comes to mind, which was used by the Habsburgians. 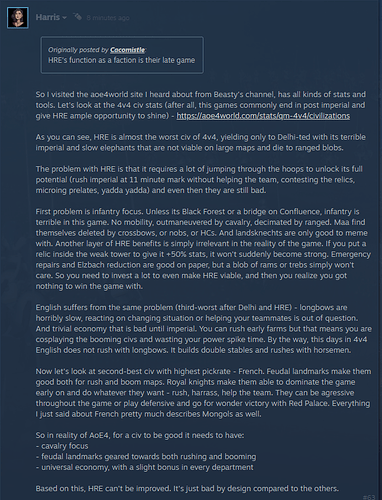 Yes, this is very spot on. I hope the devs realize that the civ needs a lot of help. It is the worst designed civ of them all. And for many reasons.