i think we have to talk,

if we take a look at the ladder of the competitiv players we can see that noboby is playing HRE.
So why that ?
The economy of the HRE is strong so that cant be the problem.

So lets have a look at the special units
The monk of the HRE give us a big economy bost wich can realy help in the beginnig but his combat support does not work because of the fact that he can only buff 10 soldiers wich is even in the first ages to less also he slows down your army because he did not be benefit on the speed tech.Also he cant be protect like in aoe 2 where you are able to take formation around weak units like the squere formation.

The Landsknecht is a very migthy unit at the first look but only at the first look… it can be easy take out because of its low hp and low armor and he has in comparison to the france crossbow man and the france knigth or the english longbow no special ability.Also it seems to be a good counter for MAA wich are already in the best form in HRE inventory but lose agianst knigths crossbow.

So in my opinion there are 2 simpel ways to fix the problem,

Historical the main weapon of the Landsknecht was the pike so i think that would not be the worst option. 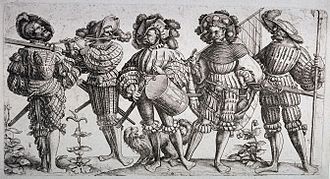 Just like the Reisläufer, Landsknecht formations consisted of men trained and armed with pikes, halberds, and swords. 300 men of a Fähnlein would be armed with a pike, though a Landsknecht's pike was generally shorter than a Reisläufer's at about 4.2 meters (14 ft). Experienced and well-equipped soldiers, receiving double a normal Landsknecht's pay and getting the title Doppelsöldner, made up a quarter of each Fähnlein. 50 of these men were armed with a halberd or with a 66-inch (1 Tactics were a...

Easly make them a counter unit to cav and give them the abilty to deal with inf. Arrows and Crossbows will still be thier counter so it seems not unbalanced to me.

I think the game needs some time to settle. You make a lot of assumptions that you can’t really know (‘no one’ plays the HRE, the Landsknecht is not being used). I think we just all need to settle down, get the bugs fixed and thoroughly play the game before making any changes based on the first weeks of play. Some things need time to really be discoveredd and used in a viable comp. For example you’re not even mentioning the splash damage of the Landsknecht.

Anyway, all I’m saying is…let’s settle down first, have the most important bugs fixed and then see how strong the civs will be and how often they’re used. Based on months of data and tournaments.

so please tell me how should i play them because if i mix them under my other units the get sniped out. I think HRE is still a Strong factions and i realy like to play them but i would say at the moment the best unit of them are the spearman and the MAA , but the real special unit are to expensiv with the monk you slow down your army wich you tech high with speed wich is completley unlogical for me and the landsknecht isn´t what he should be.
I like the eco mechanic of the monk realy and it would be totay fine for me if he can only bost your eco and do the other monk stuff.
Anyway thanks for your comment you are porbally rigth

As with everything, it depends on the situation haha. They do really good in mass against clumped up infantry or villagers. But specifically with the Landsknecht I feel like the big brain pro play still has to be discovered for this unit. Also they look cool as fck. I love how they just leap into their battles lol. This video might help you to decide to use them or not: The problem is that strong economy requires you to make it to castle and obtain 3 relics. until that point defending aggression is nothing special for hre, and will often feel like you are behind until you obtain 3 relics.

Ok but I can slaugther villagers with every other unit and the Landsknecht seems to be the hard counter for Waffenknecht wich HRE has allready the best so yeah you got the counter for a unit wich is already in the best version in my inventar.Wich make like the monk down speed and the amry up speed tech no seens to me

would go a long way

or simply give them to the Landsknechten too. It could be all they need / or more hp. If they got to meele combat and get a view more hits off.
Im talking about range armor something around 2-3 more

Ok but I can slaugther villagers with every other unit and the Landsknecht seems to be the hard counter for Waffenknecht wich HRE has allready the best so yeah you got the counter for a unit wich is already in the best version in my inventar.Wich make like the monk down speed and the amry up speed tech no seens to me

No I said clumped up infantry and villagers. And mainly the ‘clumped up’ part. Because of the splash damage they’re really good against that.

ok but to kill clumped up villengers i need a careless enemy and its never a good idea to make a strategey wich presupposing a mistake of the enemy, so the clumped up infantry point goes to you but a unit for this price for only one use seems not so great… As longe as i think about this i would complety fine with everything if they give the landsknecht the army buff of the monk the unit is fast as the other units i can bring in small ammount to kill clumped upinfantry as you say and it would all funny because of the buffs arround him he and his crew will stay at live

Landsknecht seem a bit weak so does HRE compaired to their goal being the go to infantry civ. …

Hope there is a middle thing

Hm I get what you’re saying but it doesn’t need to be a mistake or careless enemy. You could take a bunch of landsknechts and destroy the enemy’s goldmining villagers for example. Yes you could do this with other units too, but with the landsknecht you just killed more in less time than other units, so you can get them faster back to safety again too.

Anyway, overall my main point is still that I think we should wait much longer (at least until all civs are cleared of the bugs that have an impact on gameplay) before drawing conclusions and thinking how we should change civilizations.

Haha oh I feel you on that. I’m currently just over the point of frustration and disappointment but that had to do with how lazy and/or hurried everything seemed to me, like indeed the bugs and so many wrong tooltips/wrong mathematics/wrong information in the game, wrong info on patch notes, etc.
I’m cooling off from that one and after the last dev stream a couple of days ago I’m actually getting hopeful again.

It’s just…as far as drawing conclusions on how much a civ is played, how balanced the civs are, how good a certain civ or a certain unit is, I just think we need to calm down a bit on that one and really wait for some stats/data of long(er)-term research and tournaments.

im still having a lot of fun, just won a bunch of HRE QMs and a Delhi QM… the game is definitely playable

yes it has bugs, but the game wasnt delayed for months, like practically every other game in recent years, and on top of that so many of those games still had worse bugs (like making the game unplayable or simply being super boring)

I didn´t say the game is not playeble but i think that HRE have a lack of good special units and there are less option then in aoe 2 like formation also the pathfinding is not even better and when i buy a new game from a frenchies i normaly think ther should be some improvments. I really like the game like the most of us. I think it has greate potenial but ther are some issues wich we should talk about. Also I agree completly with MrBeevy when he said that we should wait to the point when the bugs are fixed and there is more data. But I also think we can already talk about wishes and suggestions for the game.

I think it would be really cool if they added the Black Riders to the Holy Roman Empire. They were always may favorite unit in Age3

the Black Riders to the Holy Roman Empire. They were always may favorite unit in Age3

I also think a new gunpowder infantry unit would be good for the HRE.

I previously suggested that the HRE and Chinese should have Aquebruisers instead of just regular handcannoniers. Like the Chinese, the Holy Roman Empire was an early adopter of firearm’s technology, and made use of the matchlock arquebus during this game’s timeframe. As for the stats, i think the damage should be the same as the handcannon, but it would have more range.