Huaraca bonus vs canon not shown in HUD?

Hi, it seems there is some missing information in Huaraca Tooltip : the bonus damage to cannons is missing.

5 Base Huaraca destroy a base cannon in one go. But the stat unit doesn’t display any bonus versus cannon, which shouldn’t make them that strong versus cannon (which have a high resistance versus ranged).

Huaraca are good against cannons because they do not do ranged damage - they do siege damage (to all units, not just to buildings). Abus Guns also work this way. I can’t remember their stats (or those of cannons, for that matter) well enough to say whether or not five of them would be able to kill something like a base Falconet with one shot without multipliers, but maybe you could try the scenario editor and see if they do in fact have any hidden multipliers against artillery.

I can confirm from the game files that Huaraca have no hidden multipliers. What you see is what you get.

How does that compare to a culv?

is this shown as siege damage or ranged damage on iu?

So the fact that it is not ranged damaged mean that the distance resistance from the canon is not taken into consideration?
Which make the unit quite op in my opinion. Relative to its cost/effectiveness. 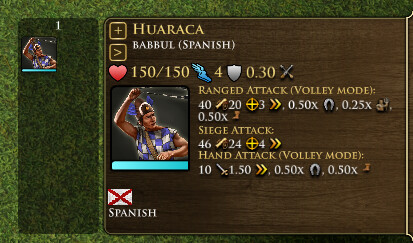 on editor tool, it does 40 damage on ranged atacck despite cannons ranged resistance, this have no sense

Yes, the Huaraca’s attack ignores the ranged resist of the cannon.