Do you still have this issue in the last update?

For me, I didn’t get the issue now, but because we already have made multiple times the Coop campagns so we didn’t tested it recently.

But my friend got something similar with the last update, only one time :

Yesterday he tried to launch directly after starting AOE2DE the Devapala 1, the scenario launched correctly.

I will try to launch a coop game tonight to see (also in previous patches, the AI error was occuring with P2 as an AI and also as a human).

Thank you so much, let me know how it goes ^^

Hi !
I tried everything to try to get the bug, but I can’t reproduce it so it seems good !

Which error appears Wh1tty? Do you have a video?

I’m having exactly the same problem. I can’t host a coop game with my brother. I always have “err5001”. When he hosts, everything works fine.

I have no mods, I run Windows 11 and Steam. My brother runs Windows 10 and Steam. I tried erasing and reinstalling the game, deleting the Age of Empires 2 DE folder in the user folder, checking the files integrity, rebooting.

I remember being able to host coop games. The problem started at some point during the previous months. Maybe when I upgraded to Windows 11, or with some Age II DE update.

Here is a screenshot of the error message. 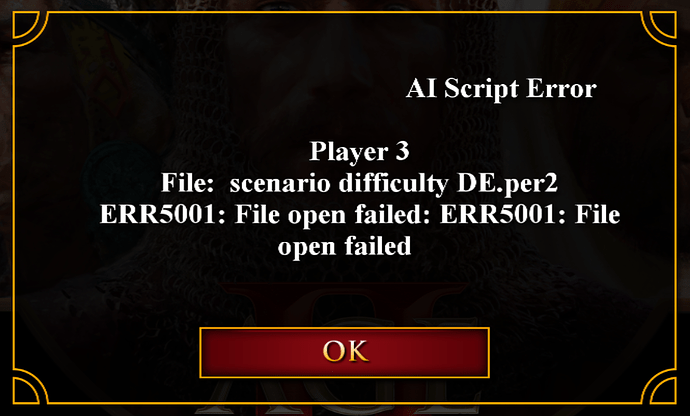 Do you have antivirus or other programs that could interfere with the game?

Can you add the game to the whitelist in those programs? C:\Program Files (x86)\Steam\steamapps\common\AoE2DE is the default, AoE2DE_s.exe is there.

Let me know if the problem is fixed!

Thank you for your time. I only use Windows 11 standard’s antivirus, with the preset settings. I’ve never tweaked it. I’ve added the exclusion. I’ll tell you if it’s fixed next time I play coop, probably next saturday.

Unfortunately no luck. I disabled my firewall and failed and then added permissions but still no joy. I can play online still but not create my own, It only works if I join someone else’s game.