I’ve mostly been playing the campaign or skirmish rounds, however over the past few weeks I have been going to play multiplayer games and every time I try to start one a box pops up saying Training Mastery Incomplete. I can go to my masteries and it tells me that I did, in fact complete them. I finished all of the Art of War campaigns and the entire English campaign. Any help would be greatly appreciated. Thanks!

The training mastery should be in there, which you need to open access to the civilisation masteries.

I didn’t realise multiplayer wasn’t accessible until this was completed, so this may not help. Give it a shot.

Thanks for your insight. I took a look at the mastery like you suggested. It says I completed it on 10/29. But when I click on Search for Game in multiplayer, it pops up and says Training Mastery Incomplete. I’m wondering why that is popping up if I completed the training mastery? Here are some pictures showing what it looks like. 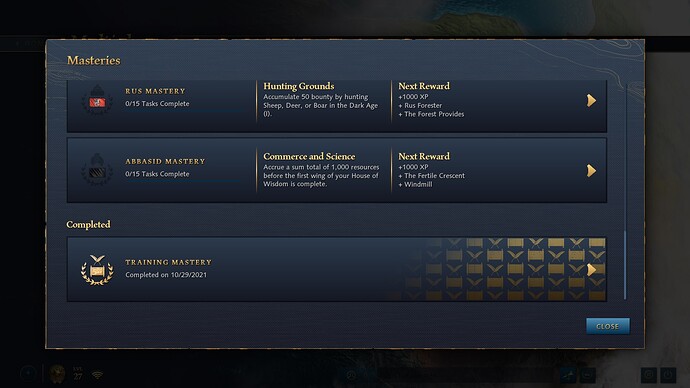 Thanks so much for your help!

And here is the picture showing the pop up window. 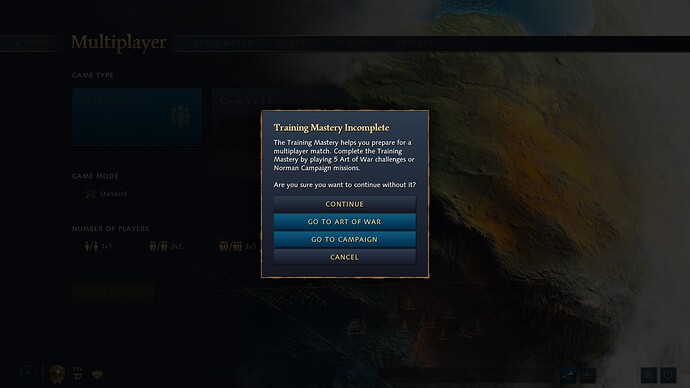 Ah, can you remember which Norman Campaign mission(s) you did in two parts? I.E. Which one you used a save game file to complete?

That’s the one which isn’t giving you credit.
Check for the Norman campaign achievement, if you don’t have it even though you’ve done it, thats your issue.

Save files do not grant achievements/completions.

Thanks for your help! I checked and it looks like I do have the Norman achievement. Here is a pic of it. 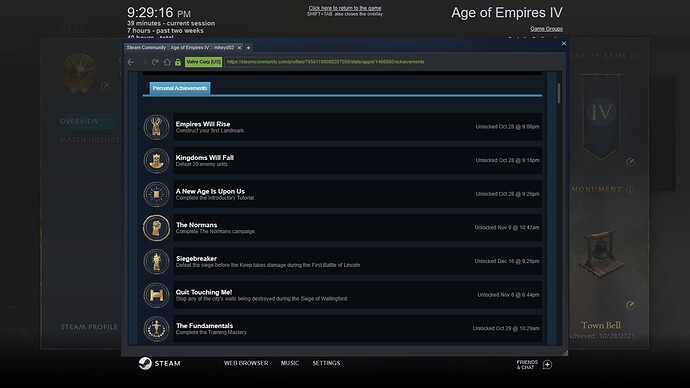 But, I do remember completing some of the campaign missions in two sittings. I clicked “load game” to see if I could find which games I manually saved. I found one and redid it in one sitting but that didn’t change anything. I believe there were more missions that I had saved…is there a way I can easily check which ones they are, or would you suggest that I need to play the whole campaign over again just to be 100% sure?

Regrettably, there isn’t a way to tell which ones haven’t counted towards it.
Guess first, do those, and hopefully you’ll get that achievement/completion pop up - before you end up doing them all.

If you decide to complete the civ masteries, same rule applies. Save files prevent them being completed.

Alrighty, I’ll give it a go and see what I come up with. Thank you so much for your time, your help, and the information about save games. I appreciate it!

I’m having quite a pain with masteries, for some reason I can’t even get past the second one in the English list, which is a simple make 30 Longbowmen from the Council Hall in the Feudal Age…no idea what I am getting wrong here, do I need to complete the whole game, do I have to actually win it or can I surrender? It’s a pain having to go through a full game for the sake of a task like this. I managed to do the first mastery with no issues during a team game I played with my partner against two AI enemies…frustrating!