Yes especially when the models are already available.

Amelia Black is perfect for USA

I think when the update finally comes for the Iroquois and Lakota civs then we’ll get skins for their Warchiefs. Potentially, they could give additional (2 or more) skins for the USA civ during the North American Natives event simultaneously.

The Iroquois, Lakota and USA civs could have a similar number of skins for their Hero units as the newly added Maltese and Italian civs - 4 alternative skins!

And of course Major Cooper 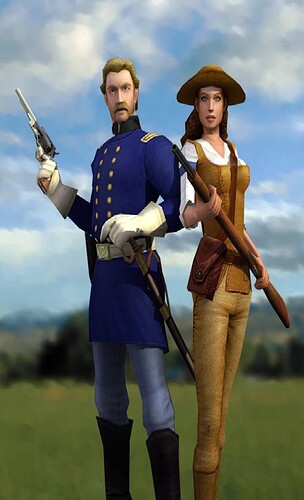 Skin for Explorer from Germans civ:

Skin for Explorer from Ottomans civ:

Skin for Explorer from French civ:

Skin for Explorer from russians civ:

I don’t know why many people didn’t like the AOE-3 (Black family) campaigns. It always had a good atmosphere with conspiracies, legends and others. If they put astronauts, why not campaign leaders? XD

It may not be a popular opinion, but for me the Black family campaign is really epic. In my opinion, it would be nice to see a similar story of a family in the future, which plays quite an important role in the history of mankind (a fictional novel based on historical events).

It would be nice to see a story similar to that of the Black family, but in Europe. History of a knightly family (from the Holy Roman Empire or the Teutonic Order) who played a key role in the history of Europe (the Thirty Years’ War, Napoleonic Wars, etc.). I think that would be great.

Of course, I would like a further continuation of the Historical Battles as a correctly historical supplement to the game.

I did like the campaign but it was a little to much anachronistic chaos sometimes.
Especially in the Amelia campaign.

There are no shortage of amazing French explorers that could be used as explorers for the French civ. Please don’t give us a mime.

You know damned well we’re gonna get a mime armed with a baguette.

jeje no aparece aun pero ya me estoy riendo xd

Chayton and Morgen Black are now added, as well as Chen Lao and Huang Jian. I hope in the future there will be more