WE REALLY NEED NEWS ABOUT AOE4.

literally , in this 5 days only two threads about the game had been created , in discord the situation is not much better , we had only been posting memes and WAIT , and… history class . That is boring as hell

i know we had info recently , but… why dont publish new screenshots about the game every week or at least dev diaries or that stuff! 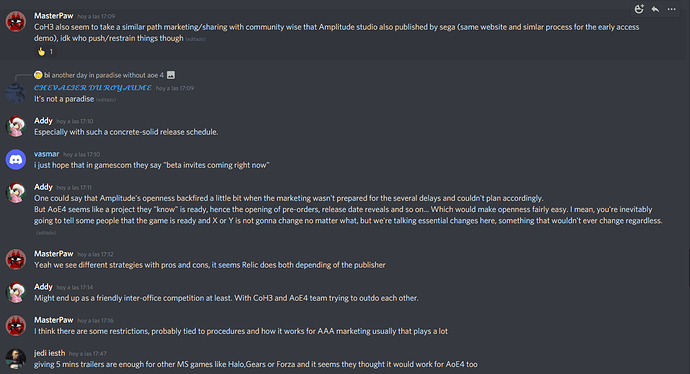 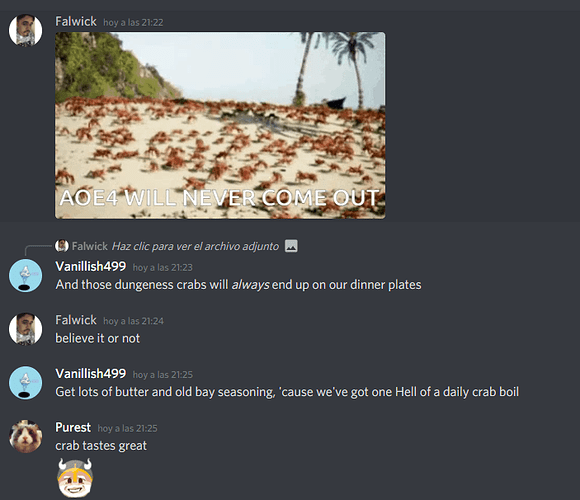 and that is just a little taste about discord , we dont have nothing to talk about! give us something pls

believe it or not , the gap betwen hours was not artificial , someone write at 17:00 and the conversation re-start at 21:00 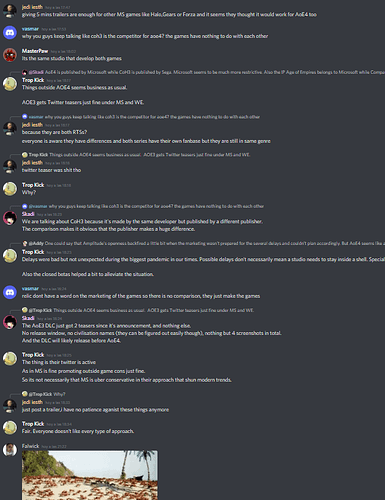 Hope we have news soon. I see 10 times the forums and nothing goes on. The more the anticipating, the longer the waiting… ( Murphy’s law… )

i mean discord is the same thing when it comes to AOE 3, they are generally speaking fairly negative over there.

Personally, i rather using forums than Reddit or discord.
It’s much better for posting and you can put a lot of information in an ordinate way.

For me discord is irrelevant as a source of information, and the fact that you use the activity of the users in there as a measure meter for how live the game social media is it doesn’t mean anything at all.

yep, the hype dies. and fast. WHich it wouldnt if tehre was more communication, or a beta in sight

but it seems they chose the hybe by withholding info route. Always a great choice to kill of any conversation afte r a month

screenshotting random people on discord and posting them on forum.

what a useless spam topic

Age of 3 African dlc hype is getting hype more than age of 4. Total war saying, this is is shameful display.

We can all agree that their marketing for this game has been utterly crap 100%. I wonder how they thought this was a good idea of a marketing.

You have been in the discord to see in what situation we are? I’m a active age of empires discord user , and that is not random people , they are the people that talk frequently in discord. And THAT IS THE TRUE . And it’s not an usseless topic , is what we are complaining in discord and Reddit . Stop hating every topic because it doesn’t show respect to the developers of this game . I like the game , I don’t like the marketing , if I don’t like anything I say it , that is what this forum porpose is

Yes , and that is true , I like the game but not the marketing

Yea that is true , but in forums we didn’t have any new tropic since yesterday so…

Some comments I think we all will agree:

doesn’t show respect to the developers

Marketing has nothing to do with the developers. I also like the game a lot. But marketing is something different. We want update. At the same time, we miss something. We are not in Kickstarter where we get frequently updates. For game releases, it has to do with companies. Some companies gives a lot of information before release, Microsoft does not give so many. I would like to get more, but this has nothing to do with developers. It is the way they work.
Beta testing is something different. But still big companies that have their own testers does not work a lot with beta testing. I would like the earlier beta testing hopping to pick me, but I think I am out of topic now…

Personally, I do not hate any topic. I think non here hates any topic. Just there are people who when they see an opinion and disagree, they say their opinion also. The way they do, characterize them. In my opinion, it is more important the way you say something than what you are saying. ( obviously if you say something really bad, than, the way does not matter, it will always be bad… )

Personally I only not hate, just dislike one behavior. The ‘toxic’ one. For example I saw someone yesterday that told that he has decided to buy the game so that he made a very bad review and return it. He has decided this without have seen the game yet practically. This is the only time that I thought that this post better had never been posted. But except from this all arguments are welcome and help the game in my opinion so that each one know and the opinion of others so that we found the best solution.

PS: Marketing is a very hard equation. It has a lot of parameters we do not know. For example we know that we wanted earlier the beta testing, we also know that we want news, we might missing that they decided to make some enchant graphics for models because of complains. Foe r example they did this for the scaling of arrows and units. Without knowing all parameters it is hard to judge something.

I think i respect that opinion , but there are some things I need to cover off , just for having the ideas clear .

Marketing has nothing to do with the developers. I also like the game a lot. But marketing is something different.

That is what this topic is about , but resumed .

Personally, I do not hate any topic. I think non here hates any topic.

My response wasn’t for you , it was for LostCord , another user that have another opinion . The word that i used “hating” is wrong , I tried to say “stop attempting to debunk any bad topic that you see” , sorry my English is not perfect , because I’m a Spanish native speaker . I tried to say that to LostCord

PS: Marketing is a very hard equation. It has a lot of parameters we do not know. For example we know that we wanted earlier the beta testing, we also know that we want news, we might missing that they decided to make some enchant graphics for models because of complains. Foe r example they did this for the scaling of arrows and units. Without knowing all parameters it is hard to judge something. 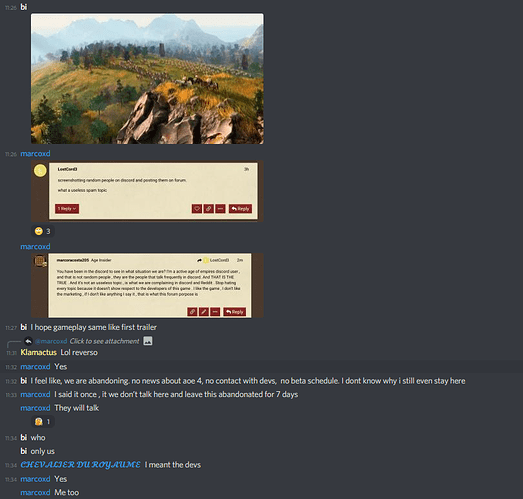 I don’t think that is bad marketing, is fear what is ruin them. After all the hate and complains, instead of showing us more to get more feedback, they choose the path of silence, trying to resolve everything before launch.
But it’s a mistake, they’re losing the chance to get more feedback and the concerns of the community about the game and all the things they could changes before launch.

The fear to be rejected is what is producing so much silence… and anger in some members of the community.

Not everyone will have the chance to play the beta, so they should show us more of the game with videos and pictures. People that don’t play the beta also want the game and probably will purchase it too so their opinion is very important and valuable too.

In my case, i’m ok with their decision if the game will be worth of the price, but I have to say that I would really love to see some actual gameplay from a match, without edition.

I expect in 36-40 days the announcement of beta during gamescom.

If we are lucky we will see and demonstration PvP games from some top players during the event. At least this is what I hope… Till then I don’t expect any news. ( This thought helps the anticipation. If we have news earlier, they are welcome, else, you don’t miss something you don’t expect )

With the game so close to release I would imagine that they’re in their crunch time (hopefully not) or changes are so frequent that any posted information will be immediately obsolete.

they probably have no good build yet. or they know ppl will just continue bashing the graphics. bt thats what will hapen anywaqy, so no need to delay that imo.