I LOVE the idea of making walls, placing some crossbows or w/e up there and making this unapproachable emplacement.

But right now they are too easily dealt with via trebs and the like, aren’t super cost effective, plus units on them are only strong into ranged damage, not siege so they can just pummeled to death along with the walls.

Maybe a different game mode, or adjustments to units?

Just wondering if anyone has ideas on this.

Give them a halo, as long as the player’s unit is on the city wall, it can cause -10%~-20% movement speed and attack speed to the enemies near the city wall, so there will definitely be many people who are more willing to use the city wall stationing system.

Just a simple damage and/or range increase to ranged units on walls would be enough to encourage people to use that mechanic.

Right now it’s a gimmick, just like the stealth forests.

It’s amazing that almost 20 years ago, the first Battle for Middle Earth RTS had more useful units on walls as there was a damage multiplier and you could also build siege emplacements: 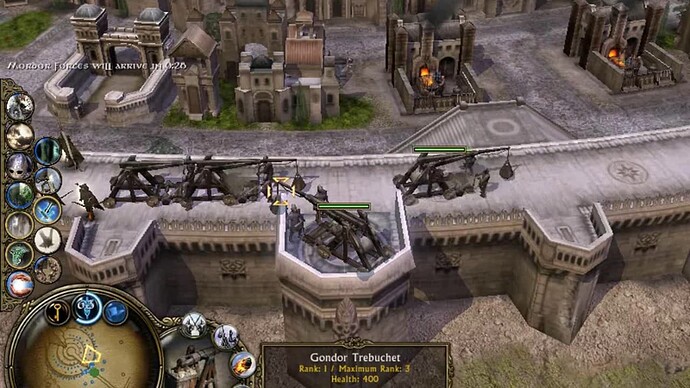 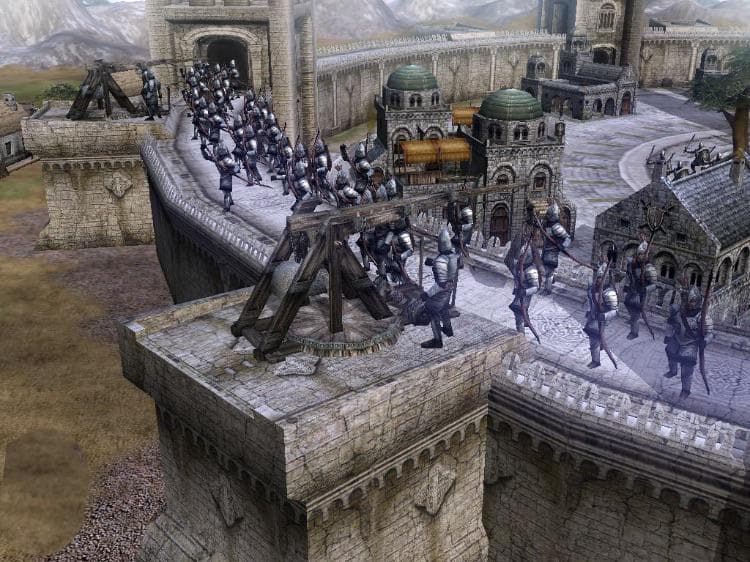 Also, they did a clever trick where during a releoad it has the holograph units from the campaigns cutscenes jumping around working the treb or what-have-you. Which I think is actually pretty dope way to both show “actual” soldiers plus remove the messiness of having footman perma attached to siege and muddying up the battlefields with excess “units” that aren’t really there.

and looks better and with more details than aoe 4.

Have you seen anyone using those towers? I mean, for anything other than exploiting some dumb mechanic? Or have you seen actually putting soldiers on top of walls for that matter? I have only seen people mis-clicking or bugs causing villagers to get up there, which is annoying instead of useful.

I hate the yellow ghosts, by the way. That works in something like the campaign where it’s integrated in the real-world backgrounds and such, but it’s an awful thing elsewhere because it’s zero consistent: So, you assigned 10 villagers to build a keep, but then you have a random number of ghosts actually building it? So who’s actually building it? Siege engines move by themselves, but need the ghosts to fire? Why? Who’s pushing them then?

If you are not going to offer productive ideas and contribute towards and actual conversation realted to the OP , and instead just whine about issue you have like you always do on every post, I will not be engaging with you.

No, I haven’t seen people use wall garrisons or stone towers, and I’m asking people’s thoughts on possible ways to implement them better. Not asking you to show other games that you liked and tell me how Relic is garbage.

If you are suggesting a complete overhaul on the walls and saying they should clone LOTR, great. JUST SAY THAT, but why just spew negativity? It’s not productive for anyone. Stop.

You offered one proposal which was “increase damage” and then proceeded into cry mode.

Also, they did a clever trick where during a releoad it has the holograph units from the campaigns cutscenes jumping around working the treb or what-have-you. Which I think is actually pretty dope way to both show “actual” soldiers plus remove the messiness of having footman perma attached to siege and muddying up the battlefields with excess “units” that aren’t really there.

And was your first post helpful towards the original topic? You spent 1 line talking about towers which nobody uses and then a whole paragraph off-topic.

I proposed damage/range increases for units on walls as well as the option to build siege emplacements and I gave one example of an RTS where it was implemented.

You literally attacked the game for not having “real units” on the siege weapons and I explained the tie in with the campaign to show how that particular issue was addressed.

Also, you did NOT anywhere suggest they implement a similar mechanic into AoE4. You literally just gave an example of an RTS you thought did a better job and again, said it with negative connotations.

A better way to phrase it to forward the conversation would be something like:

“In BFME they had this mechanic and it seemed to work well, maybe something like this could help shift them to be more widly used”

Good topic. Yes placing units on stone walls should be much more useful and relevant. It is one of the few new features of AOE4. A feature I looked really forward to. Unfortunately I very rarely see placing units on walls because it is not really relevant.

One of the main reasons for this is in my opinion the weakness of stone walls. They get too easily destroyed. Especially by bombards which are too strong against units and buildings.

@EricGonzalezM Battle for Middle Earth RTS is an awesome game. Sadly to see that it looks better and with more detail than AOE4, which was released years later.