If we will get an African DLC, the Kanem-Bornu empire should aboslutely be part of it

IMO the next DLC should focus for sure on Africa, anf there are many great options and empires left there tp cover like Somalis (Adal sultanate), Zimbabwi empire and Kanem-Bornu empire.

Here I want to talk about the Kanem-Bornu empire and why it should be in the game.

The Kanem–Bornu Empire existed in areas which Cameroon, Central African Republic, Chad, and Nigeria. It was known to the Arabian geographers as the Kanem Empire from the 8th century AD onward and lasted as the independent kingdom of Bornu (the Bornu Empire ) until 1900.

This empire got a great influence and power in central-north Africa with great power of wealth and military!

The Kanem empire played a major role on the trans-Saharan trade route.

Sayfawa was name that the muslims kings of Kanem empire called themselvs with (or mai) got a great power to the point that when Mai Dunama was the head of Sayfawa went to Hajj (Pilgrimage) to Mecca his wealth included 100,000 horsemen and 120,000 soldiers!

The Kanem-Bornu empire was a very famous for their cavalry in central and north Africa and also their infantry with great economy and leadership that helped to keep the empire alive and existed from 700AD to 1900AD!

It was known to the Arabian geographers as the Kanem Empire

This can be the name.

I would suggest calling them Hausa.

They would be an umbrella civilization representing the Kanem-Bornu Empire and the Hausa city-states. The Hausa are already a civ in AoE3 and have a good name recognition.

A small West African DLC (similar to LotW) with Hausa and Soninke (Ghanaians) would be nice. 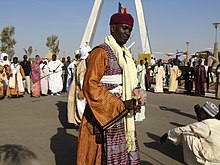 The Kanembu are an ethnic group of Chad, generally considered the modern descendants of the Kanem-Bornu Empire. The Kanembu number an estimated 890,000 people, located primarily in Chad's Lac Prefecture but also in Chari-Baguirmi and Kanem prefectures. They speak the Kanembu language, which the Kanuri language is closely related to, with many speaking Arabic and sometimes nowadays French as a second language. The word Kanembu means "the people [bu] of Kanem." For over a thousand years the Kane...

But I have no problem with Hausa.

A Central Sahel umbrella that includes them and the Hausa can work decently, just as the Malians actually cover the Western Sahel, including Benin, Ghana and the Songhai Empire.

Hausa and Kanembu are two different civilizations. Any umbrella between them is inappropriate.

I agree with @SmileyDragon12, the Kanem-Bornu Empire should be added. They had a vast empire that dominated Central Africa.

A Central Sahel umbrella that includes them and the Hausa can work decently, just as the Malians actually cover the Western Sahel, including Benin, Ghana and the Songhai Empire.

I don’t know who came up with this but Benin and Songhai aren’t mentioned in the Malian civilization. Ghanaians on the other hand were Malian people.

It depends on how many African civilizations the game accepts and how large the scale we want them to be with.

Kanembu is a the best name for this civ.

Bornu people will be upset, no?

Hausa and Kanembu are two different civilizations. Any umbrella between them is inappropriate.

I think a Hausa umbrella is appropriate to represent all the peoples of the Lake Chad region.

I know. And I would have called them Tamils instead, which would have left the door open for other South Indian civilizations as well. But that is not the topic of this thread.

I support the addition of the Kanembu/Hausa (or whatever you end up calling them).

Also, the Sundiata campaign would benefit greatly from the addition of the Soninke (representing the Ghana Empire and the Sosso people)

There is nothing wrong with having an umbrella civi called bantu to save up civi slots,not an ideal solution but certainly a possibility.

I agree with this, AoE 2 always named their civs after the people that live in that areas; Italians, Mongols, Cumans, etc…

I don’t like grouping Hausa and Kanembus into a single umbrella. They belong to completelly separate languages families. (Afroasiatic and Nilo-Saharian respectively)

What campaign would you give the Kanembu?

How they expanded from lake chad.

There is one well recorded ruler of Kanem Bornu (Mai Idris Alooma) and a few others of which we have enough informantion to make a campaign (Mai Ali Gazi, Mai Dunama Dubbalemi)

I’d like to find more detailed info on Idris Alooma’s and Dabbalemi’s military campaigns, they seem like they have good potential. But I’m sure the devs can come up with something.

Ali Ghazi as a Historical Battle. He reconquered the old Kanem capital.

Idris Alooma as a campaign. His military campaigns are recorded in Arabic, but are translated. Feel free to buy that book. Sadly no one has shared information from it on the internet. He conquered the Bagirmi Kingdom, Hausaland, Air Sultanate and many more. Dunama Dubbalemi is also well recorded.

There is a speculation which states that Kanembu under Idris Alooma defeated the Ottomans. It is wildly known that the Kanembu got Ottoman guns. The Kanem-Bornu Empire and the Moroccan Saadi Sultanate were allied against the Ottoman imperialism so I find this theory vaild.