Impressions on the state of siege?

So following the Season Two patch I’m wondering how people are finding the balance of siege.

Personally I think it’s more or less as bad as ever. Perhaps it’s not quite as bad as it was during the ‘Age of Siege’, but in team games the need to amass siege units as you approach the late game feels as profound as ever. Despite constant reassurances that Relic wants to have good counter play to siege, mangonels and nest of bees are very hard to respond to without springalds because they do so much damage so quickly that rushing them, even with knights, is too costly.

The springald arms race is still very much in play. You need enough springalds to quickly deal with their mangonels, and then you need enough springalds to deal with their springalds. Personally I don’t find this very entertaining to play or to watch. You simply can’t afford to allow mangonels/NoB to be able to attack for more than a few seconds because their potential damage per second is so extreme. There is no other interaction in the game where such short periods of time can be so devastating.

Personally I continue to feel strongly that the balancing of springalds, mangonels, and Nest of Bees is deeply flawed and leading to situations where massing siege is not only viable, not only optimal, but absolutely vital.

The lack of friendly fire has never sat right with me. I don’t mind mangonels being effective against my ranged units that are away from the fray, but having them massacre my frontline that is in a melee with my opponents? It doesn’t feel realistic, it doesn’t feel fair, and it doesn’t feel balanced. Mangonels and Nest of Bees peak potential DPS is far too extreme for them to not feature this key drawback present in classic Age of Empires games.

Most of all though, referring back to (1) and (2), could Relic please reorient the balance of this game so that the key to countering siege is not more siege. No other part of the game works this way. You don’t counter cavalry with cavalry. You don’t counter archers with archers. So why do you have to counter siege with siege?

I play 2v2 and when I came back in last patch I found the siege meta was changed to most cancerous one I ever faced. I solely as chinese and during my +2k games I have maybe faced pure siege comp handful of times so my experience with “pure” siege was to none existing because it hardly ever worked and when it worked there was something else that caused it to work for example one instance was mongolian heights with wonder and it made impossible to push the crossings or mountain pass.

Anyhow the meta had in 2v2 in super late game especially against english was spam trebs which I found most cancerous form and it still going. Get 5-15 trebs and keeps, towers and keep walling choke point. Nothing will counter this because trebs insta kill anything that enters the area and snipe your trebs. This same thing still works but its very specifically tied to ability to force fight in single point and keeping towers, outposts, walls protecting trebs and now I feel its a lot stronger than ever before because its not possible to keep any other siege alive especially trebs that are behind walls.

Now what comes to other siege. For me everything else is dead outside of trebs. Reason is simple. It requires lot of factors that may not be up to you and right map.

In scenarios where player can place siege to choke point what ever its map based or player made with walls / buildings with unit stopping advancement of cavalry then the siege is stronger than previously vs cavalry. But lot of times this scenario is something that affects too many factors and its hard to pull.

Outside of this scenario siege is useless outside of trebs which goes back to how easy it is to set up such formation that trebs cant be killed with anything other than trebs.

Make outposts, keeps and walls and creep forward opponents base while making sure its not possible to run to your base. If opponent reaches this point only thing defender can do is to hope mass enough trebs to kill their trebs and push, but in reality the person who starts this has advantage in siege war because of production already in place and trebs in field.

If player tries to kill trebs with cavalry then outposts, keeps kill the cavalry and if player wants to be extra safe then all they have to do is put few units on top of them what ever its spears or something else will ensure favorable trade for you.

Also because siege doesn’t do that much dmg anymore to units. Bombards lost 70dmg to units which is massive which results instead of 1-3 shotting most units to 2-5 shot (delhi elephants are exception to this)

I don’t see any other siege usable other than trebs and I have decided never make anything else, because why would I? Just hope to position them perfectly while having investing bunch of population to protecting them alongside static d.

This meta is stupidest I have played during my time in AOE4. While I support 100% creating more counterplay to siege other than just siege, but if siege is so ■■■■ as it is now then whats the point of making them? 1k investment bombard is hard countered by 1 lancer that costs 240 resources and more you invest on protecting them less you spent on army and get overwhelmed in other areas

It’s fabulous, you just don’t think about it too hard and follow the trends and siege is perfect.

but cause 1vs1 never experience it, no one cares. 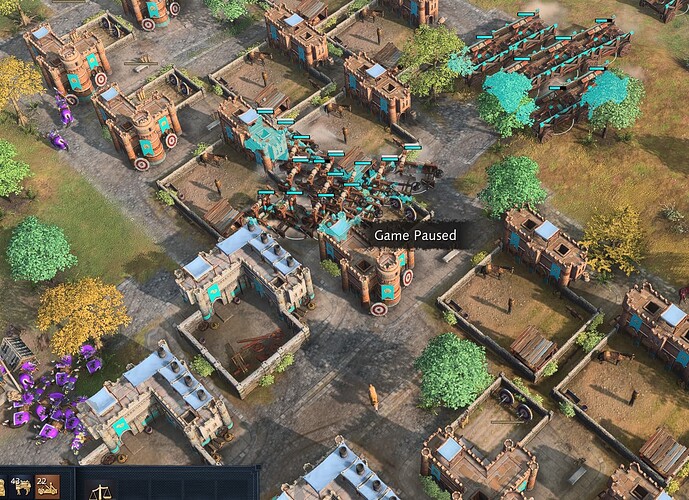 probably the gameplay we deserved (

In aoe2 you could also build 20 onagers and it would be deathball. **but you sould CONTROL this Deathball **
Control inculdes:

At least this would force mangonel player to micro/split mangonels.

If remember correctly terran sc2 tanks should be splited or it can be dangerous.
Now in aoe4 it’s better to stuck mangonels and get deathball.

I play mostly team games. I don’t get it. Why don’t you just build MAA, Horsemen and Springalds?

Siege is much, much easier to kill with horsemen and knights now. Just run past whatever infantry is in front, and charge onto the siege. Mass Mangonel isn’t good vs an equal-cost of cav, and even nest of bees require a high, high critical mass to be reasonably effective.

I still hate running into it late game

It seems to die to units as quickly as siege in AoE2 now. Seems fine.