Screenshot from a game called Divide and Conquer. Two normal-ish units face against each other. Halberdiers do armour-piercing damage, have more reach, and are able to keep the enemy from even touching you as the Halberds work both like a long spear and an axe at the same time.

With the same logic in Age of Empires. Who do you think would actually win?

Halberds win, because they were designed to catch Swords and cut through limbs like Polexaes, while also keeping formation, which Large swords cannot do very well.

IRL halbers would win, they have better reach… Also, neither halbs ir swords would cut armor, but a halbs hit could knock You down

Halberds could actually pierce armour, either with the back spike from a swing, or with the top spike after the opponent in knocked prone.

You can put your weight behind a Halberd strike, which actually makes it good vs Armour.

A pole weapon or pole arm is a close combat weapon in which the main fighting part of the weapon is fitted to the end of a long shaft, typically of wood, thereby extending the user's effective range and striking power. Pole weapons are predominantly melee weapons, with a subclass of spear-like designs fit for both thrusting and throwing. Because many pole weapons were adapted from agricultural implements or other tools in fairly large amount of abundance, and contain relatively little metal, they...

" Pole arms were common weapons on Medieval battlefields of Asia and Europe. Their range and impact force made them effective weapons against armored warriors on horseback, because they could be dismounted and/or penetrate said armor."

Late middle ages the answer to halberdiers was sword and shield light infantry that could penetrate the ranks. Think conotiero.

Between the two units in discussion i think that if halberdiers were trained to keep formation under pressure they would probably win.

Late middle ages the answer to halberdiers was sword and shield light infantry that could penetrate the ranks. Think conotiero.

Halberds were then use as Seaborne Infantry weapons, because you could use them aboard boats or on disembarkment, but you could not use Pikes effectively in those scenarios.

Pikes were heavily dependant of formation fighting to be effective, and were almost useless alone, while Halberds were not, since the weapon could hook or slash, unlike the Pike.

Halberds were then use as Seaborne Infantry weapons, because you could use them aboard boats or on disembarkment, but you could not use Pikes effectively in those scenarios.

Pikes were heavily dependant of formation fighting to be effective, and were almost useless alone, while Halberds were not, since the weapon could hook or slash, unlike the Pike.

you may be right but what period?

I was talking very late middle age where halberds or pikes were in mixed units with primitive gunpowder infantry.

did th-swords ever saw mass usage in warfare?

With the same logic in Age of Empires. Who do you think would actually win?

did th-swords ever saw mass usage in warfare?

Late Middle Ages, which is when Large swords and Halberds come into being.

halberds or pikes were in mixed units with primitive gunpowder

Halberds AND Pikes were used in the same formation. You would put Halberdiers in your Pikemen formation, so they could cover the Pikemen from any enemy that made it through the Pike line, at which point the Pikemen were defenseless.

Are we supposed to be talking a “regular” 2 handed sword here (even the comparatively tiny katana was already made for 2 handed use) or the massive zweihander type swords? Those last ones were overall pretty similar in use to halberds (similar reach, similar momentum behind a full swing, similar defensive uses for the tip), and several posts here have laid out the differences there are pretty well.

As for which army would realistically win: I don’t think realistically there would be two such armies. At best there’s a skirmish on a city square between a specialized mercenary company and the Papal Guard or something. I would probably agree the halberds have a bit of an edge based on the armor piercing back spike, but at the same time even in armor you’re going to be smacked up pretty good by a two meter long sword.

I also don’t think this works as an argument for buffing the spearman line.

Yes but these were short-shords & shield infantry with two heavy javelins each to throw before coming in hand to hand combat with the enemy.

I am talking about two handed swords, that i get the impression were mostly ceremonial or 1v1 weapons

Two-handed Swords were no ceremonial, they were battlefield weapons. However, they were never very useful, and so quickly fell out of favour, in exchange for Polearms, and then Sabers and Rapiers.

Pike & Shotte was so overwhelmingly effective, taht there was little need for any other non-gunpowder Infantry weapon as a main weapon.

Scotland had a heavy use of two handed swordsmen. But most used a trusty sword and shield.

Virtually everyone used the spear however for most part over the sword. Unless, they really lacked wood. A spear is basically a wooden stick with pointy tip. That’s cheap to make. Where as sword needs lots of iron to make it when compared to a spear.

Even the Romans, did not completely abandon the spear. They needed to use them to counter cavalry.

As I posted on other threads Portuguese did use Montantes but it was more of a Nobility weapon.
The heavy armour offered enough protection, although the heat would be a big issue. 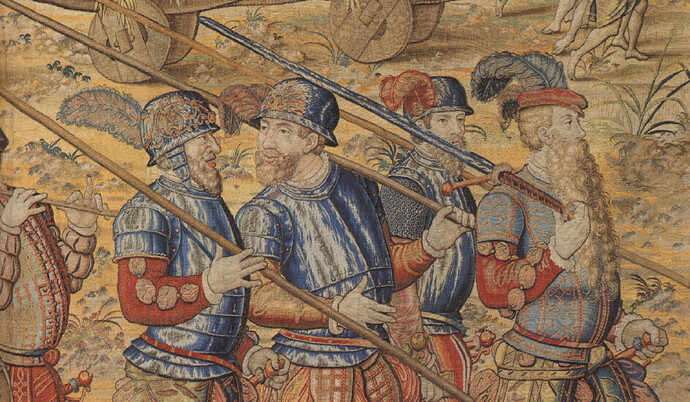 Montantes but it was more of a Nobility weapon.

It was actually a weapon for the bodyguards of the nobility and admirals.

The heavy armour offered enough protection, although the heat would be a big issue.

They used light clothing that dispersed body heat, beneath the armour.
As you can see in the drawing, the armour was mostly a Breastplate and Helmet, with sometimes some steel Greaves (but mostly it was leather boots with a chainmail layer between the leather, to protect from leg swipes by cutting weapons, like the Naginata).

True for their bodyguards aswell, but Nobles had training in Montante and Halberd in the context of India Campaigns (16th century), for example Lourenco Almeida, son of Francisco de Almeida.

Montante in Iberia became a symbol of power and prestige, hence why it got popular with the upper class.
I posted a source on other thread where 2 brothers used Montantes to defend (although the ship was lost in the end) against a ship boarding action.

Edit: My bad, I actually posted on a discord conversation, but I will get it xD

It also had to do with it being a black blade, and Black Swords were a portuguese “trademark” of the age.

The Carracks black sword, sometimes called a crab sword, is a type of sword invented in Portugal, during the 15th century, designed to be used by soldiers and sailors in ships and caravels in the Age of Discovery. It is characterized by having a guard with two protective rings, with the guard terminals in the form of two flat drops, the referred guard terminals facing toward the tip of the blade, and forming round large plates, sharpened to the point where they can be used as extra blades, becau...

The dark coloured blade instilled fear in the supersticious, and showed the allegiance of the owner.
In Portugal, they are known as Colhoneiras, literally “Testicled”, due to the design of the hilt.

Because Montante blades were also dark, they could pass as “demon” or “reaper” swords amongst many of the peoples the portuguese encountered.

A warrior from a more tribal and shamanistic society, may not want to face another warrior who bears what he has been told is a blade marked in Hell.

Obviously I’m not an expert, but crab swords were one handed if I’m not mistaken and usually used with a dagger on the other hand.

They were, but Montantes also had the characteristic dark blade, as you can see on the picture you linked.

Makes sense to use the same technique so it does not rust.

Found a different source:
Vs Ming a small naval battle:

“Pedro Homem put up an admirable fight, being “in stature one of the largest men of Portugal, and his spirit of bravery and physical strength were different from the common man.” He was the last to fall for he wore European plate armour and kept the Chinese at bay with a heavy montante until he was eventually taken down by a cannon shot.”