The worker counts in the upper left often incorrectly includes villagers who were gathering a resource earlier and are currently following a command to walk to a new location. These villagers should not count as wood, food, stone, or gold gatherers because they are being sent to a new location where they will go idle unless you tell them to do something else. Counting them as workers makes it harder for me to understand my eco at certain points in the game where my villagers are on the move (e.g. because they are running from enemies or being sent forward to help with the war effort).

Why does this matter? Imagine you are playing the grand finals of Hidden Cup 6 and you have 10 villagers on stone because you want to drop a castle. Once you have 650 stone, you select all the your stone miners and send them across the map to drop a castle. While they are walking, you notice that the game still says you have 10 villagers on stone, even though you don’t need to collect anymore stone. You frantically check your eco to look for the useless stone miners, and you don’t notice when the enemy kills your forward army and builders.

Or just imagine you are trying to maintain 7 villagers on gold so you can afford to make archers from 2 archery ranges. You have two gold mining camps. The enemy attacks one of your gold mining camps so you tell the villagers to run away. A few seconds later, while the villagers are still walking to safety, the game is still telling you that you have 7 gold miners, so you don’t realize you need to get more on gold to afford archers.

Villagers who are currently walking and have no commands to gather resources should not be counted in the worker counts at the top left. I believe that is how the game used to work, and I only noticed this issue in the last patch or two. 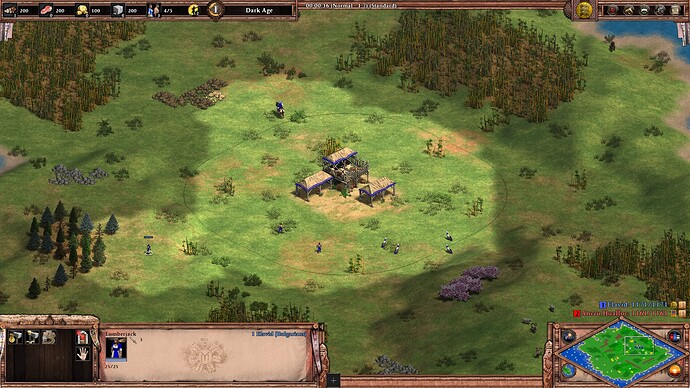 In the image above, the selected villager was told to walk across the map right after I told her to chop a tree. She is called a “Lumberjack” but she is not working on gathering wood, she will not gather any wood unless I give her another command, and she is not even carrying any wood. All the other villagers are idle and I did not touch them.

Yeah, it counts the amount of Woodcutter you have not how many are actually working. Else the vills would stop counting as Woodcutter every time they walk to the lumber camp to drop off the wood. This isn’t a bug. If it bothers you right-click an enemy building and it will turn them into vills and not lumberjacks.

No, that’s silly. The game stores a list of tasks that the villagers have been commanded to do, so it can distinguish between a lumberjack walking as part of his woodchopping duties and one that is just walking to a location on the map. If the game didn’t keep track of this, then how would the villagers possibly do the right thing when you command them to move or chop a tree? Sometimes they would chop a tree when they weren’t supposed to or sometimes they would just walk to a location when you actually wanted them to chop a tree.

This game uses a slightly modified Engine from 1999 - but whatever floats your boat mate.

It’s been 25 days. It would be great if an AOE2 developer or their representative could take a look at this bug report some time and respond, since it took effort to put together. You’ve been pretty good at responding and fixing the bugs I reported in the past. Thanks!

I checked this behaviour with my team and it seems that it is like this by design.

Thanks anyway for your report

I think it’s a bad design, because those villagers are just walking and will go idle without collecting or dropping off any resources unless they are tasked to do something else. But OK, maybe you guys have your own reasons that just aren’t obvious. Thanks for checking.