I made a post about unbalanced team games earlier, however, I am making a new thread here because that one kind of died.

Here is one example of a team game I recently played. It was me, player 4, and [redacted] vs [redacted] and [redacted]. The screenshots below show the stats screen as well as all of the player’s ELOs (found on AoE2.net). It goes without saying, this was not a fun experience for anyone. 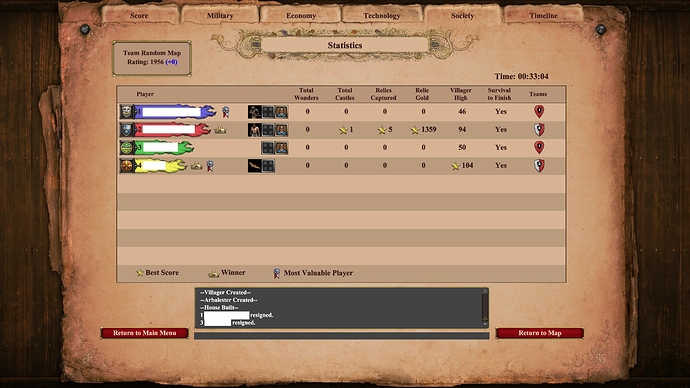 Maybe there was not many in the 2vs2 queue at the 1900 level at the time you matched. I’ve noticed a lot of the top player will more often match low because there’s more low level players online

I can understand some difference in ELO, but 1000 points? C’mon…

Honestly, this is exactly what everyone was worried about when we found out they wouldn’t show Elo in lobbies. Incredibly unbalanced games like this.

There is no reason why they shouldn’t display Elo in unranked games. Because even when not playing in ranked games, Elo was one of the best methods to ensure that brutal teams like this don’t get to steamroll everyone.

I agree with you wholeheartedly. They need to display ELO in unranked games. I’ve left games when I’ve seen ELOs of some players who join noob games, 1600+, sometimes upto 1800.

However, this was a ranked game and it is a matchmaking issue.

Per the forum code of conduct, do not call out players by name on the forums.

Don’t call out other players in threads. If you have an issue, take it to PMs or contact us directly at aoecommunity@microsoft.com.

I have revised your topic to remove username references. The team is working towards better player reporting in the game. Please be patient and obey the forum code of conduct until these systems are implemented.

The team is working towards better player reporting in the game

My mistake. The statement about the forum code of conduct still stands. Please redact player names when discussing unbalanced games on the forums.

Thanks for your active replies! Looking forward for to next patch

From what i have heard and experienced this problem is most common with 2v2, so a tip could be to only play 3v3/4v4.

I apologize, I was not aware of this rule, thanks for taking the time to fix it and not removing the post!

Honestly, this is exactly what everyone was worried about when we found out they wouldn’t show Elo in lobbies. Incredibly unbalanced games like this.

Unfortunately, even showing ELOs would not have helped in my game (unless they showed the opponents in the lobby too). I do always check my allies ELOs on AoE2.net before the game starts to see if it is at least somewhat reasonable (if I see my ally is like 500 points below I quit the game because there is honestly no point in playing that). This time though they matched me and the 2028 player together which looked totally fine… There was no way for me to know we were playing against two players whos ELOs were both ~1000 points below ours.

I do hope they start showing the ELOs in the matchmaking lobby, but mostly I just hope they fix their matchmaking system. I can understand making some compromise with the ELO range for the sake of reducing queue times, but not only was this range WAY too big, the game matched the two higher ELO players vs the two lower ELO players. That is undeniably a bug.

From what i have heard and experienced this problem is most common with 2v2, so a tip could be to only play 3v3/4v4.

From my experience, it is the most extreme with 2v2’s, but 3v3’s and 4v4’s are still rarely ever well balanced.

It reminds me of this:

I agree having one high and one low vs the other high and low would have been “balanced”, but it would still likely have been a terrible game to play because the two ELO players would be useless and there is little to no chance for any interesting team play in a scenario like this.