I really like the fact, that all the civs are gonna be radically different from each other. I would like the maps to be diverse as well. I think a good solution for this would be maps that are more interactive. Something like a small neutral village, where you can trade, or hire some warriors (like AoE3 native tribes). I think it isn’t much interesting to one map have a little bit more gold than the other or a lake in the middle etc. Do you have other ideas to make maps more interactive or diverse?

Cool points made here, I know the devs have said that AoE4 will adopt the “random map” functionality where no 2 maps will ever be the same which is unique to Age of Empires, but these maps can follow themes like you see in AoE2, certain biomes, water/ lakes as you mentioned - even the idea of “gold rush” would be cool where there is a large concentration of gold in the middle of the map as we see today in AoE2.

As for neutral buildings, this would be interesting too - I speculate that there are “neutral” trading posts to send your caravans to gather gold, I took the following shot from the gameplay trailer which seems to show mongol caravans going to a neutral market place (no colour identifiers on the building itself to show its part of a team)? 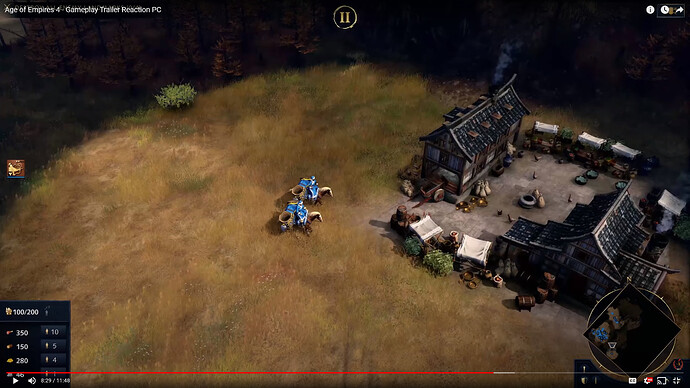 Thanks for the positive words!
I didn’t spot the possible neutral TP in the video, nice catch.
I just quickly wrote my post above, realizing that there wasn’t any posts about this (or i’m blind - possible) and i think that maybe a better phrase would be “unique features” instead of interactive. Because I would be thankful for anything that makes maps more diverse than just resources, hills and water layout. It could be a big swamp on a specific map, where units move slower, rivers where bridges need to be constructed or ruins, where you can find some gold - oh that’s treasures from AoE3… Some cool things that are unique to each map and non other has it. (Maybe a few if it’s hard to come up with many ideas, i don’t have more either atm.)
Sorry if my wording is not perfect, and hard to understand.

Does weather system add to that diversity?

Because I would love to see storms, rain and wind affecting the map gameplay in a small way.

Rain could affect the farms positively, for instance, and make animals hide.

It would also be nice to have the options on/off so we can choose if the gameplay would be affected by the weather or if it will just be eye candy.

Yeah perfectly get where you are coming from, I’m personally looking forward to unique features in the campaign maps and how cool triggers can be used for a unique single player experience - like enemy forces setting up traps that kind of thing/ cinematic triggers.

One of the long standing pillars of Age design is “The sun always shines on Age of Empires.” I’d like to see day and night, sun and rain aesthetically, but it’d be a major departure from age of empires to change that, and probably not in a good way. If they were to change that long standing tradition, it’d be a bad omen that they’ve perhaps not paid enough attention to the core design choices of the series. It’d be like ignoring grimdark when making a Dawn of War game…

Weather definitely could add a lot!

I didn’t know that was a pillar of AoE design.

I don’t think it’s a very smart “pillar” to be had and I don’t see the benefit of it tbh.

Weather has a lot of gameplay innovation potential and eye candy. The changes can be minor or really impactful. Vfx can also be toned down if they get in the way of visibility or completely turned off like D/N cycles in AoM EE

I’m a great supporter of the weather for the dynamic maps, for the strategies that may include:

I report here some ideas that came to me in the past, and that I read that remained positively impressed on me.

[Suggestions] For Age of Empires IV -

Weather chance per map:
Each map has his own design and identity. We all love playing RTS games in different types of environments, such as Woods, Snowy mountains or even the long Desert itself. But what if each one has a small chance to be in a random and different type of weather? It would make the game a different experience everytine you play.
Let’s say for example the Woods map of the trailer, it could have the following chances of weather:
Sunny: 65%
Rainy/Windy: 20%
Stormy: 10%
Snowy: 5%
So everytime you play the “Woods” map is never the same. And every map would have different percentages aswell.
Also having in game weather transitions would be fantastic. Starting a match with a great sunny day and then ending it with a great storm.
Gameplay weather impact
To add some realism and mechanics to the game, weather should impact in the game such a reducing movent speed by 30% in Snowy days or the Line of Sight also for Rainy/Stormy days. Yet keep it simple as that, without making it too much complex. As Isegreen said, it’s the balance between too complex for veterans and too easy for newcomers. AoE never had a feature like this before so there is no need to go full in depth neither.
Day / Night cycle:
Will just affect the line of sight like for example:
Day: 100%
Night: 70%
It would make the game both, beautiful and with new strategies and mechanics to apply.

[Suggestions] For Age of Empires IV -

Dynamic map: fog reduces field of view
Even the rain but less than the fog, and can make the ground more muddy (speed malus to the units)
Small paths possibility of malus to the formation (or wider formations, not practicable)
Possibility of ambushing strategies).
Some maps are typically more rainy / foggy / sunny than others.

Furthermore, rain does not necessarily negatively affect readability (just don’t represent clouds).
Not to mention how much depth it would add to the naval part…
…but seeing the trailer, i don’t think it will be included!