DESCRIBE THE ISSUE IN DETAIL (below). LIMIT TO ONE BUG PER THREAD.
While attempting the United States challenge ‘Mississippi’ as France, I revolted in the Industrial Age to become Canada, and found that the Ironclad card was blocked. Hovering over the card showed a message that I was “at the build limit for [that] card” and I have not been able to send it (and thus unable to complete the challenge).

It doesn’t seem like this should be the case, given that there is no problem sending an identical card as the United States (post-Revolution, as Britain)

What was SUPPOSED to happen if the bug you encountered were not present?
The “2 Ironclads” card would be available to send 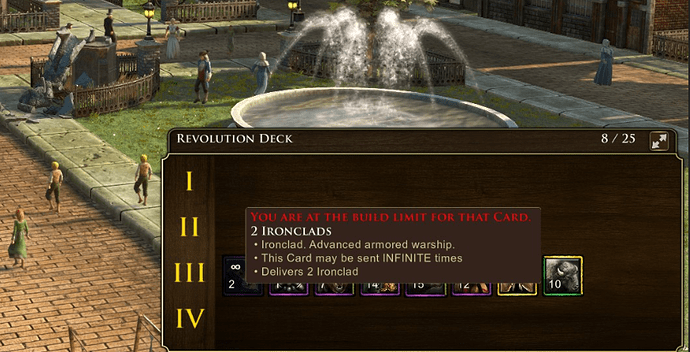 I think the screenshots speak for themselves

This has been previously reported here: Canada can’t send “2 Ironclads” HC Shipment due to Build Limit.

This issue is already being tracked by the team internally. Thank you for your information on the issue; this has been referenced in our record.