It is time we talk about Navy for upcoming Season 3

Hey, maybe the rework can cause a lot of people to try and like it, but from medium/high levels, they tend to prefer land battles.

I hope the rework will encourage more people to play naval battles.

But I generally have a huge dislike to many of the people who don’t like naval battles, due to never really giving a good reason for it, nor people willingness to give it a chanse.

Many games have land/sea some even air battles.

But sea units usually get unreasonable hate on em.

I’ve played many strategy games, some with far better naval combat and some with just as bad as current aoe4 naval combat. Examples being Total War series (empires having the best afaik), Wargame Red Dragon (interesting take on modern naval warfare), Heck even remember Red Alert series having some naval units which were fun to use.

But I keep seeing the same trend of people avoiding water whenever they can.
And very often falls into the explanation why they don’t like it is due to one of the same reasons my friends who dislike naval warfare is: Adding another level of strategy.

The only thing I don’t like about AoE naval combat is Pop-cap limitations. Pop cap is indeed needed, but some sort of system needs to be in place to allow people on the defensive to be able to secure shores and win back some waters.

Culverins and Springalds are the answer to push back ships off the coast, But they need longer ranges vs ships and you need larger quantities of them in order to deal with ships effectivly. Which leads to another issue.
Population cap when you finally secure the shore and able to build ships, you need to guard the little shoreline you secured with so many Siege that you hardly have Population left to effectivly build a navy that can fight back…

Personally I think one good way is Coastal defenses. In form of Towers and Stone walls with navy-specific emplacements, that has the extra range needed to protect your docks. And stone wall-towers with the same emplacement and culverin emplacement in age IV to deal with cannon ships.
This would actually allow one to effectivly build coastal fortresses to protect docks, that dosn’t eat up limited pop-cap.

I would prefer if they add something like a fire or a ram ship instead of moving explosive ship to age2. I think explosive ships should be their own thing, they are fun to use in certain situations, but as a part of a RPS would make it weird imo

I would prefer if they add something like a fire or a ram ship instead of moving explosive ship to age2.

you need 3 types to balance.
like paper - rock - scissors, can not do it with 2 types.

Not just that, but having demos in the rock paper scizor dynamic woule be weird. The ship will have one use and be dead later on.

As I mentioned before, the land units against the naval ones have been present since the castle era, so I propose that Espingarda be in feudal age, but without the bonus against siege or only with the naval bonus and that its statistics be reset in the age of castles 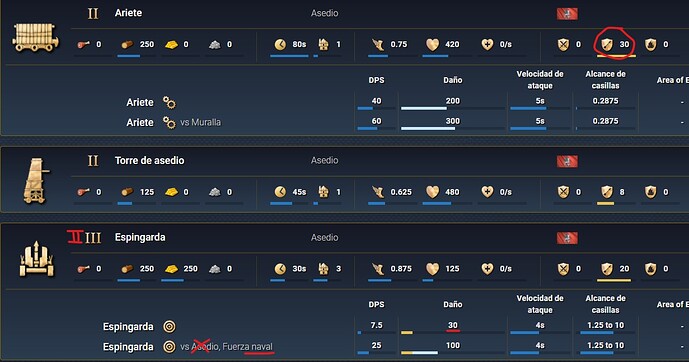 You know, they could just look at, um, every single existing AoE game for guidance. Age 2 basic warships that are countered by age 3 anti-ship ships that are overrun by age 4 anti-building ships seem to be fine in AoEO. Then pepper in some unique stuff for each civ, not give everyone the exact same ships, let history inspire civ design while letting gameplay have the final word, and abracadabra

Age 2 basic warships that are countered by age 3 anti-ship ships that are overrun by age 4 anti-building ships seem to be fine in AoEO.

That’s how it is right now in AoE4.

Sounds good to me then, but I believe aoe4 has a second warship in age 3?

2 basic warships that are countered by age 3 anti-ship ships that are overrun by age 4 anti-building ships seem to be fine in AoEO.

it’s all depends on water importance.
now: you loose water == you lost.
playable maps: 4 lakes (cause 4 different lakes somehow balance it).
In castle age (aoe4) it’s impossible comeback on water… if you remove fishing, than you need not fight for water… and you can go land, and win. (also option, but it’s not balanced gameplay on water).

it’s 1 type of attacking ships in feudal.
But even with 2 types: you just do unit which counter opponents).

2 types, it’s like: pikes + cavalry, why would you make cav, if pikes counter it. It can be “more soft counter”, but it will counter nomatter what.
Just mass typeA and win. If you manage mass “some pikes” , than cavalry will never win.

I have no examples from aoe4 or aoe2, where 2 units managed to “counter” each other.

Basically civs get archer ships in feudal, then ballista ships in castle that beat them (as well as demo ships), then cannon ships in Imperial. They vary from civ to civ with stats, upgrades, some can shoot while moving, etc…

Some exceptions such as Rus only ever getting archer and demo ships, but they get extra upgrades and their ships can convert back and forth between types, French getting an early ballista ship and an extra unique cannon ship, etc…

The rework that is coming will give 3 different ship types in feudal with a rock-paper-scissors triangle. We do not know yet what they will be or how they will vary between civs.

I never see many navel battles

ppl quit water maps right away after seeing how poorly designed and broken is naval combat… aoe3DE naval was sooo goood, but in aoe4 they really messed it up

The naval combat of AoE3 DE is very aesthetically pleasing, but there was no interesting RPS and many were not attracted to playing water either.

water was always very simplified in aoe games, if anything i hope 4 does something fresh at least in this area, given it failed to do so elsewhere

To be honest, now with the most likely upcoming Byzantine civ coming in.

I’m starting to suspect we will see something working within the Balance Triangle.

Where you will still have the Arrow Ships and Attack Ships, but an added 3rd ship, Boarding (Melee) ship.

The Byzantine will replace the Boarding (Melee) Ship with their unique Greek-Fire Ships. That has a slight range advantage over melee ship, but is strong for all types of ships if it gets close enough.

At least this is my perspective on what’s to come:

Dark Age: Boarding(Melee) ships will be made available for everyone, to allow some Dark-age aggression. Dheli will have an advantage in Dark Age due to their fishing ships can act as aggresive support.
Other nation Fishing ships will also be able to do a weak melee attack. (Think of Fishing ships as Villagers, where Dheli fishing ships are English Vills)

Castle Age:
Demolitionship will be added. That will function similar to how siege effects the game in Castle-land battles. (Counter mass blobbing).
Here we might see more new type of ships come into play. The French will have their Galleas (Mortar ship). Which is mainly a early but weak cannon ship that has its major strenght vs Buildings and defensive structures. As well as blasting some coastal walls that might prevent landing.

We might be able to see role of Supply-ships, that kinda acts like a monk, able to heal individual ships. And removing the healing role from fishing ships.

Imperial Age:
Cannon ships gets added, things become more cannon meta. But the use of Boarding-ships if they get in range will counter them pretty hard, along with Demo-ships against any blob.

This also helps giving reason to keep Arrowships in Imperial to help protecting them against these attacks.
And Attack-ships becomes more cost effective than Cannonships in dealing with Arrowships.

This encourages having a mixed unit composition in navy, and not solely spam cannonship.
This also helps balancing stronger cannonships such as the Baochuan, being slower and more exposed to Boarding(Melee)-ships.

They could also add interesting feature with Ship-capturing.
When Ships are at low-health (burning) They are capturable by supply ships. (This gives them an alternate role than just healing, and being much more aligned with being a “monk” unit at sea).

So short sum is:

This requires minimal change to the current game-engine and unit interraction. And runs parallel to how Land-combat works.

Then we might also get to see some new Mechanics at play if they decide to modefy how Ships act in combat, especially on the Cannonship part. Naval Formations, Body-blocking flat trajectory shots such as Springalds and Cannons. etc.

Shout out to the devs for doing something so well that Spirit of the Law made a video suggesting that AOE 2 copy it: Personally, I’m more hyped for this than the two new civs. I’m clearly in the minority though.