It’s not good for the game. When I want to play a game on Saturday evening, I open the game and see half of the lobbies are treaty. The rest is also mixed with AI and senario games. It is very frustrating for someone who just want to play a pick up game. Treaty lobbies taking up too much space! 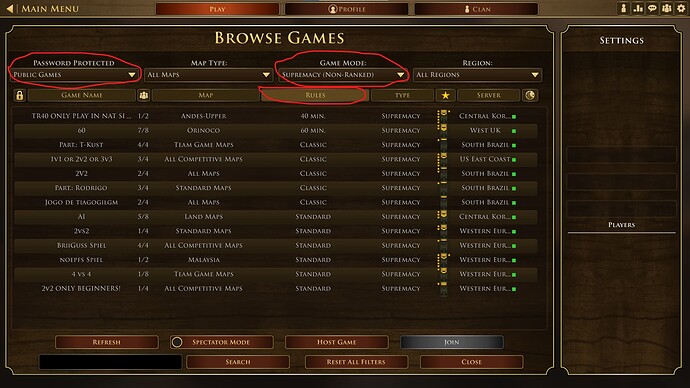 lobby1920×1080 189 KB
With filters it is very easy to find team games. First set Password protected to Public, then set gamemode to Supremecy to filter out the scenario/deathmatch/ect game modes, then hit the “rules” button so all the treaty games are sorted away from standard games.
2 Likes
jonasnee4671 September 19, 2022, 10:02pm #25

it is okay to disagree with someone, it is not okay to attack or belittle someone, this goes esp for you @ausmht4598

everyone have a nice day, and remember its a game, you should play what you like and think is fun that is the entire point. if you dont have an interest in an official mode, then just dont play it and dont come in and attack people who think differently.

Just use Mercs and use the lombard trickle with Usury. That’s as good an eco bonus as any.
Italy has access to one of the most insane mercs via an ageup, which can almost oneshot skirmishers

Even with a second factory Italy would need more treaty changes but it would certainly be significantly better.