Yeah that’s it, I’m done with this game.

Catch me in aoe3de, cheers

Crap graphics, physics, siegefest, blah blah blah this ■■■■ give me a headache.

cant believe they couldnt make something as finished as aoe3de but with better graphics, i cant believe the game lacks so many basic things yet… (comparing with aoe3de just MINOR DETAILS: ships, treasures, maps, players colors, treaty mode, map reveal after match ends…)

its so frustrating i feel ya… well good luck bro

AoEIV got 13 hours out of me then I went right back to AoEIIIDE: the superior game. The mediocrity and blandness of AoEIV made me appreciate AoEIIIDE all that much more.

Glad to have you back.

It’s weird because I never saw AoE 3 in good light. Always been mostly an AoE 2 player and recently I’ve began to appreciate how groundbreaking AoE 3 was, faults and all.

It was clear it was a game made by people who loved RTS instead of a committee to milk a known franchise. 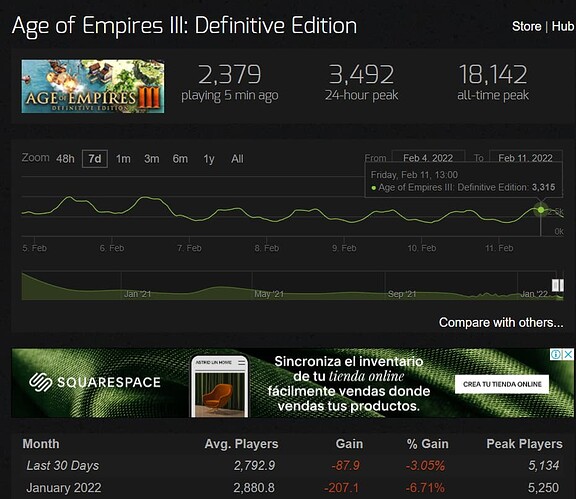 This isn’t the own you think it is.

Popular is not synonymous with good.

Adiós amigo. Hope you have a better time in your preferred game.

One day, when IV is launched in full, I’d like to have your thoughts on it.

Just installed age lll after so many years, what a difference, I can’t believe a game from 2006 has more quality than age IV…

It was clear it was a game made by people who loved RTS instead of a committee to milk a known franchise.

Reaally like this statement, AOE4 was popular not because the game is great, but clearly because of its franchise. That’s why a huge number left it after finding that the game was bad, and their disappointment is immeasurable. 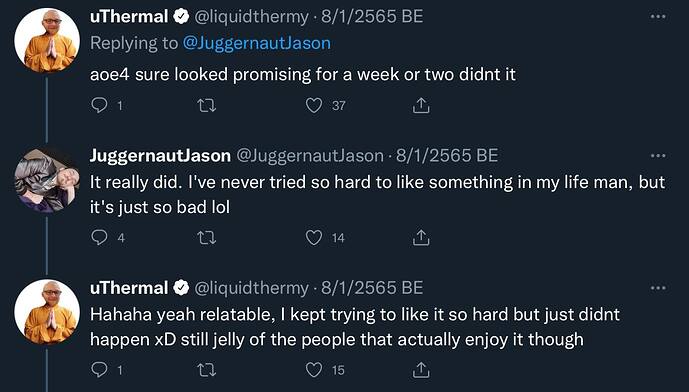 I doubt I’ll ever come back tbh, they’ll never make the changes I think the game needs.

They either won’t or physically can not with their current engine.

I don’t see the “finished” game being much more than what it is in it’s current state, and with that said I’ll never be able to truly enjoy it.

It’s sad really, I love the stealth forest and ability to put troops on walls, everything else in this game is bland/toxic though.

I wish I could take just those two things and put them aoe3, but overall aoe3 is still the far superior experience, especially the DE the graphics look even better, reworked campaigns and civs, I mean it’s like night and day.

And people actually use units other than siege!

Is Aoe 3 good? Still active and fun online?
Might give that a go myself or wait for the next new RTS.

I see most streamer or pros back to there older rts games. Even grubby(utuber and SC2 pro) went back to War craft. All his new content is just WC3 or SC2 now

People always with their “Black and White” and “Doom or Gloom” comments.
Grubby did not go back to Warcraft/Hots and he never left them either.
Is it so hard to understand, that people focus nearly 100% of their time on a new game?
He never said he left, he never said he is not going to make any content for WC3 or Hots anymore.
If you look on his twitch and youtube channel, your comment that “All his new content” is “just” WC3 is blatantly false.

It’s sad really, I love the stealth forest and ability to put troops on walls, everything else in this game is bland/toxic though.

Yeah, I agree these are some of the good additions to AoE4. Sorry to see you go.

AoE3 is probably my favorite game in the franchise, but I never wanted AoE4 to look too much like that, as that would mean it wasn’t going to be popular or competitive.

The RTS genre is difficult enough for the public and is not good be deep as AoE3 and as little “welcoming” as AoE2.

What is missing from the game is to fix the missing bugs, balance a little better and add quality of life elements of multiplayer + mods to come.

Can’t believe anyone think AOE3DE having superior graphics, that crap hurt my eyes.

AOE 4：The fall of the Empire

Lesser players. But that’s not because of the quality of the game.

It still is a revolutionary RTS with many innovative ideas and mechanics and most of the mechanics in AoE4 were already present in AoE3 by 2008.

So yeah, showing player count doesn’t tell you AoE3DE is the worse game. There are reasons other than quality for which the player count is lower.

Also, its not like the player count is horribly low. Its 3k-4k players, which is still a decent number.

Its 3k-4k players, which is still a decent number.

Considering how you can count on your hands the number of (true) RTS games with more than 2,500 players, it’s definitely a popular title.

If most RTS players would put things into perspective, they would realize how dead the majority of games are, and why. The vast majority of people will not continue playing a game, especially an RTS game, that isn’t quality or built to last, it isn’t like other games that can be garbage in reality, but popular via memes and big gaming channels propping them up due to the time investment being too high for RTS, so if an RTS game has even a few thousand players weekly all these years later, it must have been good.