Keeps are too weak

In AoE II, buildings castles was a pretty safe way of securing a location. Raiding under an enemy castle was suicidal, whatever you wanted to accomplish below it was more than likely not worth the expense of fighting under it. You basically had to leave that zone be until you had trebuchets or bombards in Age IV. Or if you were ballsy, you could attempt a ram rush earlier than that.

In AoE IV, trebuchets can be built in age III. So right away, keeps are weaker, because their hard counter can be produced earlier. But that’s not all.
I’ve also seen armored units successfully harass my economy while under keep fire and losing like 3-4 units max doing it. I’ve also seen them taking down the keep itself without too much trouble.

Now, you can upgrade your keep by making it sturdier and deadlier. That’s great and all, but investing this many ressources into something that can just be taken out for free at a distance by trebs or bombards feels a bit wasteful.

The thing is, if this was like AoE II where castles could also train units and research some technologies, it wouldn’t be as bad. But in this game, keeps are nothing but big towers, and yet they’re weaker than the multi function castles in AoE II. On top of that, they’re also more expensive. 800 stone instead of 650.

I’m sure some people like keeps being weaker, as one could argue it makes games faster paced. But personally, I liked placing down a huge building and knowing that that area of the map was secure

As you said, since you can build trebs in castle age I would like them to be way stronger.
It is also weird that they already struggle against a single ram.

In their current state you can just run around them without worrying too much.
( this was even after mounting 2 other weapons to the keep)

I can agree with you, the cannons are so powerful that they can destroy a stone wall with a few shots. Stone walls only help against a rush attack, but are too expensive for this. for the English e.g. it is worth building a Castel because the British can train troops there.

More HP for walls and castles could be the solution. I also think that a castle should do more damage

Nevertheless, I think the walls are made really cool … I just wanted to say that

its a matter of balancing for sure. We shall see in 4 weeks if things have changed.

Yeah the amount of time required to build stone walls and keeps really doesn’t make sense to have when siege weapons, especially canons can destroy your things so quickly.

With siege towers, rams and catapults being able to be built by infantry I wish Walls were strong enough to make use of these actually worth it rather than a sneaky flanking maneuver.

Yeah the upgrades are nice but way too expensive by that point the enemy has 4 canons and will melt your walls like butter regardless of upgrades.

Better to build stone wall with tower and your units garrison on top of the wall to defend dude. Trebuchets have a hard time to tear down every segment of your wall for allowing the army to rush in.

Have the same feeling about Keeps, they are underwhelming.
And by the time you make a Keep there are such huge armies on the map already that destroy your Keep in seconds. Also upgrades affect only that particular keep?! And also they dont produce any units?! (Except English one). Why would I even bother to male a keep?!

Also, why is it called Keep and not Castle? Castle sounds so much cooler. It’s a medieval game = I immediately think about castles. I want to play with Castles, not keeps. What the heck is a keep?

What the heck is a keep?

Keep is the more accurate term in fact. Castles often had farms and small towns within their walls. Keeps were the military fortifications (usually towers) inside Castles. In AoE what we build are mostly “un-castled” keeps. If you build walls around those keeps and put a few houses and farms in there, that would be a castle.

Helm’s Deep was a good example. The section behind walls at the top of the image is not part of the keep but it is part of the castle. 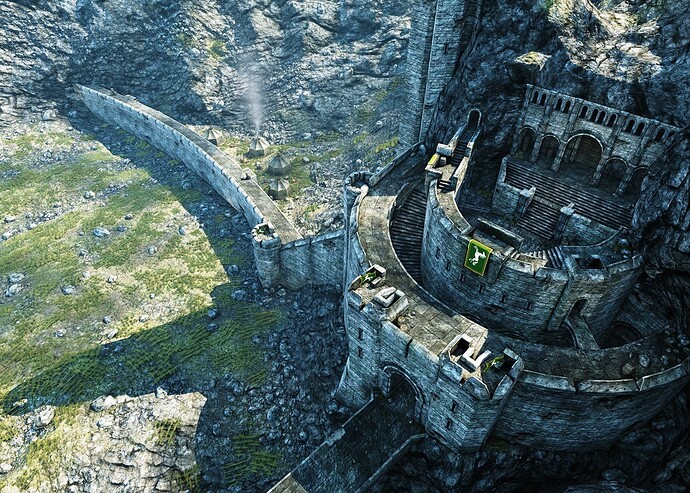 I do agree that they serve little purpose for being that expensive in AoE IV. Weak, not that much firepower and can train no units. I found myself defending positions with towers and armies more often.

I agree they should be called Castles. Everyone knows that’s their name, regardless of the fine print.

But more importantly, they are weirdly nerfed beyond recognition. They went from being the capstone building training unique units and dominating the landscape in AoE2 (and sharing almost identical roles in the later sequels) to being empty husks devoid of much role in AoE4. A medieval game with lame castles. It’s bizarre.

I think it makes sense they should be called Keeps, now that you can actually walk on walls
And I don’t think Keeps are weak, I think they just are

Have the same feeling about Keeps, they are underwhelming.

Underwelming. In AoE2 and AoE3 (fort=castle/keep) they are powerful and produce units. In this they are just a glorified outpost

Yeah imagine if they added a unique castle unit for every civ.
That’d be great.

It’s a weird thing for a medieval game to have lackluster castles.

I’m not all that competitive a player but my friends are super talented. So I use them to help me form more informed opinions/check my gut reactions to things. They are much smarter than me. They don’t use the forum and generally have given me the impression they don’t see the point. At risk of dragging others into this, here’s what one of the top 10 players in the game said to me about AoE4 keeps.

Yeah, and the trebs available in the same age sure diminishes their already diminished stature. Stuff like this makes it difficult for me to feel an overall vision for the game. Feels helter skelter where one thing gets yanked out of place it affects something else unexpectedly.

Yeah, keeps are expensive and weak. Not worth the price. I would make them really strong, like 40% HP and more damage, and also they should be able to produce most units even if is an actual English trade. But all this with the condition that you can build just 3 of them like max. So you will just build them strategically.

I don’t feel like getting into the weeds with keeps, but I just have to say:

You can’t directly compare the value of resources from one game to another, even if they are in the same universe. This game has a different engine, different gathering rates and upgrades, and different demands for resources. The value of stone in aoe4 does not directly correlate to the value of that same resource in aoe2.

I think I agree with OP, however HRE castle is pretty strong more even if you use the Elzbach landmark around it, not sure if works with relic also.

What I really don’t want to see in age IV are the castles vs castles no sense, castles throwing arrows to other castles, or castle rush outside your base, that is the most stupid thing in age2 game play, so stupid that original devs change it in age lll since they never wanted age2 game play be like that… hopefully Relic implement something to avoid this, I just watched the age 2 finals, 12 castles in map 12 castles!!! for the love of God.

I agree keeps need a buff. They die very quickly to trebs or cannons and they cost loads of stone.

In AOE2 placing castles is very impactful and satisfying decision point. In AOE4 they feel both overly priced and too fragile.

I’m not sure why they moved trebs to castle age, but if they leave them there, they need to buff keeps.

I am not sure what to think of castles to be honest. I realised that some if not all castles have some sort of passive ability affecting units / buildings in proximity.

English as the most obvious one with the “Network of Citadels”
Abassid Castles have a research in the Culture Wing which makes castles heal units around them,
For the Chinese i saw a tech somewhere which makes castles Repair closeby towers and walls iirc.
Mongols dont get castles. Didnt build a Castle with HRE so not sure if there is some sort of secondary buff. Dehli Sultanate also not sure what their castles can do in the end.

I am torn here, i like AoE2 castles and agree with the opinion that they are a cornerstone of mapcontrol, locking down an area until Imperial Age. On the other hand i like the idea that castles are somewhat of an “supportive” building for units/buildings around them.

All in all i think there is potential in the implementation of the current castles, but i think they should for starters do armor piercing damage like xbows to help against knight raids and stuff easier. Armor mitigates their damage to quickly.

I just felt, specifically as english, a Castle on its own was not that feared by the opponent, a castle with 30 Longbowman and some spears below in range of Network of Citadels, people thought twice…

Totally agreed, Keeps need a buff, should have perhaps +20% HP, as well as extremely high arrow armor, decent fire armor too. As is obvious, pretty much everyone here agrees. It’s so evident, it’s almost a shallow, sterile discussion…
PS. The English bonus has no basis in History. England doesn’t even belong in vanilla.