I was trying to get the Steam Achievement, Relic Hoarder, in which you collect all 5 relics in the 5th Khmer campaign mission. Was going fine, I collected all of them until unfortunately finding one that’s completely uncollectable behind sea rocks. I even enemied Dai Viet to get behind their walls to no avail, and no point where i can drop my monk off around the sea rocks can it get to the relic. It’s hard even trying to click the relic. I didn’t get an achievement for collecting all the relics that normally spawn, so this should be looked at soon. 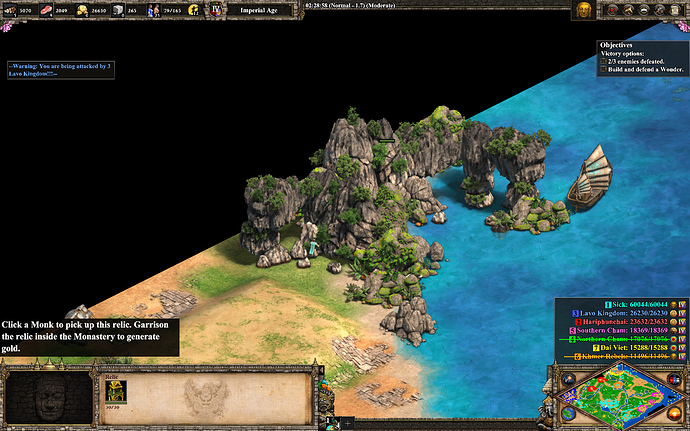 … is this a joke?
This makes the steam achievement relic hoarder impossible. I looked at a walkthrough video and didn’t see this relic (defined by the white dot on the minimap) show up in it. I’ve collected the relics from blue, the one in the corner, the ones you start with, and as you can see from the minimap everything in between and didnt get the achievement.
*

Yea I played that mission and finding the relics is unreasonably hard, putting one as unreachable is odd enough.
clearly bad design here.

Ah, my mistake. I failed to recognize that one of my monasteries were destroyed. I got the achievement after all

Still, no reason that relic should be there

As i remember its not bug
this relic is here to avoid relic victory timer, because wonder victory option is enabled in this mission (we have same relic at the Saladin’s 5th mission: JIHAD!)
achievement can be achieved and this relic will not count.

anyway you have good vision

You dont need to get that relic for relic victory. There is 9 you do need to collect