It is the beginning of the end for the KOTOW tourney, this weekend the remaining eight players will battle it out to take the title of champion of the biggest AOE3 tournament in 15 years. The action will begin live on Twitch at 13 GMT with our two Chinese finalists, Warsword and Absolute Eutopia and continue all day until eight becomes four. 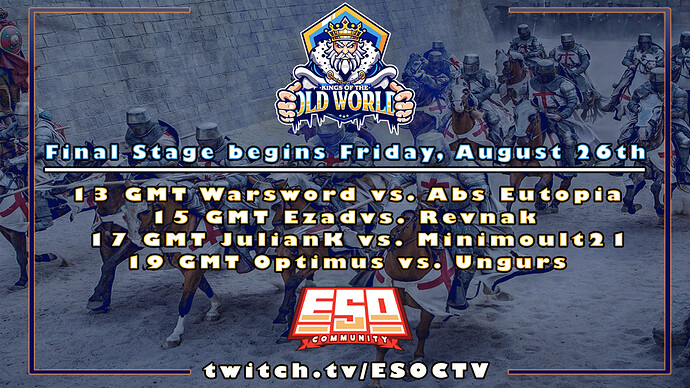 DAY 1 is here! We are going LIVE over on Twitch kicking the quarterfinals off with Warsword and Absolute! Come say hi and support these champions grinding to the top spot of King of the Old World!

KOTOW semi-final action resumes today at 15 GMT with Widgie and jagerchere on the call. Come join them and let’s all find out who the grand finalists will be!

Here we are… The Grand Finals… of Kings of the Old World. The FINAL day of the greatest Age of Empires III tournament is upon us. In all its glory let’s see what the Age of Empires III community is made of! From legends to newbies, old pros to giga lamers, no matter your involvement in the community now is the time to come see the Bronze Match between JulianK and Warsword, followed by the Gold Medal title between Revnak and Ungurs! This is it… this is the stream… Aussie Drongo and Mitoe will take you on a journey of emote chat spams… hundreds of thousands of channel points spent… sound clips of H20 shouting live on stream… its all here, its all LIVE, its all now: