Knights of St. John has Incorrect Flag on Save Thumbnail

The flag displayed on the thumbnail should be the flag for the Knights of St. John.

A British flag is displayed instead. 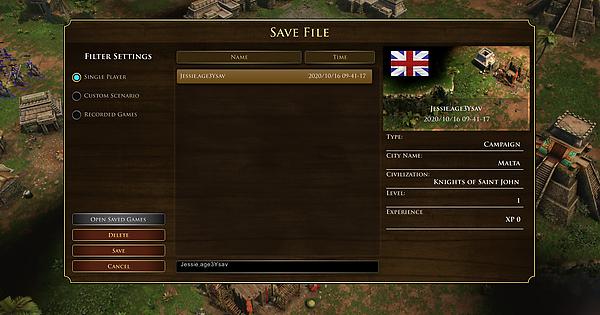 Yeah, it’s even displayed on your building flags and on your unit’s information in the UI when you click on them. Was an issue that was noticed in the Gamescom trailer so I am surprised that they have not fixed it since then and now that it has been released.

Not only the thumbnail flag, but even the Malta Home City flag is British flag.

[thumbnail] My attempts to fix some of the bugs with AOE III DE while we wait for official patches. Maybe this can become part of a community effort? Anyways, here’s what it fixes so far [0.1.0 - 2020-10-17]: Gave the Knights of St. John a new home city flag instead of the default British flag. That’s it so far lol Full details in the bundled readme.txt, but I licensed it under MIT, so feel free to share/public, etc. Downloads 0.1.0: Playable: https://mega.nz/file/RS4CDDII#oAQ1sCUmYA_…