"Known issues" list is completely insulting to the playerbase. Leaves out almost ALL ISSUES

I am pasting a screen capture of the current known issues list. NONE of the bugs that have been reported by the community are on the list. In fact the list is so sparse I wonder if they even listen to us at all.

These are the issues I know of:

Now look at the official list of issues below and imagine how discouraged players would be who are frustrated by all these issues. Can we get an explanation for this? 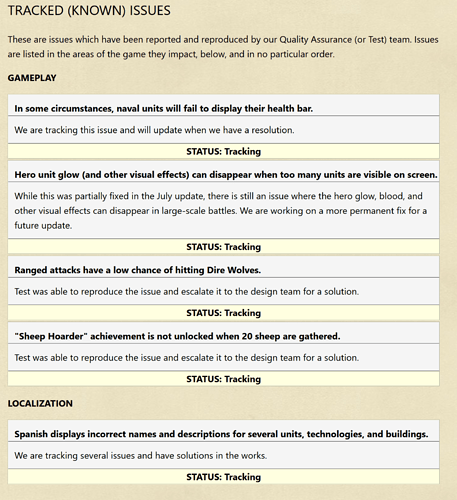 I think this is connected to the wording below the TRACKED (KNOWN) ISSUES - it says these are only issues which have been successfully reproduced by their QA / test team, they probably keep another list with the others in it(or I hope they do anyway) that is not publicly visible

Does that mean they didnt have fixed the late Game Frame drop, That half the Community here have since the Hotfix in November 2020? If Not, this is the most emberessing thing i have ever seen in my life.

That list hasnt been updated since Fall I think. I mean it says its updated recently but if you look with waybacktimemachine you barely see any change

It was definitely better a while ago with more detailed bugs that were actually urgent. It seems like that changed

oh, that’s naive. Even if they have an internal list they probably don’t know how to fix these issues, i mean else they would have already been fixed