Since we’re at speculation season I figured I might as well:

Leader: Hyojong of Joseon: So the fun thing is that it’s really difficult to find an appropiate leader for Korea in this period. Just go to a korean forum and propose having either Jeonjo or Myeongseong as the civilization leader and just come back and tell me how kindly they treated you…

At any rate, Hyonjo is an interesting figure. The absolute madlad was planning to invade the Manchu to try and restore Ming sovereignty and to accomplish this he performed extensive military reforms through the Joseon military, modernizing their weapons, introducing a sort of Pike-and-Shot formation tactics and overall just strenghtening their forces and fortresses. Unfortunately he died before he could go ahead with his plans, and the Manchu managed to consolidate their victories against the Ming before his plans to fruition had an opportunity to come to fruition. However, his reforms proved successful in the ensuing wars against the Russians. He also did agricultural reforms and other boring stuff.

Base Civilization Bonus - Researching Technologies heals all your units for a small amount.

Sungbyong Monk: I assume by now most people who’ve played the game realized Big Huge Games decided, for some reason, to have each asian civ have a Warrior-Monk figure for an explorer. So Korea couldn’t be anything less.

The Sungbyong is a melee infantry hero unit with the ability to stun and area damage attack that causes poison damage, as it is carrying a Nangseon. The poison attack doesn’t activate until you reach Commerce Age.

Mogjang - So I came to the awkard realization that Asian Civs don’t have a Livestock Pen by standard, so here’s my proposal. A building that combines both the Livestock Pen and the Stable. Good? Good.

Choga - Slightly more expensive than a regular house. Can do a one time muster of a mixed group of Sentries and Irregulars, for a cost.

Martyrs of Kumsan - Provides a Sentry and an Irregular for each infantry unit you’ve lost so far.
Nighttime Raids - Your Hero, Sentries & Irregulars can go stealthy.
Righteous Armies - Gives your Hero an aura that boosts Irregular & Sentry attack and hit points.
Hanulnim - Gives your Hero an ability that temporarily boosts attack rate of all nearby units.
Compunction - Outlaw units are better in combat and train faster.

Hwasong Fortress - Trains Artillery units. Makes all your buildings regenerate. Has an attack and is affected by Castle upgrades.
Age up Shipments

Sajikdan - Stops Sentries and Irregulars from losing health over time.
Age up Shipments

Puyong Hall - Can cast “Silence” over an area of the map, which decreases significantly the train and research rate of enemy buildings in the affected area, units slow down and can’t use abilities.

Lovely. Get a job with Microsoft

Some good ideas but also some pretty bad ones.

Losing buildings for a bonus isn’t great because you’re never getting anything unique unless you’re losing.

A stable-pen is just an extra cost to military building and disincentivizes building cavalry.

I think Korea should have a much bigger artillery roster. They had pretty advanced cannons: 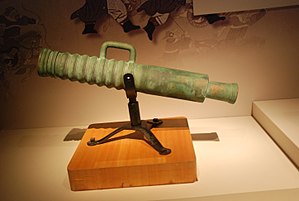 Cannon appeared in Korea by the mid 14th century during the Goryeo dynasty and quickly proliferated as naval and fortress-defense weapons. Major developments occurred throughout the 15th century, including the introduction of large siege mortars as well as major improvements that drastically increased range, power, and accuracy. The Imjin War in the 1590s marked the beginning of a Korean military revolution which saw improvements in cannon design and the introduction and adaptation of foreign-ba...

I’m not sure what “Shin Gyeongjoon” is, but searching that doesn’t come up with war wagons.

Maybe have their irregulars units through a shipment become trash units that don’t lose their hp representing the huge civilian resistance that formed during Japan’s invasion of Korea. Also they should have a unique fishing ship that in age 2 gains a cannon attack allowing it to better fend off raids.

Well, no wonder. Since almost all the info on the Shin Geongjoon is in, surprise surprise, korean. I’ve also seen them italized as Shin Kyongjun for what is worth.

They are what I mentioned however, An armored cart with a cannon on top, They were invented in the late 18th century when Koreans experimented further with wagon designs.

Now, is the main civ bonus useful only when you are already on the losing end?

Maybe, but what tells gameplay here isn’t the “main” bonus, it’s the houses and the wonders, as with most asian civilizations. I definitely needed an unique house design, and honestly having the Choga gather from Paddies is different enough from other trickle houses I think it justifies itself as it is very distanced from Torps or Shrines in how it plays, functioning a tad bit more like Kanchas, which is intended as both are meant more for turtley, defensive civilizations.

Are you taking Wars of Liberty for reference?

considering he was a WOL dev for years?

I just Asked because of his idea for a Wonder giving free villagers like on the MOD, I think it’s too OP as it is now, should be well balanced to be possible.

Updated the first post to make the bonuses less passive. Is the civ OP?
I dunno, but even most of the DE civs were OP at launch, so it’s not like I should care much.

Will I post my ideas for Homecity card shipments?

Who knows… only time will tell.

Yeah, I meant romanized, my bad.

https://cafe.daum.net/iterarymeet/8SMX/109?svc=cafeapi
According to this article, Shin Kyong-jun(申景濬) is the inventor’s name, may be not so appropriate as a unit name, Bulangki Cart could be more suitable. However, it seems that weapon never exist in reality, only recorded in Yeoam Jeonseo (旅菴全書).

Must have been my bad. I got a paper on the guy and probably got my notes confused because I’m not exactly fluent in korean.
At any rate, yeah, what I read checks out too, it was an experimental weapon, a few were made, as far as I could understand wasn’t really used in a war (What war did Korea even wage between the late 18th and early 19th century?) but it was tested.

It wouldn’t be the first not-completely-historical unit in the game however. If you read the game encyclopedia on the Flail Elephant it also mentions that the sources on it are… questionable at best. But since the War Wagon was the unique unit of the civ in Age of Empires II, it’d be only fair to feature it here too.

That kind of circular reasoning is a terrible justification for a unit, but sadly it’s happened before. Portuguese organ guns were never a thing, but Aoe2 got them just because AoE3 had them.