Lakota vs walls in 1v1 Supremacy

I had a Lakota vs Japan game recently. Japan player made a quick walls around the city and plenty of Yumi archers behind it. I tried to siege down Shrines all over the map but it was not enough to stop Japan economy.

So I started wondering - how to deal with walls as a Lakota? In my opinion they don’t have the right tools to do it:

Siege bowman and war chief?? Idk. Mortars should be available for free too. I think that just being available on 3 singke buildings is enough disadvantage

Lakota basically force walls though, I wall asap vs lakota because if I don’t I’ll be getting raided every 5 seconds.

The Lakota definitely need more proper siege units that are not reliant on the [Charging Ceremony] for taking down both walls and buildings. Having all of their ranged siege options locked behind technologies and cards, excluding the [War Canoe], is a really poor design choice for this civilisation.

I also agree with you that the [Club Warrior] is not that viable later in the game. The [Club Warrior] is the Lakota counterpart of the European [Pikeman] unit, and the reason as for why their infantry rooster is inadequate is because they are the only civilisation in the game that lacks an infantry unit who fulfills the role of either a [Musketeer] or [Halberdier] for them.

I mentioned this as well in my post where I suggested that the Lakota civilisation could get access to a second heavy infantry unit that can be trained in the Fortress Age. The idea that I had in mind would be a heavy infantry unit called the “Mauler” which would wield this weapon shown below that is known as the “Double Pointed War Club”.

The “Mauler” will essentially function as a [Halberdier] for the Lakota.

This War club was used by either the Lakota or the Cheyenne, or perhaps by both of them in battle. If the Lakota did not use this weapon historically speaking, they could then get a Cheyenne warrior that is armed with this weapon and can be trained from the [War Hut]. The Cheyenne tribe were apparently allied with the Lakota in their battles against the United States.

They should give all the natives Rams to fill the siege role. It just doesn’t work to have heavy infantry like Club Warriors and Macemen in that role.

bowman can siege from range if you need it after the age 3 card.

If you have managed to clear the map of shrines then the next step is build ur own eco with map control, not necessarily just stopping their eco

Dont their infantry have a 1.5 bonus against walls though, just spread your damage and they should melt like paper

Just want to add this in in case people dont know but for some reason in aoe 3, the torch attack that units do to buildings actually has a small area of effect. This doesn’t come up often but for walls this can be a way to eat through walls like its paper. So when siegeing walls, spread the attack across the wall pieces next to it, like the pilllars and you will deal significantly more damage to the main wall piece and crush through that wall like paper. do not fear walls, crush them

I guess you FI, send thst crazy 21 units plus upgrade card. Walling is already a burden on his eco. He shouldn’t be ahead. He also had to upgrade his walls.

In the particular match up with Japan you should still be able to end them very fast, before the walls become a problem.

In other match ups is much harder. If walls show up you need to go mortars, basically.

bowman can siege from range if you need it after the age 3 card.

Yeah, that’s true but Cetan Bowman with “Territiorial Claims” card will deal only 10 siege damage to buildings (15 to walls) which is small value. And Cetan is just an inferior unit compared to Wakina Rifle because of shorter range and long wind-up animation so no Lakota player really wants to make them in Age III onwards.

I still feel that after recent balance changes Lakota has no good tools to fight opponent who turtles. It requires too much effort and it’s inefficient.

it has 1.5 rof instead of the regular 3, so its the same as other units dealing 30 damage

Either Rams or something else. Now that I think about it, the Native American civilisations could perhaps get another shared siege unit that uses the “Staff Sling”. Though I am not sure if this weapon would suit them since it seems to be more of an “Old World” weapon. But in overall the Staff Sling isn’t really a complicated weapon to make because it is just a wooden shaft with a sling on one end.

According to the information that I have found about the Staff Sling it seems to have been a weapon that was used during sieges in Classical Antiquity and the Medieval era. The biggest advantage that it had over the Shepard’s Sling was that it could throw a heavier payload. This weapon is described by some to be a handheld catapult or trebuchet and they were apparently used as grenade launchers to throw incendiaries in ship-to-ship battles well into the age of gunpowder. 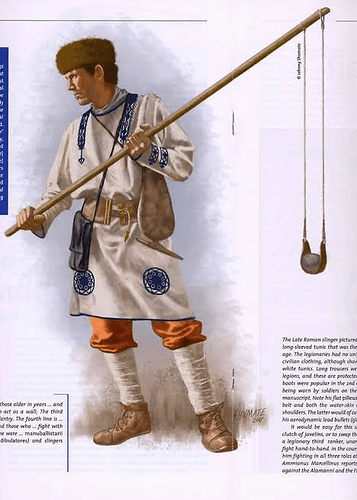 It would be best to improve and utilize the existing units before creating new ones. For example, they could make Rams more useful by giving them the ability to attack siege units in addition to buildings and ships. And in some cases such as Inca, they actually did adopt European weapons including cannons, so there’s not really a good reason not to just give them Light Cannons.

For the staff sling, the closest Native American equivalent would be the Lacrosse stick. It seems like it wasn’t really used in warfare other than one example where it was used as a distraction to help take a fort. There was also another case where the Erie started a war after losing a game. Games could be quite violent and it does seem like it was somewhat used as training for warriors, with some tribes even calling it the little brother of war. Correction - the word is for “little brother of war” is tewaaraton, not baaga`adowe like that article says.

Apparently, they were also used to throw grenades in the World Wars, but that’s far outside the game’s timeframe.

I could see it as maybe a unit similar to a Hand Mortar, where it’s base damage is extremely small but it has huge multipliers versus buildings and artillery. Maybe it could even be a shock infantry unit since it was used in an endurance sport. A name like Tewaaraton Thrower/Hurler/Runner could possibly work.

To understand the aboriginal roots of lacrosse, one must enter a world of spiritual belief and magic where players sewed inchworms into the innards of lacrosse balls and medicine men gazed at miniature lacrosse sticks to predict future events, where... 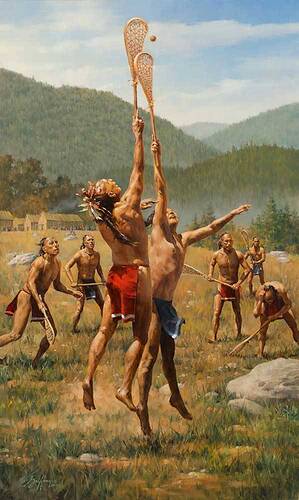 THE NATIVE AMERICAN SPORT OF BAAGA'ADOWE AND THE SIEGE OF FORT...

This is an excerpt from my post: THE COUNCIL OF THREE FIRES AND THE PONTIAC-GUYASUTA UPRISING. Lacrosse was influenced by the Native American game of stickball that the Ojibwe (Chippewa) called...

The Greenlanders’ Saga also mention some kind of siege weapon that might be a staff sling.

I didn’t notice that. Thanks for pointing this!
Maybe this card is not that bad.