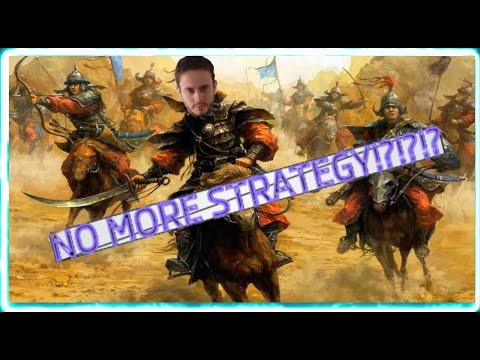 Did they actually take away age 2 early lancers from Mongols!? I thought that was a tech tree bug.

Its still in the Civ description.

dude i hope you’re right cause i legit freaked out. i’ve been planning on maining the civ since beta and it’s the only “ninja” civ so to speak as of now D:

i straight up hope it was just a tech tree bug. cause i saw some people playing on sunday on that invitational thing, and it was locked until age 3 D:

If was it broken OP. Let it be nerfed. We don’t need auto-win things in the game.

I would love to start the game with 100 war elephants with 1200 hp and and have bombard cannons on their back. But I know, it would not be balanced.

Pairing Riders with Mangudai in feudal is already strong so even if they removed early lancers they are still a very strong civ.

I think Mangudai got some buffs and Lancers moved to age III.

Did they actually take away age 2 early lancers from Mongols!?

If this is real Mongol will be totally rubbish… even worse than Delhi.

Mongols are pretty darn strong right now. Not the best civ, but probably just behind Rus and Abbasids. Maybe on par with the French. Kasva is destroying with Mongols.

The Khan is already strong enough and can threaten to kill multiple villagers. Not only that, the Khan can kill all the sheep if he finds your scout. Mongols have a lot of tools at their disposal which can be exploited with strong micro.

Chinese should get their +2 starting villagers back. The civ was the worst in the stress test and no high level player touched it because of how weak it was. Doesn’t look like it received any big buffs to compensate.

Would you describe how Mongols are strong now?

Filming yourself while driving for something that could be done with audio only… MURICA.

They have age 1 horsemen that allows them to be very aggressive and mobile early on. With the Ovoo they can easily mass military and villagers, whatever you need right now. And while they are raiding with a lot of horsemen and their Khan, they are still able to go up to castle pretty quickly and add mangudais or knights. The Mangudai is an exceptional raid unit that needs to be careful of other archers, but other than that he allows the Mongol to continue their early domination. The Elite Kahn also is insane with 7 range, 450 hp 24 dmg and all his buffs. If you can’t be aggressive against the Mongol yourself while he is raiding you, you will most likely end up behind. It’s not a good idea to turtle up against Mongols, leaving them the rest of the map. You need to compete with them and you need to try to be one step ahead. Or you wall up in a manner that does not leave you lacking in ressources. I feel like you need to build stone walls against the Mongols as that is the most effective way to end their raiding. The Mongols have weak points, but it is not easy to exploit them when they actually rule the whole map and can raid you at will. You have to try to hit them when they are migrating to a new stone mine and relocate their Ovoo.

I don’t know have you joined the first close beta test, what you mentioned early power of Mongol, was not difficult to deal with Mongol can even raid with 6 knight in 6 mins ,by just building outposts according to a pro player solution.

From your description also seems Mongol are strong no matter they have age2 knight or not.

If Mongol train horsemen in age1 they are in high risk if their opponent discover and just build a outpost.
Mangudai attack and hp is too low in age2 and they are expensive.
Ovoo is strong I don’t deny but seems is the only strong element for Mongol now.

IMO, if Mongol age 2 knight is removed, other civs age2 knight should be removed also.

Don’t get me wrong, I find early knights in general to be a bit tough to deal with. But the Mongols are so very different from the other Civs, it is not easy to actually judge them. I think the best you can do until tomorrow is watching people like Kasva. Check his vods as he has played a lot of games with Mongols. Right now he is playing Abbasids, but he has over 100 games with Mongols. So you will find plenty of Mongol action on his channel.

u cannot have 100 war elephants bro, they locked the pop to 200!
War elephant costs more than 2pop.

The Mongols are the only true cav civ. It just logically doesn’t make any sense.
There is a very famous old quote “A Mongol without a horse, is like a bird without wings”
They need to have lancers from the age 2.

This issue was raised in close beta but with all heavy-type unit. I also agree with this.

If you have noticed you will see although kasv kept controlling Mangudai for hit run heavy inf, the damage is super low to them. the loss if Mongols lose one of Mangudai will be very big. This situation will be even worse because knight can cavalry charge.
That’s why if Mongols don’t have age2 knight as cav civ, other civs also shouldn’t have.
This will take too much skill to use Mongols for just hit run but just a little return.

Well, if we are talking logic, the Mongols didn’t really muster heavy cavalry at all. At least not in the sense of the heavily armored European knight. There is little evidence that they used plate at all. It happened, but rarely and it never was full plate. The heaviest they went usually was leather and mail underlayed with silk to have arrow and stab wounds to be less deadly (which would make health regen more logical for Mongol riders than for the Royal Knight of the French. Just to give an example what kind of game design we are talking about. Relic doesn’t always make a lot of sense in that regard).

The heavy cav distribution is pretty weird anyway in AoE 4. It makes no sense that the plate manufacturer of its time and heavy cav enthusiast (the HRE, Teutonic Order) has the worst heavy cav in the game together with the English. It doesn’t make any sense at all. The heavily armored knight is European and also was perfected there. It is completely weird that every Civ has all techs for everything and only differs by unique mechanics and techs. There’s a reason why not every civ had the Paladin in AoE 2. And it is of the rather factual sort. This is something AoE 4 actually needs to do better.

And in regards to @firstaim7016 I can only agree that all the early heavily armored units pose some kind of an issue. Then again you need them to stand a chance against mass archers, especially mass Longbows. This is why and due to the fact that the MAA is quite slow, I only think that early knights are a core issue in general. If I am not mistaken, the French can go for Chivalry in age II already and that is, if used well, even harder to deal with. However, killing knights in Feudal also is a huge deal as they are very expensive so early on. I think we would need to wait and see how this plays out and if early knights really are an issue and if Mongols should get them back or if they should all just be taken to age III. And maybe everybody gets early MAA instead, so MAA simply become an age II unit. That would kill a bit of uniqueness here and there, but uniqueness can and should be achieved in different ways anyway. The possibilities are endless actually and do not have to come with these kinds of age restrictions.

The Teutonic Knights were smashed by the Mongols…
The Franks were afraid of the Mongol invasion so they regularly sent gifts to please the Khan.
that should be more than enough.
And the Mongols, don’t just mean the Mongols. it included all kinds of conquered civilizations in it and diverse cultures.

The Mongols never cared to wear a plate bcse it would slow them down. The European Knights understood that speed is crucial when the Hungarian Knights were smashed by the Mongol horse archers with ease. Heavy knights are super slow and the Mongols didn’t aim for the rider, they aimer for the horse as it was poorly armored. If the horse is down, The guy on his legs is an easy target to outrun or to shoot them down…

Moreover, about the armoury of the Mongol heavy cavalries, they used lamellar which offered great protection without sacrificing speed and mobility.
Oh, boi you need to read books, bye…