Landsknechts look cool no gripe there its just funny that their two handed swords are real life sized in game while other ones are a little oversized. In that video where they fight with man at arms their Zweihanders are same or even smaller than one handed swords used by their opponents.

because it’s clear enough as it is… wtf must people whinge about every little thing?

you do realise arrows got effed up because people were whinging they were too big, when they didnt actually see what they looked like in an actual game? and then after the devs made the arrows smaller they became incredibly difficult to see, the same knee jerking like complaining about 1 sword not being the right size…

I like new arrows they are still very visible and it looks million times better than before. What do you need to see anyway its not like you are dodging them or something.

And for the record I am not saying that they need larger swords just that it looks a little funny.

yes, we love this game and we care about every little things. Also size of weapons are important details, which greatly affect the appearance of units.

I agree, weapons of Landsknechte should be a little bigger, now they look not big enough compare to one-handed weapons, and hard to identify from a far zoom. 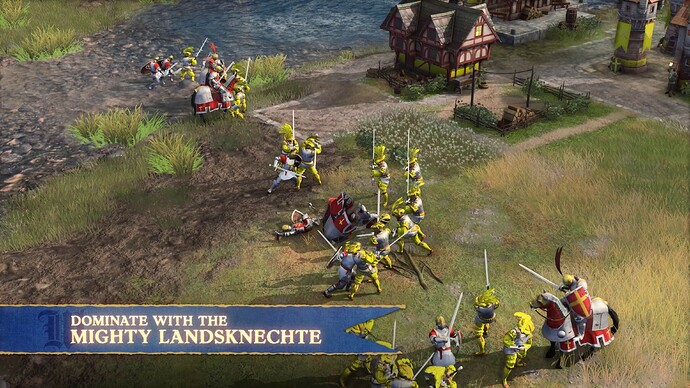 Their swords shall be bigger compared to regular swords.

Personally I don’t agree that 1h swords should be make smaller, current size is quite perfect imo. From graphic aspect, its size do looks like a hand-and-half sword or arming sword in 14-15c. And from gameplay aspect, smaller 1h sword would make them hard to recognize from a far zoom.

I think their size is more like longsword not hand and half sword. Its ok to cavalry have longer swords, because on horseback it doesn’t matter so much if your sword is bit longer than normal one-handed sword. For me Landsknecht sword is fine but swordsman sword is too big.

now they look not big enough compare to one-handed weapons, and hard to identify from a far zoom.

going by the images we’ve seen, theey could maybe boost their sizes incremently, but already the doppel stands out from other infantry, with both their unique hat, pants and singular weapon in place of a sword and shield

I like new arrows they are still very visible

What duality? Arrows were like ballista bolts before and I am not exaggerating it looked unbelievably ridiculous.
.

I personally find it a little bit weird that there is only one variation of landschneckt. Most landschneckt were actually pikemen.

Their most common formation was called the ‘igel’ (meaning hedgehog) where they would form a pike square (up to 4000 men) surrounded by two rows of halberdiers, zweihanders and crossbowmen (later replaced by arquebusiers - an early musket unit.) The zweihander - halberd combo was used to counter infantry. When calvalry attempted to charge the front line would retreat behind an impenetrable wall of pikes.

There was a small elite number that would weild a halberd or a hefty longsword called the zweihander (literally meaning two hander), these men were called ‘dopplsoldners’ (which means double pay) because they had to deal with double the risk.

When the landschneckt faced enemy pikemen they would sometimes employ a tactic called verlorne haufe (faurlaurne hope) where the dopplesoldners would attempt charge between the enemy pikes.

I see your point, but in a game like AoE, in which military units are quite abstract (compare to games like Total War and Mount&Blade), I don’t think there is a problem to give Landsknechte a more typical and impressive (though not most common) weapon.

So I am thinking this unit may have different uses in various stances, and thats is part of HRE unique ness is very adaptable… personally I hope not and they are just similar looking units.

Those are other units of HRE, not landsknecht.

they looked similar enough, but now I see the mace guy has a different helmet… good news.

I kind of agree. These should be man-sized swords almost. Spearmen have long weapons, but it’ll be easy to distinguish the Landsknechts with their different weapon + their very colorful look.

honestly after I think seeing the landschnekt shows how realistic sized weaponry would be fine. It has some great animations and detailing compared to other things I have seen.

but then there is the maceman, unit using like a 2 handed mace with a head sized club end that looks cool, but is a caricature in fine detail. A weapon like that, would have been too unwieldy. I am not saying it didn’t happen but I have not really seen them depicted much more than 1 handed weapons with a shield.

Agreed, they should be bigger… I’m wondering why they don’t have scaling standards for everything. Is nobody checking this against other models? I mean they completely failed when it comes to the buildings, but jesus, at least be consistent between the units

There is a difference between asking for unreasonable stuff and telling someone that what they produced (it’s their profession, not the player’s) looks off and breaks immersion (homing arrows) or even influences gameplay negatively (I cannot see what a unit is shooting or who shot my unit).
Other games get it right, so why are they struggling with it here?
Thats reasonable critique.