i saw a screenshot there is a modified version of the machine gun created by Leonardo Da Vinci or am wrong? and its seems is used by the english. 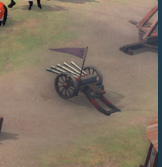 That is an Organ Gun, which was used by both the English and the French, extensively, in teh 100 Years War.
It was not invented by Da Vinci. The first known usage was in 1339.