Let's discuss cards that are not useful in the game

At the same time I think the Boxers and villages defenses should be turned into one
card
Specific effects villages can call small packs of lrregulars and setries and town center attacak incteased ,lrregulars and sentries no langer lose hitpoints.

This Thoroughbreds card in 2007 ，France can reduce the training speed of cavalry。 so that Cuirassier can train instantly, this is very op, but in de this card only reduces the training cost, which is obviously not enough, my suggestion is to give the cavalry adds 10% movement speed.

I think this sword saint card should also be strengthened. The current effect is to increase the movement speed of the samurai by 10%, and increase the food and gold by 10%. Currently this effect is weak.

My idea is to speed up the melee attack by 20% on the basis of the original 1.5rof and turn it into 1.2rof

I think that could be dangerous since samurai already are very upgradeable having the ability to get +45% attack with home city cards (not including Daimyo + Golden pavilion + Japanese consulate) 1.5 rof → 1.2 rof is effectively 25% more damage that scales with all the other cards/upgrades. Maybe it could be good instead to remove the increased food/gold cost from the card.

I’ll remind you again the kanya cards age 4 and the musket rider card are even worse.

These need to be changed

The cuirassiers are already tanks, give them other buffs and they become Monster trucks

A lot of the unit shipments could do with updating so they fit the resource value of 700 in age 2, 1000 in age 3 and 1600 in age 4 or at least roughly. The advanced mill, market, estate cards should also all be grouped together in 1 card and give some other benefit.

What is your opinion on cards that buck this trend? Example is 3 settler wagons for Germany. Ignoring the uhlans it is still better than 5 villagers. Though you could argue it is only 600 resources, the train time saved in creating villagers is also something to factor in. Just like when getting outposts wagons as a shipment, saving on build time makes up for the under value of amount of resources the outpost are.

i think this was the intent, but the result is that they are one of the absolute worst civs in age 4. literally their light cannon are the only thing that redeems their age 4

Maybe that explains the new cards mostly being age 4. Goons, siege upgrades, 10 mallets. Originally they were suppose to be a turtle civ, maybe it will finally pan out

It’s quite funny to use all their cards for extra war huts and just spam 20 war huts using the travois dance. 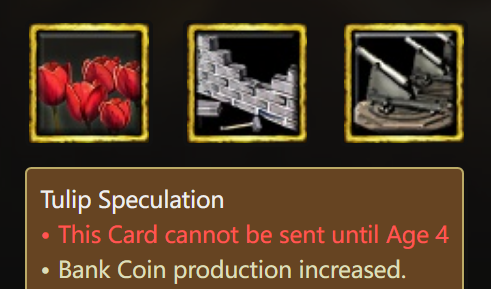 usually in 1vs1,it is equal to a bank.

Yeah no doubt. Was talking about age 2 3 settle wagons for Germany, not general age 1 3 villagers.