Let's talk about the Incas 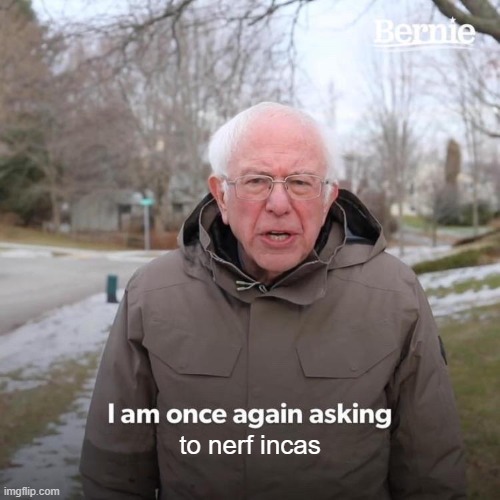 Well, jokes aside, I think we all saw what happened yesterday between Kaiserklein and Kynesie, for those who didn’t see it, here it is.

And although yes, we all laughed a lot when we saw a stronghold behind his base, the truth is that it is something serious.

Summing up a bit of everything that has been talked about, this is what I always read.

What do you think? In my opinion, we have to work on some points, especially the stronghold one, but compensate the Incas with buffs, because imo they are going to be too weak, and we don’t want another Sweden.

the problem is fort garrisoning (which has no place in aoe3) and huaracas, which just counter too many things. they have siege so they can immediately pressure your base. they beat falconets, so they can easily counter your attempt to destroy the fort. they also trade even or beat skirms, so they can beat the units you send to counter them. their only hard counter is cav, which they can easily avoid by garrisoning in the fort. the only other unit like this is Iro light cannons, which are available in age 4, cant garrison in anything, and still lose to culverins, which huaracas don’t.

need to either nerf fort garrisoning or nerf huaracas or ideally both.

Oh thats why his post on the forums yesterday lol

The stronghold is incas main play and without the garrisoning they become extremely weak. Kancha boom has already been nerfed to the ground by making them 180 wood each for what equates to less than a vill on food. The kancha big button was also nerfed hard now it’s 900 res for 4 villagers in age 2.

You can force inca to play age 2, or just be patient with the fort. If inca FF they don’t have a crazy eco behind it and are relying on their shipments to the fort. With enough cav you can stop the huaracas advancing within range of the falcs and attack the fort and huaracas.
The easiest option is to just make petards, the stronghold only has 6k HP. Make a handful of petards and push the fort with cav as you send the petards in. If he pops the huaracas out, he’ll lose them. if he doesn’t then the fort is destroyed.
I can’t have been the only 1 wondering why kaiser didn’t just make petards instead of sacrificing so many units repeatedly. Way more res lost in units than the cost of a few petards.

With enough cav you can stop the huaracas advancing within range of the falcs and attack the fort and huaracas.

you can’t because they can just garrison in the fort.

falconets out range the fort though and the huaracas. They must come within range, when they do you pull cav forward and force them to garrison. It’s more complicated doing this anyway, easiest to just petard the fort.

Like others have said, what really needs fixing is fort garrisoning and huaraces. Every Inca player now does the fort and huaraces “strategy”.

Also, I don’t see why chimus should be so much better than coyote runners at pretty much the same cost.

Aclaración: Me refiero a algo parecido a las civilizaciones del Age of Empires 2

the problem is that huaracas can only be countered by one very specific thing: baiting them out of the fort and getting a cav surround. no one unit is like this. because there’s really only one way to counter them, its very easy to plan against this counter. just have some pikes or bolas on hand. with every other unit, there are multiple options for dealing with them. not so with huaracas

Only because everything else has been nerfed into oblivion. Kancha boom wasn’t great to begin with certainly far worse than a brit manor boom, dutch bank boom or mexican hacienda boom. So they changed the wood cost to 180 wood from 135, max kanchas is like a half a brit manor boom in eco for similar cost and only food.

Inca kancha big button opening was good, got moved to age 2 and now costs 900 res for 4 vills. Inca got an extra vill to start then it was removed. 2 war hut age up changed to 2 builders. Cost increased to units. Schooners removed. Building hp changed to a team card for 25%. Age 3 cards nerfed to less units, infinite huaracas changed to 1 time only. Chasquis nerfed. New kallanka card completely nerfed into uselessness.

I’m sure I’m forgetting other nerfs too.

Yes, it is very nerfed, and despite everything, it is not really enough. It needs more balance, but as I said above, you have to apply buffs to compensate or we will have Sweden 2.0

It’s more the issue with the weird design of the huaraca, it being more like an abus gun when it should be primarily anti-artillery. They could make it worse vs infantry if they buffed it vs artillery. Inca really struggle late game vs artillery and skirm mass, doesn’t matter in 1v1 but in treaty and team they have nothing to deal with mass artillery and skirms, similar to aztec though at least they have arrow knights.

If they made huaracas out range falconets or gave them significant siege resist then I’d be in favour of nerfing them vs infantry. Currently they perform poorly vs artillery and are not cost effective counters to train.

I don’t think they’re even close to being on the level of old sweden though.
If you expect this inca fort FF you can try and prevent it, go very aggressive age 2 or age 3 try and prevent a good fort placement, unless it’s right outside your base it’s not good because the huaracas need to move too far from the fort.

Petards just deal with it anyway it is much lower hp than a euro fort, train a few then push the fort with a decent cav mass, if huaracas pop out then right into the cavalry, if they don’t fort is dead. Port sending building hp makes each tc have more hp than a euro fort for comparison. 27K+ total hp with its 3 tc’s. Stronghold is only 6K.

I don’t think they’re even close to being on the level of old sweden though.

I was referring to when Sweden was nerfed when African Royal came out and was unplayable until the last update, I don’t want the same thing to happen to the Incas with too many nerfs.

If you expect this inca fort FF you can try and prevent it, go very aggressive age 2 or age 3 try and prevent a good fort placement, unless it’s right outside your base it’s not good because the huaracas need to move too far from the fort.

It is very difficult to avoid it, because the chasqui can receive the shipment anywhere on the map, it is extremely versatile

Petards just deal with it anyway it is much lower hp than a euro fort, train a few then push the fort with a decent cav mass, if huaracas pop out then right into the cavalry, if they don’t fort is dead. Port sending building hp makes each tc have more hp than a euro fort for comparison. 27K+ total hp with its 3 tc’s. Stronghold is only 6K.

Not all civs have petards and the hp of the fort can be easily increased with cards, it is also rebuildable and only costs 700 res. Not to mention that he can garrison units and can be stealthy xd

There’s going to be something most civs can do though petards or not. in the game vs kynesie kaiser just made mistakes, firstly choosing germany again after already losing the match up.
Even choosing brit and sending the new meme card for longbow they’d out range the fort when sieging lol. There’s way better civs to choose vs this inca strat than germany I think.

If the problem is with the interaction between forts and huracas specifically, we could just isolate it and make it so only huracas cant be garrisoned (like the light cannon)

Huracas can also be nerfed to accompany that as well, I think a combination of the the following:

They need a good buff vs artillery if you want to nerf them vs infantry though otherwise they’ll be totally useless and inca have no answer to artillery. They only have 20 range currently. They get destroyed vs falconets normally without a stronghold to retreat to.

the fact that inca was given an infantry to counter artillery, 3 heavy infantry to counter cav, and no ranged cavalry tells you all you need to know about how awful the roster was designed. Huaraca are the only thread the civ is hanging by at this point. The unit is unsalvageable in it’s current state and it desperately needs an overhaul. I’d much rather see inca have a yabusame or rifle rider style unit than a unit that literally reverses the counter system of artillery > infantry.