Let's vote about the view of sportsmanship in 1v1

totally agree. also smurfing is only realy an issue for the first 10-20 games until you reach your actual rank. almost all the pros have smurf accounts but they very quickly reach their correct ranking

I just randomly pick up an smurf example.
Till he climbed up over this level by playing 94 games with 83 win games it means there are at least 60 to 70 games which were totally not started at a fair level.

Also, I think the main issue is not only about how many games it affected, it’s about how you interpret sportsmanship is.

To me, smurf just like cheating the weight in boxing just to get an easier win which I won’t respect.
In this post I try not to comment or judge other point of views.
I would rather want to know nowadays how’s the majority in the AOE2 community define sportsmanship is. See if there’s any difference in 10 years ago. 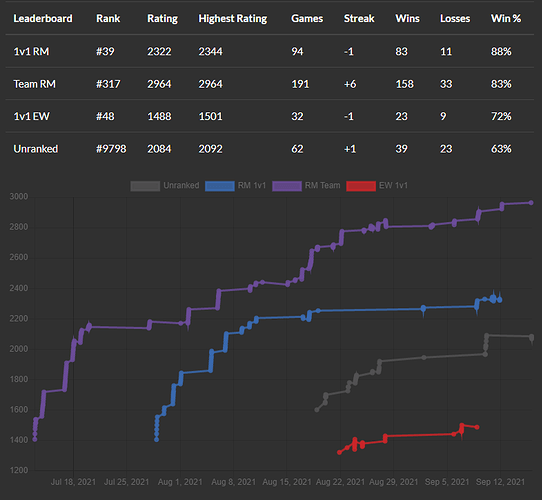 are you referring Team game? personally I haven’t played TG for a while due to its unfair design.
But I think the vote can apply in TG as well.

I love to play solo TG, but after only getting crazy people here, I think Im thinking to go back to 1v1

Kind of off topic of this.
And actually I tried to summarize a 50 games stat as a solo player and pointed out what’s the problem of TG is. But seems no one really interested in it as solo player in TG is not really a majority group.

so I just gave up playing TG anymore.

I am a 16+ in 1v1 and around 25-26+ in TG. Below is my 50 TG games playing in solo queue. Soon or later, there will be less and less players playing the TG games because solo players will start noticing that they are used to shorten premade team queuing time and helping them on their unreasonable win rate and elo only. Few months, or a year later, when the player base in TG getting worse, if someone remember this post, push this up and let’s see what the queuing time it will be when people clai…

Considering most players are civ pickers, S tier civs in particular, you cant expect them to call themselves out. Let’s go Mayans Franks.

Aside from smurf all these options don’t effect sportsmanship at all.

Hidden to enemy Civ picking is a wonderful boon to the playerbase
We could do without mirror tho.

No gg is fine, the thing you’re looking for is players being rude, convulsing dumbly via written about losing to something they disagree with, games taking too long with their short attention spans, disagreeing in rude fashion about how you play, or blatantly insulting the other player in one way or another. Rude people in general and players who do so knowingly just to be toxic are the worst. Another type is the player that constantly pings things he wants done on the map over and over again and if you don’t do it ‘perfectly’ or ‘fast enough’ he/she just insults you or eventually rage quits while calling either you or the entire team useless.

Easy, just nerf all those S tier civs to be on line with others like Vietnamese and Koreans, then they will realize the civ variation

I’m all for it, nerf Franks Britons Mayans Chinese etc.

It takes a serious lack of manhood to blame the civ balance in order to justify the systematic abuse of the top 5 civs, guys just go random, like TheViper, like a true sportsMANship.

I can tell many of you never played against forward dark age villagers stuff… A luck based “strategy” that is just meant to annoy the opponent and deny him any fun there can be in a game of aoe2. Very similar to hiding villagers in the corners.

I found that it’s kind of funny that some players who doing laming oftenly, they would type gg at the end game.
and when they are being lamed, they just end the game without gg.

I am kind of curious about what do they think about the sportsmanship on laming.

Some players are more inclined to be positive about the game if they happen to have positive feelings throughout. Those same players might take a drastic turn in behaviour if even one thing ticks them off. For instance I’ve had a teammate who got pissed because my buildings or base happened to be built slightly in his/her base area and refused to play because of it, walled in friendly resources, etc. Griefing in general is childish, and I suppose is to be expected to be seen from time to time when a player is immature and undisciplined in how they conduct themselves online.

Those who have positive feelings taking enemy boar yet show signs of griefing in even the slightest form when on the receiving end be it with lack of gg or taunting the enemy because of it or simply showing negative behaviour are immature sportsmen. Laming boar is a good part of the game and if one loses their boar with one method or another, they can do better next time and would do well to learn from their experience.

Losing a single boar is easy enough to come back from. A second boar loss is troublesome but is also something that can be worked around.

Honestly nowadays I just go full laming, it is the only way to counter laming. I always type gg at the end tho.

I don’t hold it against people who boar lame but I will probs just quit if they do. If they want the win that way they can have it, its just not how I want to play the game. No hard feelings though, I will still give a gg.

You also missed people who say “gg ez” off the list. Don’t know why but that always pisses me off.

You also missed people who say “gg ez” off the list. Don’t know why but that always pisses me off.

Yea, 100%, a lot of people could be more gracious in defeat, you just won the game mate, chill.

I for one am a simple gl hf, and gg wp’er, common courtesy and respect for your opponent, whether they’re better than you or worse, even if you lame the ■■■■ out their boar or have messy dark age militia and vill spam.
I truely don’t understand what gets the cocky-victors off about spamming you how easy it was at the end, like sure a bit of sarcastic gamer culture sometimes, sure whatever, but theres a line of enjoyment there.

Also once been accused of being a smurf and laughed at after loosing a game? That was one of the weirdest experiences. xD

I don’t hold it against people who boar lame but I will probs just quit if they do. If they want the win that way they can have it, its just not how I want to play the game. No hard feelings though, I will still give a gg.

I don’t see anything wrong with that. Sometimes you know in Dark Age that the game is lost. When you’re down hundreds of food and can’t even click up before a dozen scouts show up, no way to produce spearmen and they’re breaking through your quick-walls.

No reason to struggle from a bad position for an hour, just gg and let them climb the ladder. At some point they’ll get knocked back down. I value my time much more than my elo rating anyway, haha

I go with the scourged earth policy if you lamed me. If I could cause you physical harm, I probably would in the moment, although I’m usually a pretty nice individual who tries to make people happy.

But lamers are just showing their true colors in my opinion. Crap people who can’t win without abusing one of the crap mechanics of AoE2 that has never been replicated in another rts on purpose. They probably kick puppies.

i think lameing is a great part of the game. lamers should be celibrating by doing what they can to gain a slight advantage. to me laming boars is no more annoying then getting scout rushed or outmicroed